Rockwell Automation (NYSE:ROK) lowered its full-year guidance during its first-quarter results presentation, but as I write, the stock is up 4% year-to-date and easily beating the S&P 500 and the broader industrial sector (measured by the iShares Dow Jones US Industrial ETF: IYJ in the graph below). What's going on and can it continue? 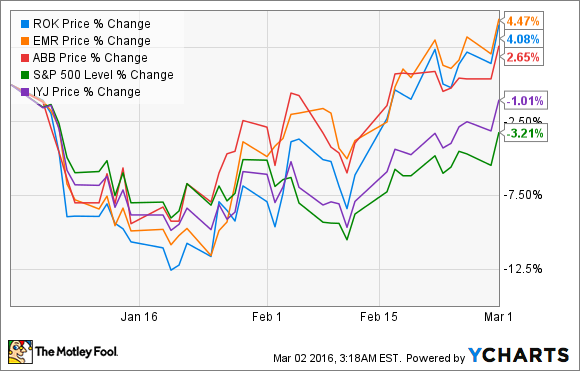 A tough start to 2016
The first-quarter results weren't pretty. As you can see below, the reported sales and earnings figures showed sharp declines in the higher-margin architecture and software segment, while productivity improvements helped offset revenue declines with control products and solutions. On the other hand, as you can see in the currency-adjusted (organic sales) figures, sales were heavily affected by the stronger U.S. dollar.

However, it was the guidance cut that initially upset investors:

Moreover, some of the commentary on the earnings call wasn't inspiring:

With all of this going on, what's to like about Rockwell Automation?

Valuation remains good
First, despite the guidance cut, Rockwell still has a compelling forward valuation. For example, if it hits the midpoints of its EPS and FCF conversion target ranges, as is expected, then its full-year enterprise value (market cap plus net debt) to FCF valuation will be around 17 times. That's not bad relative to its peers, and good if 2016 turns out to be a trough year. Moreover, it makes the stock a decent takeover candidate because a potential buyer -- such as, say, Honeywell International, ABB, or Emerson Electric (NYSE:EMR) -- could immediately boost its cash flow and return on invested capital. 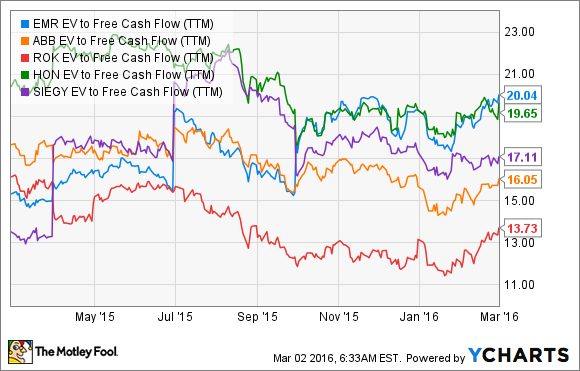 Honeywell is obviously on the acquisition trail, and Emerson Electric is restructuring its operations with future acquisitions a key focus.

IIoT still in play
Second, Rockwell's status as a backdoor way to play the Industrial Internet of Things (IIoT) is still in play. In a sense, the cyclical declines in revenue at Rockwell -- particularly in oil and gas and heavy industries -- are masking the underlying trend toward using things like IIoT. Nosbusch answered a question on this on the earnings call:

There is no question, and these are global discussions, customers understand that they need to continue to drive productivity and sustainability and their competitiveness ... So I think the secular story is absolutely in play -- if anything, I believe it's stronger today than a couple of years ago when we started on this journey.

Moreover, Emerson Electric is forecasting a return to order growth in April, with sales turning positive in the second half.

To be fair, Nosbusch outlined how Rockwell's outlook had worsened, saying they "no longer expect year-over-year growth later in the fiscal year," but this looks to be a case of the company previously being too optimistic on guidance. Incidentally, note that Emerson's fiscal year runs through December while Rockwell's runs through September. In other words, Rockwell may well see growth in the calendar year.

Finally, it's fascinating how the market is pricing in a recovery in the industrial supply companies -- seen as early cyclical stocks tied to U.S. manufacturing. 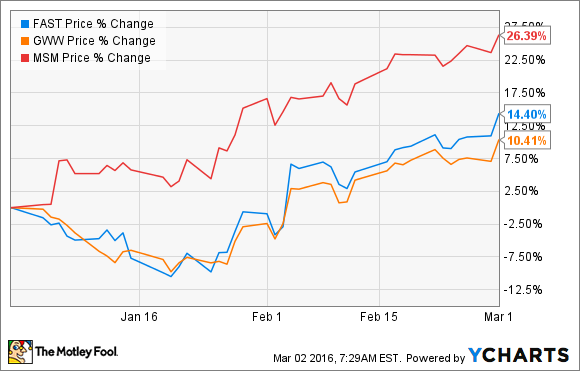 Time to buy Rockwell Automation?
The guidance cut was a disappointment, but Rockwell's valuation provided shareholders with some downside protection, and I believe the current valuation does too. Provided the economy doesn't turn downward -- China seems to be the main concern -- then Rockwell has the potential to outperform. Throw in some added fun with takeover potential and the stock is worth a position in the cyclical part of a portfolio.