What: Shares of Hawaii-focused airline company Hawaiian Holdings (HA -2.46%) have gone on a wild ride since the beginning of 2016. The stock lost more than 15% of its value in the first two weeks of the year, but regained all of that ground by the end of January, following a strong Q4 earnings report.

Hawaiian Holdings shares then accelerated last month, as investors continued to digest the company's strong 2016 outlook. The stock surged 22% during February, according to data provided by S&P Global Market Intelligence. 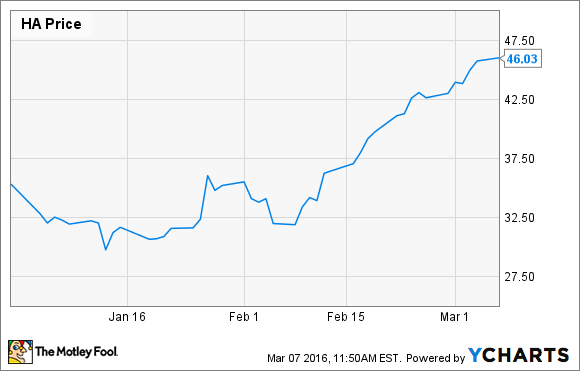 So what: Hawaiian Airlines is benefiting from rising demand for travel to Hawaii. At the same time, industry capacity growth on routes to Hawaii is cooling off after several years of rapid expansion, especially in the key West Coast-Hawaii market.

The stabilization of the Japanese yen is another positive. Since late 2012, the falling yen has been an almost constant source of unit revenue pressure for Hawaiian Airlines. With the yen starting to strengthen, this effect could reverse in 2016.

The net result is that Hawaiian Airlines is well-positioned to post industry-leading unit revenue growth this year. For Q1, the company expects unit revenue to be roughly flat year over year, whereas most airlines are projecting significant declines. The competitive capacity outlook for Q2 looks even better, giving Hawaiian a chance to deliver a solid unit revenue increase.

With oil prices starting to recover, it's more important than ever for airlines to get unit revenue growing in order to maintain their profitability. In that context, it's not surprising that investors are flocking to Hawaiian Holdings stock.

Now what: For Hawaiian Airlines to keep flying higher, it will need to follow through with solid unit revenue growth this year. In addition to watching the carrier's unit revenue performance, investors should also be on the lookout for any major moves by competitors to grow in Hawaii, as increased competition would tend to drive down fares.

Additionally, Hawaiian Airlines will start rolling out an updated cabin on its long-haul planes later this year, featuring lie-flat seats in first class. This move will reduce the seating capacity of its A330s by 16 seats each. It will be important to observe whether these lie-flat seats command enough of a premium to offset the lost revenue from having fewer coach seats available.