The cosmetics-maker's stock gained on a strong earnings report and a surprise resignation from its CEO.

What: Shares of cosmetics giant Revlon, (REV -1.92%) jumped 17.7% in February according to data from S&P Global Markets Intelligence as its sales recovered in its fourth-quarter report and the CEO stepped down. As you can see from the chart below, the majority of the gains came when the news was announced on Feb. 26. 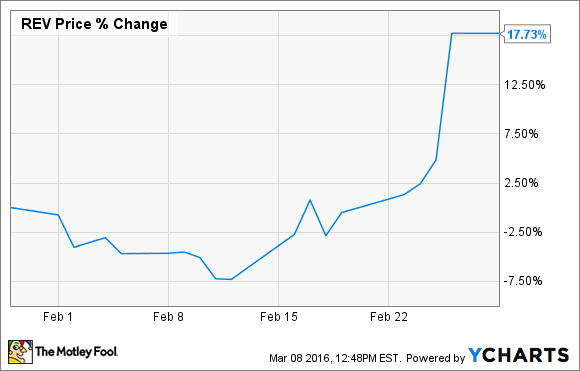 So what: The makeup-brand said sales rose for the first time in four quarters, increasing 4.2% on strong demand for its Revlon and SinfulColors product lines in the U.S. Adjusted earnings per share came in at $1.17 up from $0.10 a year earlier, however operating income fell 28% quarter to $54.9 million, primarily due to the effects of a strong dollar.

CEO Lorenzo Delpani called the fourth quarter "very successful for both our Consumer and Professional segments." He also noted that the company had reinvigorated key brands and increased profitability.

Separately, Delpani also announced his surprise resignation, saying he would step down by March 1 for personal reasons, but will remain on the board as an advisor. The decision comes a little more than a month after Chairman of the Ron Perelman, who owns a 77% stake in the company, said he would seek strategic options for the business as it loses ground to rivals including Sephora, Ulta, and Estee Lauder. Delpani said that the decision had "nothing to do" with Perelman's announcement.

Now what: Revlon has not yet named a successor or an interim CEO, and the company did not issue any guidance for 2016 in its recent earnings report. With the CEO chair now vacant, Perelman is likely to aggressively pursue strategic options, which is often understood to be a sale.

With the stock now up 50% since Perelman made the announcement, an acquisition may be less likely, but having already pursued a private takeover in 2009, it wouldn't be surprising for Perelman to propose another M&A deal.