Please ensure Javascript is enabled for purposes of website accessibility
Log In Help Join The Motley Fool
Free Article Join Over 1 Million Premium Members And Get More In-Depth Stock Guidance and Research
By Daniel B. Kline - Mar 10, 2016 at 9:02AM

The company took money aimed at luring new players making big investments, but it technically did nothing wrong.

Sometimes even well-intentioned moves have a way of turning out horribly wrong.

Like dressing up in a revealing outfit to surprise your significant other at the door only to find that he or she has brought the boss home for dinner. That might be a little more 1980s sitcom than what happened between Comcast (CMCSA 2.41%) and the state of Oregon, but it's pretty close.

In this case the Oregon state legislature created a tax break designed to encourage companies to make large, new investments in infrastructure for affordable, high-speed Internet access. It was clearly an attempt to attract Alphabet (GOOG -1.00%) (GOOGL -0.97%) with its Google Fiber product, but it went horribly wrong.

Here's what happened
When the state legislature passed what has become known as the gigabit tax break, it was intended to lure new investment, not reward existing players. Specifically, it was not intended to benefit Comcast, Rep. Phil Barnhart (D-Eugene), told Oregon Live. He pointed out that the cable and Internet giant's "Gigabit Pro" product uses "an existing network and charges extreme prices the Legislature never contemplated when they approved the tax breaks last year."

Giving those breaks to Comcast, which state utility commissioners unanimously voted 3-0 the company qualified for -- amounted to rewarding it for doing "nothing" Barnhart testified, the news website reported.

Like a squirrel finding a bird feeder, Comcast swooped in and legally took something it didn't earn and that wasn't meant for it. Instead of having the tax break attract new competition for the company -- which it still could -- it cost the state tens of millions and fattened the ISP's bottom line while doing nothing for the public.

It's a major mistake by the lawmakers, according to Barnhart, who admitted the error.

"The Legislature is not likely to be that foolish," he said. "We are foolish often, but usually not that foolish."

It's also worth noting that while the tax break was meant for companies delivering mass-market products, the Comcast service involved is certainly not that. Whereas Google charges $70 a month for gigabit Internet service, often waiving any installation fee, Comcast's product, Gigabit Pro, offers 2 gigabit service for $299.95 a month plus an installation charge of $1,000 or more.

So even though the law doesn't see it this way, it's not an apples-to-apples comparison. It's more apples to filet mignon. 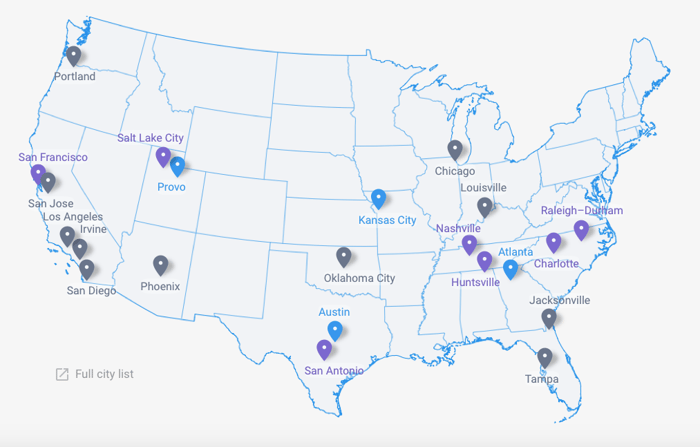 These are Google Fibers existing and prospective territories. Source: Google.

What happens next?
While it would take a change in the law to stop Comcast from receiving its undeserved and unintentional tax break, the utility commission did leave the door open for the type of increased competition the legislation was supposed to create.

The Oregon Public Utility Commission did confirm March 1 that potential services from Google FIber and Frontier Communications (FTR) would qualify for the tax break, according to Oregon Live. Under the law, companies are provided a property tax exemption if they offer most of their customers Internet service of 1 gigabit per second. Both Google Fiber and the perspective Frontier service would qualify and the law was more or less written specifically to attract Google, which has been considering parts of the state, specifically Portland.

Frontier has already announced plans for a 1 gigabit service product in Portland.

What happened here?
This is a case where Comcast can't win. If it passed up the tax break it was legally entitled to, then it might not be serving shareholders properly. On the other hand, taking public money for doing nothing could, and probably will, bring a public backlash.

Ultimately if Frontier and Alphabet enter the market to compete, then taking this tax break could hurt Comcast's already damaged reputation. The company should stave that off by using the tax break to provide discounts for people who can't afford the service or to add capacity in under-served areas.

Governments can do things with unintended consequences, but it this case, the business that benefits should try to find a way to make sure it doesn't look like it's taking money from the public till without providing anything in return.

Whether the law gets changed or not, Comcast needs to find a way to do the right thing and at least use this money to benefit the public. If it doesn't, then Google and Frontier will have another arrow in their quivers as they enter the market.