The healthcare staffing company missed estimates for its fourth quarter, but its turnaround continues.

What: Shares of Cross Country Healthcare (CCRN 3.65%), a national leader of primary healthcare staffing and workforce solutions, was down more than 15% in midday trading Thursday after the company reported disappointing fourth-quarter results after the bell Wednesday. In early trading Thursday morning, shares were down by nearly 25%.

So what: Cross Country Healthcare reported quarterly revenue of $193.1 million, which was a 3% year-over-year gain, but less than consensus estimates of $196.1 million. Further, the company reported a quarterly loss of $6.1 million  or $0.19 per share. Adjusting that figure for one-time items, earnings checked in at $0.18 per share, which was a penny short of consensus estimates.

Though, the company missed estimates, President and CEO William J. Grubbs said he remained optimistic about the grand scheme of the business.

"This was a year of significant improvement for Cross Country Healthcare. After only the second full year executing our turnaround plan, I am extremely pleased with the progress we are making," said Grubbs in a press release.

Now what: As the company continues to turn its business around, investors should focus on whether or not it meets its guidance in 2016. Looking at the first quarter expectations, management expects revenue to check in between $195 million to $198 million, a 5% to 6% increase compared to the prior year. It expects a jump in adjusted EBITDA margin of between 40 and 90 basis points, which would drive adjusted earnings to between $0.06 and $0.08 per share, a gain of between $0.03 and $0.05 per share. 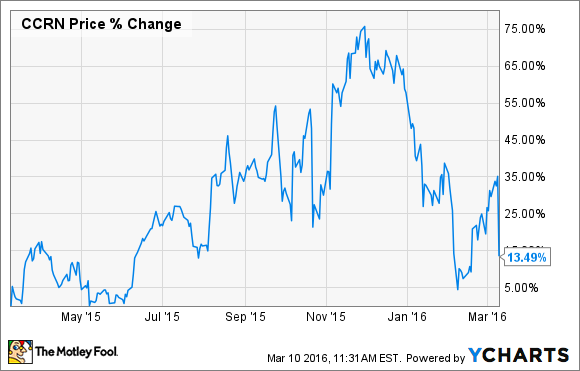 2016 will be a telling year for the company's business turnaround, and investors can expect more volatile swings in the company's stock price as the ride continues.