The mining machinery company soared after market-pleasing results and guidance. Is an industry recovery in the cards?

When a competitor's stock jumps 40% in a week, it's usually time to start looking at what's going on. Caterpillar's (CAT -1.47%) end markets include mining machinery, and Joy Global's (JOY) recent surge must have had investors thinking Caterpillar could follow suit in due course. So let's take a look Joy Global's results and what they mean to the investment thesis for Caterpillar stock. 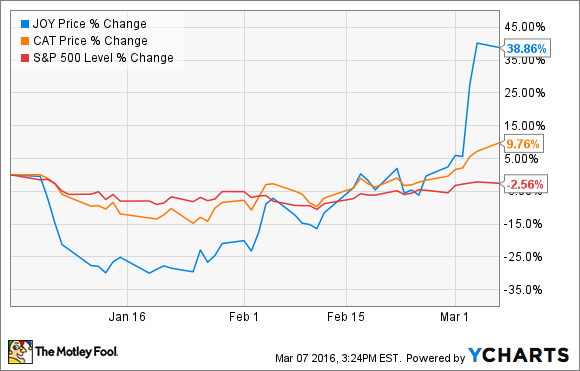 No guidance cut
Mining, coal, China, copper, global growth, U.S. coal production: It would be a struggle to put together a more potent list of end markets for investors to be negative about, and Joy Global is exposed to each one. Of course, all of this is no secret, and by the end of January more than 25% of shares in the company were being sold short.

Moreover, at the end of January, Caterpillar -- a company generating around 17.8% of its sales from resources industries -- released fourth-quarter results, stating, "We believe mining companies are continuing to curtail maintenance and rebuild activities." Surely Joy Global would be forced to cut guidance?

It seems not. Fast-forward to the first-quarter earnings release, and management's maintenance of full-year guidance -- despite disappointing results -- had short-sellers in a frightful panic. CEO Edward Doheny, on the conference call, said, "Our sales and earnings for the year are now tracking toward the middle of our previous guidance range of $2.4 billion to $2.6 billion and adjusted earnings per share of $0.10 to $0.50."

Is this a sign of stabilization in the mining machinery market?

Joy Global's sales guidance
To answer this question, let's take a closer look at guidance given on the earnings call. Robert Baird analyst Mircea Dobre asked a question on full-year 2016 sales, and Doheny replied that around $2 billion in service sales and around $500 million in original equipment sales would get to the $2.5 billion mark.

Doheny then explained how last year's revenue split was around "47% in the first half and 53% in the second half" and added: "As we're looking at that, roughly that midpoint feels about similar percentages as what we're looking at" for 2016.

It's not entirely clear if he's talking about just services (the analyst's question he was responding to was about services) or an overall shift in sales from 52% to 53% in the second half of last year to 54% to 55% this year. Conservatively, I've tabulated the sales Joy Global needs to generate in the second quarter to meet a range of expectations -- in line with Doherty's guidance.

In the table below, the first column represents assumptions for first-half sales divided by expected full-year sales -- so, for example, "45%" means 45% of the total-year revenue. The first row represents full-year sales guidance, and the figures encompass Doherty's guidance for $2.4 billion to $2.6 billion. First-quarter sales were $526 million, so the figures in the table represent what second-quarter sales would be based on guidance.

Given the "45%, 46% on the front half" comment, and the midpoint of full-year sales guidance of $2.5 billion, it's fair to assume that second-quarter sales could be around $612 million -- a figure ahead of the analyst consensus for around $609 million, and a surprising one given deteriorating conditions particularly in the U.S. coal market. The stock market was pleased.

Joy Global benefiting for stock-specific reasons
That said, the evidence suggests the "good news" is more about Joy Global than the market. Management certainly didn't say conditions were improving in the key U.S. coal market or in China. On a more positive note, according to Doheny, Australia is "starting to stabilize," South Africa is "fairly stable," and India has a growth opportunity -- there are at least some signs of hope.

However, Joy Global looks set to benefit in the second half mainly for stock-specific reasons:

In short, Joy Global's key U.S. coal market remains in structural decline, and China isn't getting any better, but the company is dealing with the downturn better than previously expected.

Two key conclusions for Caterpillar investors
First, it's hard to expect any kind of end market turnaround in Caterpillar's resource industries sales as a consequence of Joy Global's report. The positive news on guidance -- which, of course, is only an estimate -- is more about Joy Global's execution than any positive view on end markets.

Second, it may not matter. Although Caterpillar has significant sales to the mining industry, its key end market is energy and to a lesser extent transportation and construction -- a market also affected by low oil prices, as it reduces energy-related construction activity. However, what Joy Global results do prove is that companies in beaten-up industries can see their stock price soar merely by reiterating guidance. Caterpillar shorters, take note.