Please ensure Javascript is enabled for purposes of website accessibility
Log In Help Join The Motley Fool
Free Article Join Over 1 Million Premium Members And Get More In-Depth Stock Guidance and Research
By Daniel B. Kline - Mar 12, 2016 at 10:25AM

The company reported some positive earnings and has made progress on a number of fronts.

Strong Q4, 2015 sales pushed The Chefs' Warehouse (NASDAQ: CHEF) shares to huge gains in February. After closing out January at $13.15, the stock began a steady climb up after its Feb. 18 earnings report ending the month at $18.87, a 43.5% gain according to data provided by S&P Global Market Intelligence. 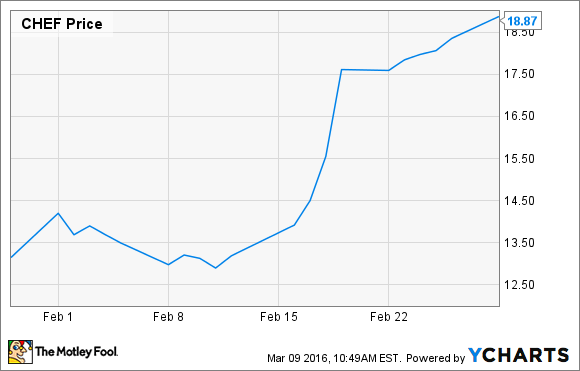 "2015 was a momentum building year for the company as we continue to create the industry-leading, dynamic, food marketing and distribution company we envisioned when we went public four years ago," said CEO Chris Pappas in the earnings release.

So what: Chefs' Warehouse clearly turned a corner in 2015, which was its first year in which total revenues exceeded $1 billion. Going forward, the company's biggest challenge is integrating companies it has purchased while smartly growing capacity.

In the earnings release, Pappas noted that the company completed its acquisition of Del Monte,  a supplier of high-quality, USDA inspected beef, pork, lamb, veal, poultry, and seafood products to Northern California and is making significant progress on integrating that business. In addition, the CEO said the company "opened a new market for our specialty division with the addition of a distribution facility in Chicago, as well as added significant additional capacity in New York, Las Vegas and plan to open our San Francisco facility by the end of this month."

Now what: Going forward, the challenge for Chefs' Warehouse is maintaining its positive momentum. Pappas doesn't believe that will be a problem.

"2016 is shaping up to be a great year for the Company as we carry forward this momentum and build on our success.," he said. "We have many of our large capital-intensive projects behind us, many new state-of-the art facilities in operation and our core specialty and protein businesses are performing very well."

That's true, but moving from rapid growth and expansion to a more measured pace can sometimes be difficult for a company. In this case, there remains room for expansion, but the near term will be focused on taking advantage of the moves it has already made. That likely won't lead to this kind of share growth, but it could justify the big gains made in February.