BorgWarner is a specialist in the auto industry that creates some unique risks at this industrial player.

BorgWarner (BWA 1.43%) is an industrial company, which means its fortunes will wax and wane with the economy. But you can't just lump this company in with industrials such as broadly diversified Honeywell (HON -0.58%). That's because BorgWarner is a specialist, and that exposes it to a different set of problems; here's an idea of how risky BorgWarner stock is.

A worldly fellow
When you look at companies like BorgWarner and Honeywell, there are clearly some similarities. For example, both operate on a global scale. That means you'll need to keep track of more than just U.S. economic trends if you're interested in owning this pair, since a slowdown in any part of the world could lead to revenue headwinds. This is actually a big issue for BorgWarner, since it generates more than 70% of its revenues from outside the United States. Honeywell, by comparison, gets a little more than half its revenue domestically.

Which also brings up the issue of currency fluctuations. That's a mixed bag, however. Right now a strong dollar has been crimping the results of international companies. For example, in the third quarter of 2015, BorgWarner's revenues fell 7%, but if you exclude the impact of currencies sales would have been up 3%. So this is a risk you'll want to pay attention to right now. But it could flip around if the dollar weakens and foreign currencies get translated in more dollars, which boosts results. So this one isn't all bad, but you need to recognize that the pleasure and pain will tend to move in cycles.

Ultimately, you'll want to keep an eye on what's going on when you pull out currency impacts. This can provide a clearer picture of underlying performance. That said, investors might react to the GAAP numbers, which could increase share price volatility over short periods of time. But that could be a buying opportunity if you keep your head and focus on the business.

A big difference
So far the risks here would affect BorgWarner and Honeywell in the same way. But there's a vital difference between the two companies. Honeywell's products span a vast array of industries and end markets, including specialty chemicals, industrial controls, aviation, and automobiles. BorgWarner is pretty much focused on the auto sector. It makes high-tech turbo chargers and other emissions controlling and power enhancing equipment for cars.

It's good at what it does, but this is pretty much all it does. So as you look at BorgWarner you need to keep in mind that it's really a one-trick pony. If the entire world is doing well, but autos are struggling, BorgWarner will likely be struggling, too. That will be true even if diversified industrial players are reporting solid results; this is what happens when you put all of your eggs in one basket. In this way, BorgWarner is more like a Cummins (CMI 0.37%), which makes diesel engines for everything from consumer autos to heavy-duty trucks to the power industry. (Interestingly enough, Cummins is a key competitor to BorgWarner is the Turbrocharger space.) In both cases, global growth is important, but demand for a specific product will have a larger impact.

And the impact can be pretty big. Although Cummins' sales were roughly flat year over year in 2015, it's calling for a top-line decline of as much as 9% in 2016. Clearly being focused can quickly turn into a problem if your niche starts to slow down. Although that doesn't appear to be the case for BorgWarner today since it's expecting a top-line uptick this year, Cummins is clear evidence that you shouldn't overlook this risk. For example, if a U.S. automaker or two were hit with a union strike, BorgWarner sales would get hit and there's nothing it could about it.

Staying ahead of the game
That brings up another important risk to watch: research and development. BorgWarner has a solid position in its industry because the equipment it makes helps its customers meet increasingly stringent emissions control and auto mileage regulations. The operative word here is "increasingly." BorgWarner needs to ensure that what it sells keeps up with changing rules and that means spending heavily on research and development. If it doesn't stay at the leading edge, or falls behind competitors, it could end up losing market share. In fact, it's got some pretty large competitors, including Honeywell, Bosch, Mitsubishi Heavy Industries, and American Axle, among many others around the world.

Complicating this is that automakers are notoriously cheap, pushing suppliers hard to save every penny possible. So BorgWarner has to balance the need to compete on price in a highly competitive industry against the need to stay ahead of the pack, in terms of technology. It's navigated this course reasonably well, but its a fine line and a notable risk. It's worth noting that while most of its products are tied to dirty old gasoline, it isn't ignorant of the changing auto landscape, as it also provides products for electric vehicles. 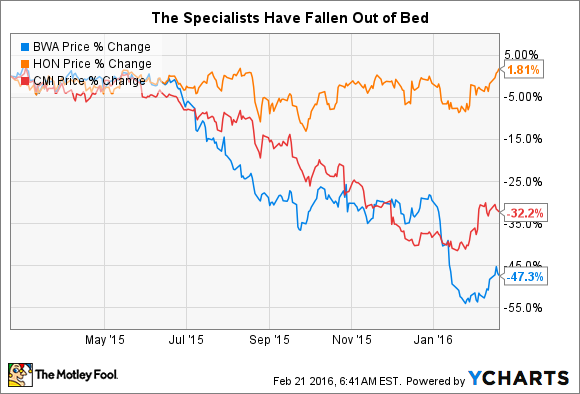 Worth the risks?
If you are a conservative investor, the risks associated with buying an industrial specialist might not be right for you. For example, diversified Honeywell has seen its stock basically tread water over the past year, while specialists BorgWarner and Cummins have watched their shares plunge in comparison.

That said, for more aggressive investors, that could be an opportunity to jump aboard companies that are quite good at what they do. However, that doesn't change any of the risks involved with owning a company like BorgWarner. You'll still need to watch the global economy, the auto sector, and BorgWarner's successes and failures at remaining a leading auto industry supplier. So, in the end, BorgWarner may be a good company, but investing here comes with ample risk.