Please ensure Javascript is enabled for purposes of website accessibility
Log In Help Join The Motley Fool
Free Article Join Over 1 Million Premium Members And Get More In-Depth Stock Guidance and Research
By Adam Galas - Mar 15, 2016 at 11:15AM

Find out just how badly America's largest frack sand MLP did in 2015, why 2016 may be no better, and what all this means for long-term income investors. 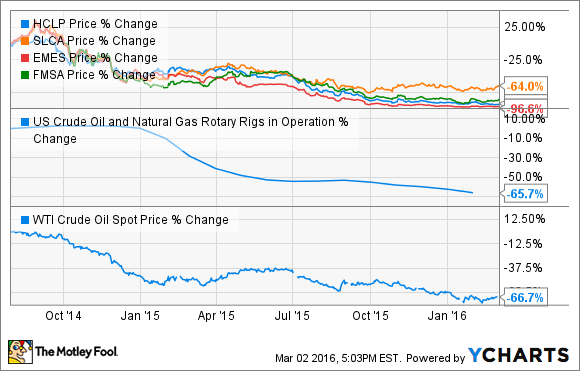 With no clear end in sight to low energy prices and rig counts down 67% since their 2014 highs (and continuing to decline), let's take a look at Hi-Crush's 2015 earnings to see just how much damage was done to its underlying growth thesis; what the biggest threats to Hi-Crush Partners are in 2016; and whether or not it's worth buying at today's deeply depressed levels.

About the only good thing about 2015 was that Hi-Crush Partners was able to sell more sand than last year. That was a result of two factors, rising sand intensity per well from oil and gas producers, and its efforts in the first three quarters of 2015 to win market share from higher priced competitors.

However, with its contribution margin per ton collapsing 31% in the fourth quarter of 2015, to just $9.66 per ton, investors need to be prepared for the MLP's Adjusted EBITDA, DCF, and profitability in 2016 to decline even further.

Management has made heroic efforts to support margins via massive cost reductions, painful layoffs, and shutting down its least profitable facilities. For example, in just the last six months it slashed its workforce by 23% and idled its Augusta mine and supporting facilities.

One potential piece of good news is that Hi-Crush and many of its customers don't expect sand prices to fall much further, and CEO Robert Rasmus told analysts at the quarterly conference call that Hi-Crush is "unwilling to take orders that aren't profitable."

While that may limit the amount of new market share the MLP can win from more desperate competitors who are willing to sell sand at below cost, it also means that Hi-Crush is more likely to hit its amended debt covenants.

While its amended credit agreement does entitle it to distribute as much as 50% of quarterly DCF (minus principal debt payments) management is choosing to be conservative and maintain maximum financial flexibility given the large uncertainty regarding the potential timing and magnitude of a recovery in energy prices.

This is an appropriate decision considering that its long-term debt increased 27% in 2015, making the MLP more dependent than ever on remaining within its creditor's good graces.

As you can see for the next five quarters Hi-Crush has an increasingly large minimum EBITDA target it must hit to remain in compliance with its new debt agreement. With contribution margin per ton likely to be lower this year than last, and sand volume potentially threatened by the ongoing decline in rig counts, Hi-Crush is far from guaranteed to hit those EBITDA minimums.

Of course the biggest risk to Hi-Crush Partners is energy prices remaining low, or even falling further, and failing to recover sufficiently by early 2017 to reignite demand for frack sand. For example, management says that the declines in sales volumes witnessed in Q4 have continued into Q1 and it anticipates that will continue as long as decreased drilling and fracking activity continues.

This is a risk mirrored by US Silica, who says analysts and customers have told it that rig counts could potentially decline another 30% to 35% in 2016, should energy prices fail to rise.

Hi-Crush competitor Emerge Energy Services remains equally bearish on the short-term forecast for frack sand demand. Emerge Energy just told analysts that it expects no recovery in oil prices and thus frack sand until the end of 2016 at the earliest, but more likely mid 2017.

Meanwhile, according to the final member of the publicly traded frack sand big four, Fairmount Santrol, pricing pressure is especially bad in the Marcellus and Utica shale, areas in which Hi-Crush is one of the largest sand providers. This means that investors shouldn't expect America's largest and most prolific gas producing region to provide much margin relief this year.

Bottom line
When it comes to energy stocks that stand to potentially benefit immensely from an inevitable recovery in energy prices frack sand producers such as Hi-Crush Partners mightfit the bill for higher-risk investors.

However, investors need to understand that due to Hi-Crush's MLP business model, which has resulted in a much more leveraged balance sheet than c-Corp competitors such as US Silica, it remains a speculative investment. Should low energy prices persist into 2017 or beyond, Hi-Crush's very survival might come down to its creditors' willingness to once again renegotiate its debt agreements.