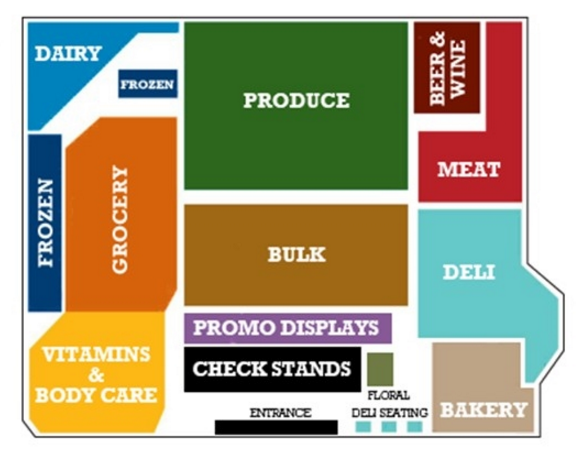 So what: The majority of Sprouts' gains during the month came after the release of fourth-quarter 2015 earnings on Feb. 25. The company revealed a sales increase of nearly 27% to $930.3 million. It should be noted that the results benefited from a slightly longer measurement period of 14 weeks, versus the 13 weeks that comprised the fourth quarter of 2014. On a comparable 13-week basis, sales still advanced markedly, by 17%.

Net income rose 59% to $28.2 million, and diluted earnings per share similarly showed substantial improvement of more than two-thirds, to $0.18. This gain was a function of the sales expansion, as well as higher gross margins, which management attributed to the extra week in the quarter, lower utility costs, and food deflation (i.e., lower costs in food products, the benefit of which weren't passed on to customers).

The grocer's most promising metric, however, was an increase in comparable-store sales of 7.4%. The company's comparables trend had appeared to be flattening as of late, as Sprouts reported comps in the first three quarters of this year that averaged just 5.2%.

Now what: Sprouts' management discussed three "distinct areas of priority" in the company's fourth-quarter 2015 earnings conference call: sales growth, investment in the company's infrastructure, and investments in employees. Many of the specific plans of these first two broad goals are similar to ideas that larger competitor Whole Foods Market (WFM) has been testing in the marketplace, with some initial success.

For example, with regard to its sales growth push, CEO Amin Maredia revealed that Sprouts will place an emphasis on prepared foods in 2016. A successful experiment last year with expanded deli offerings, which added prepared salads and meals, specialty coffee, and fresh juices to a typical Sprouts deli case, will become standard in 70% of new stores going forward.

This mirrors a strategy put in place by Whole Foods to increase the variety and availability of prepared foods in its stores this year, due to their popularity as well as higher margins. Both companies will benefit from the market differentiation this emphasis provides, as prepared foods draw customers into stores and help offset price concessions on packaged goods in the aisle, where much competition in the natural and organic foods sector is focused.

Maredia also discussed another tactic Sprouts will use to weather competition while boosting sales: expanding private-label items. The CEO disclosed that Sprouts' private-label brands grew by 30% last year, and now make up 9% of annual sales. Again, this is quite similar to one of Whole Foods' recent initiatives. In fact, Whole Foods' upcoming smaller concept stores will provide a new venue in which to market and grow its in-house, "365" private-label brand.

Finally, in upgrading its "infrastructure," Sprouts has indicated that it will increase digital engagement with customers in 2016. Management intends to provide an update on these plans to investors later this year. This is an area that Whole Foods has successfully plumbed recently. After months of testing, Sprouts' larger competitor launched digital coupons on its mobile app several weeks ago, and it's well on its way toward a fully developed digital customer loyalty program.

That Whole Foods and Sprouts are employing similar tactics may speak to the wisdom of their current ideas on how to protect and scale up market share. Whole Foods appears to be slowly wending its way out of a comps slump. Using similar tools, Sprouts, a younger company with perhaps more growth potential, is trying to ensure that it hits its oft-repeated long-term goal of 14% unit growth in 2016.