Please ensure Javascript is enabled for purposes of website accessibility
Log In Help Join The Motley Fool
Free Article Join Over 1 Million Premium Members And Get More In-Depth Stock Guidance and Research
By Daniel B. Kline - Mar 16, 2016 at 10:25AM

The companies are both trying to sell stuff, but one may have built an insurmountable lead.

eBay (EBAY -2.34%) and Amazon.com (AMZN -2.49%) compete for retail customers in the same way that, technically, the New York Knicks and Golden State Warriors both compete for the National Basketball Association's title.

Yes, they're in the same league, and the Knicks might even win a game every now and then when the two teams meet, but when it comes to winning a championship, only the Warriors are true contenders. Of course, over time that can change. If the Knicks make some smart draft picks or lure in the right free agents, they could move from pretenders to contenders.

The same is true in the retail world, where Amazon is the undisputed title holder and eBay is in comparison barely a playoff contender. Still, just being in the game gives you a chance to win, and eBay, although it has a lot of catching up to do, is at least worth looking at.

The case for eBay
Unlike the NBA, where there are clear winners and losers, the stock market can reward improvement, potential, and growth. That makes it possible for eBay stock to be a better buy than Amazon's, even though the two companies aren't comparable when it comes to sales.

eBay has struggled over the past 12 months. In that time the company spun off its PayPal brand, a move that has left it reliant on its core online auction and retail sales business. That business struggled to grow in 2015, according to the company's most recent earnings release.

On the plus side, in 2015 the company's commerce platform added 8 million users globally, but gross merchandise volume of $82 billion was actually "down 1% on an as-reported basis, reflecting the impact of a strong U.S. dollar," according to the company. The numbers were by no means disastrous, but they show a company that has no clear path to putting up big growth numbers.

Basically, if you believe eBay can leverage its user base to increase sales, then its stock sits at a bargain price. But if you think the company has stagnated or plateaued, then its shares offer false value.

The case for Amazon
The argument against Amazon has always been that the company spends too much compared to its razor-thin profit margins. That might be true, but for investors, those investments should pay off in the long run.

Amazon has built a delivery infrastructure that gives it an advantage over even the biggest physical retailers. It also has multiple platforms -- Kindle, Kindle Fire, Fire TV, and even Echo -- that it can leverage for future growth.

At times, the company's stock has been punished for the capital investment required to build up these advantages, but in 2015 it became quite clear that this was money well spent. Amazon saw a net sales increase of 20% in 2015 to $107 billion and raised is operating income for the year to $2.2 billion, compared with $178 million in 2014.

"Twenty years ago, I was driving the packages to the post office myself and hoping we might one day afford a forklift. This year, we pass $100 billion in annual sales and serve 300 million customers," said CEO Jeff Bezos in the company's Q4 earnings release. "And still, measured by the dynamism we see everywhere in the marketplace and by the ever-expanding opportunities we see to invent on behalf of customers, it feels every bit like Day 1."

Amazon is big, and it's getting bigger, because the money it's invested has created an amazingly high barrier to entry for any competitors. eBay, or any other online or brick-and-mortar retailer would need years as well as billions of dollars to even come close. 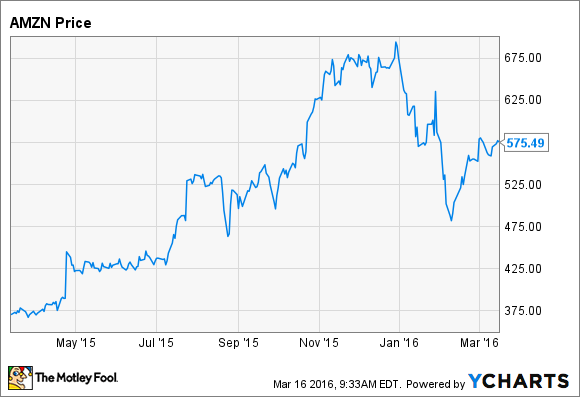 Amazon is a better buy
While eBay has strong potential to solidify its business and even grow it, it simply doesn't have the long-term potential Amazon does. The online retail leader has built a core business in its commerce operation, which is set to dominate for years to come. In addition, the company has a meaningful share of the tablet and set-top-box market, along with total dominance in e-readers. Perhaps most importantly it has Echo, an emerging product line that could pit Amazon as one of the companies controlling home automation.

Amazon also has its cloud business, Amazon Web Services, which did nearly $2.5 billion in the fourth quarter of 2015, according to GeekWire. That was 69% growth year-over-year, which suggests that the company has massive upside in the division.

And, in addition to its growing cloud business, its retail sales, and its electronic gizmos, Amazon also taken steps to further evolve its shipping business. The company has leased a fleet of 20 airplanes which will "provide critical capacity expansion to support the growth of Prime in the U.S." spokeswoman Kelly Cheeseman told USA Today. Ultimately, that will give the retailer more control over its shipping costs as well as more flexibility. It's simply another move which shows it's not playing the same game as its auction-based rival.

eBay has the potential to be a solid, albeit boring, retail platform with a lock on the online auction niche. That's a nice business, but it lacks the growth potential of Amazon, which should continue its retail dominance while bringing its user base to new, lucrative platforms.

Amazon stock won't be an arrow always pointing up. Bezos isn't afraid to report bad quarters resulting from capital or long-term investments. But if you look at growth and which company has a higher ceiling, Amazon is simply a better buy than eBay.