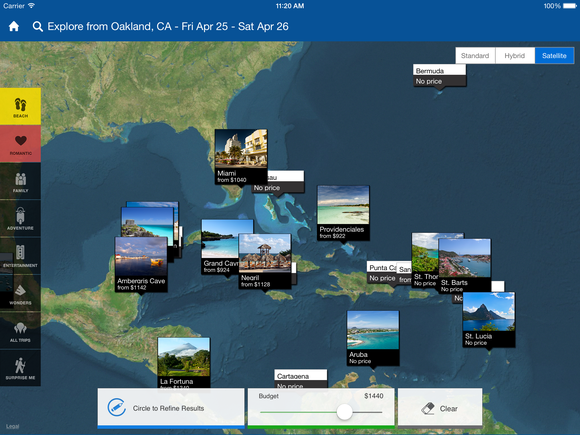 Priceline (BKNG 0.70%) is the market leader among online travel agencies on a global scale, and the company has delivered truly spectacular returns for investors over the long term. Priceline stock was trading around $24.5 per share 10 years ago, and it's now in the neighborhood of $1,340 per share. This represents a staggering gain of nearly 5,400% for investors who were smart enough to hold on to Priceline over the last decade.

Even better, when considering aspects such as its market leadership in a promising growth industry, rock-solid financial performance, and attractive valuation, Priceline stock looks well positioned to continue delivering market-beating returns in the years ahead.

A top-quality business
Internet, mobile computing, and related technologies are having a huge impact across different industries, and the travel business is no exception at all. Customers across the world are increasingly going online for their hotel reservations, plane tickets, and car rentals, and this represents a huge opportunity for Priceline.

Priceline and Expedia (EXPE 0.95%) are the two main players in online travel services. While Expedia is strongly positioned in the U.S., Priceline is the undisputed industry leader on a global scale. Priceline is expected to produce $10.7 billion in revenue during 2016, and Wall Street analysts are, on average, forecasting $8.9 billion in sales from Expedia during the same year. The difference in revenue size is not too big, but Priceline produced 89% of its gross bookings in international markets last quarter, while Expedia made only 35% of its bookings outside the U.S.

International presence can be a source of volatility for investors in Priceline, since foreign currency fluctuations can have a considerable impact on the company's sales and earnings when translated to U.S. dollars. Nevertheless, the online travel industry is offering exceptional opportunities for growth in emerging markets, where industry penetration levels are still much lower than in developed countries. Besides, Europe is a major destination for travelers from all over the world, so Priceline's leadership in this key market is a crucial strategic advantage for the company in the long term.

Rock-solid financial performance
Since Priceline generates most of its business overseas, the company has been hurt by foreign currency depreciation lately. However, Priceline is proving to investors that the business is strong enough to continue producing encouraging performance under difficult economic conditions, and this says a lot about the company and its management team.

Priceline produced $12 billion in gross travel bookings during the fourth quarter of 2015, a year-over-year increase of 13% in U.S. dollars, and a much stronger jump of 24% in constant currency terms. Total gross profit grew 12% in dollars and 23% in constant currency, and the company booked 99 million room nights during the quarter, an increase of 27% from the same quarter in 2014. The business model is spectacularly profitable, and Priceline retained over 35% of sales as operating profit during the full year 2015.

The company is also attracting more hotels to its platforms, and this makes the service more valuable to customers, as they benefit from more choices and conveniently priced deals. Priceline's main platform, Booking.com, added 220,00 properties during 2015, and it offers more than 850,000 hotels and other accommodations in over 220 countries. There are now more than 22.6 million rooms potentially available to Priceline customers across the company's platforms in different markets -- quite an impressive scale for a relatively young business such as Priceline.

Attractive valuation
Even the best companies can be lousy investment ideas if the stock is too expensive, but that's hardly the case when it comes to Priceline. Far from that, Priceline trades at a forward price to earnings -- P/E -- ratio around 16.4 times earnings forecasts for the coming year. As a reference, competitor Expedia is trading at a forward P/E ratio of 17.1, and the average company in the S&P 500 carries a forward P/E ratio around 16.8.

Considering that Priceline is a market leader in the very promising online travel industry, and that financial performance remains impressive, even under challenging economic conditions, current valuation is more than reasonable for such a top-quality business. As long as management keeps leading the company in the right direction, Priceline stock still offers considerable upside potential from current price levels.