Please ensure Javascript is enabled for purposes of website accessibility
Log In Help Join The Motley Fool
Free Article Join Over 1 Million Premium Members And Get More In-Depth Stock Guidance and Research
By Adam Levine-Weinberg – Mar 22, 2016 at 8:15AM

Unit revenue trends at JetBlue and Virgin America are likely to improve in the next few quarters, driving a recovery in these two beaten-down airline stocks.

For much of 2015, chic low-cost airlines JetBlue Airways (JBLU -3.88%) and Virgin America (VA) were posting the best unit revenue performances in the U.S. airline industry. More recently, unit revenue has faltered at both carriers.

As a result, their stocks have suffered. JetBlue stock has lost a quarter of its value in the past six months, while Virgin America stock has declined by 17%. By contrast, a broad index of airline stocks has risen fractionally during that time period. 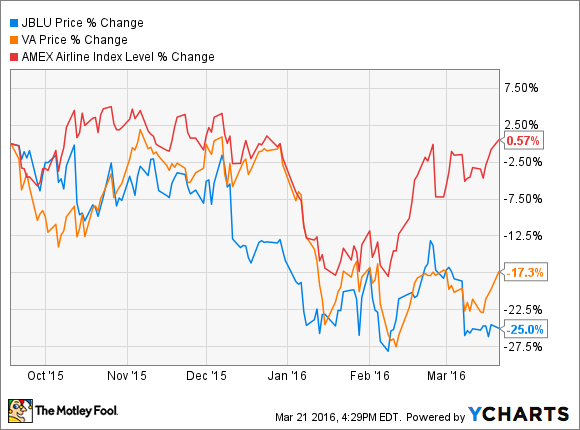 Fortunately, unit revenue is likely to recover soon for both JetBlue and Virgin America. That should drive better results for shareholders, too.

Against the backdrop of this growth a year ago, JetBlue expects to report a 7%-8% year over year decline in revenue per available seat mile for Q1. Virgin America is likely to report a more modest low-mid single-digit unit revenue decline.

Competitive trends are improving on transcontinental routes
A second key unit revenue growth driver could kick in as soon as Q2. Industry capacity on the transcontinental routes from New York to San Francisco and Los Angeles was on the rise for much of 2015. These routes are important for both JetBlue and Virgin America, especially the latter.

However, United Continental decided to slash its transcon capacity as of October. It pulled out of the JFK Airport market entirely, which is significant because that is JetBlue's main base and Virgin America's most important New York-area airport.

This reduction in competition has already started to improve pricing for transcon flights. But year-over-year capacity trends have actually been fairly stable in the past few months, as other airlines -- including JetBlue and Virgin America -- have "backfilled" the capacity cut by United.

However, starting next quarter, capacity is likely to be down on a year-over-year basis in the JFK-San Francisco and JFK-Los Angeles markets. This change in capacity trends bodes well for unit revenue improvements there.

Self-help is important as well
Of course, JetBlue and Virgin America are doing more to bolster unit revenue than just waiting around for year-over-year comparisons and competitive capacity trends to get easier.

For example, JetBlue launched a new rewards credit card earlier this month. The company expects this new card to boost its annual operating income by about $60 million compared to its previous credit card deal.

JetBlue is also expanding its highly acclaimed Mint premium service to Boston starting later this week. The ramp-up of Mint service on the JFK-San Francisco and JFK-Los Angeles routes in the second half of 2014 led to better than 20% unit revenue growth on those routes in Q1 2015. Mint routes remain a small part of JetBlue's network, but they can thus have an outsized impact on companywide unit revenue.

Meanwhile, Virgin America has recently deployed new ancillary product bundles and new IT capabilities that should drive steady growth in ancillary revenue this year. Virgin America also started taking delivery of new aircraft capable of flying to Hawaii, which allowed it to begin serving that lucrative market in late 2015 (with more growth planned for 2016).

More broadly, JetBlue and Virgin America are both shifting capacity around in different markets based on supply and demand trends. This is standard practice in the airline industry, but it's still an important tool for them to react to the fare pressure they have seen in some of their markets.

Looking for steady improvement
The airline industry is notoriously volatile, but JetBlue and Virgin America both have some meaningful unit revenue tailwinds that will kick in over the next few quarters. Once they get unit revenue moving in the right direction, their share prices are likely to follow.