Why are both social media giants interested in streaming live TV?

Facebook (META 1.98%) and Twitter (TWTR) are both trying to claim the rights to stream live TV from various networks, according to a recent New York Post report. The two social media companies have both reportedly held talks with multiple TV executives to create "bundles" of live channels.

Facebook has been talking to the NFL to offer access to its Thursday Night Football package to users across its network. The Post didn't mention if Twitter was holding similar talks with the football league, but it's certainly a possibility considering how often its platform is used during sporting events.

It's unclear how either network will actually deliver the streaming content, but the networks are reportedly weighing the pros and cons of partnering with the social networks. On one hand, streaming content to Facebook and Twitter could help networks reach younger users and access viewers' social data. But on the other hand, networks might lose revenue from advertisers who prefer traditional TV ads. Let's take a look at why Facebook and Twitter are interested in streaming live TV, and which company would have the upper hand when push comes to shove.

Expanding into Netflix's untapped markets
Netflix (NFLX 3.74%) is the dominant name in video streaming, but two markets which it hasn't entered are live TV and sports. The problem is that instead of displaying ads, Netflix pays content providers royalties to stream ad-free shows and movies. Netflix CEO Reed Hastings has repeatedly stated that his company won't ever splice commercials into its content -- which led to an impasse regarding live streams of regular TV programs.

At the same time, streaming content obligations (which Netflix promises to pay studios to license future titles) are still the company's top expense, rising 15% annually to $10.9 billion last quarter. To reduce that bill, Netflix produces original shows and movies. Since contracts for broadcasting live sports have surged over the past few years, Netflix content chief Ted Sarandos declared last December that the company would only stream live sports broadcasts if it created and owned the content itself. 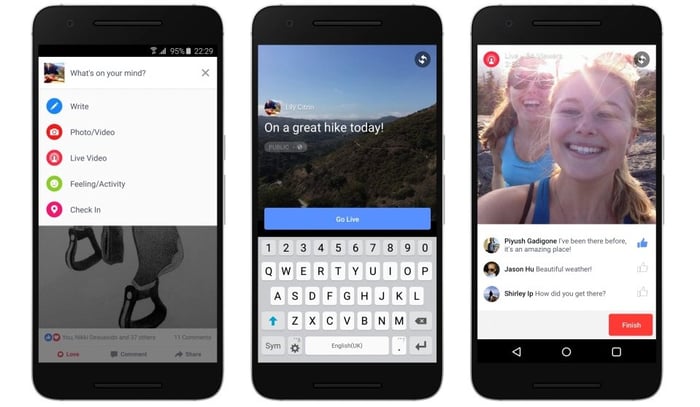 Several networks, like E!, have already started using Facebook Live to shoot and stream live shows directly from smartphones -- an innovative approach which enables hosts to answer viewer questions in real time. If TV networks agree to stream their content onto Facebook Live or Periscope in a similar fashion, they could monitor live comments to better understand their viewers.

Facebook and Twitter users often post status updates while watching live shows and sporting events. Both companies accumulate those messages in big treasure troves of data which networks and advertisers can potentially mine. However, that data might be more useful when paired with live content instead of pre-recorded TV shows. That's probably why Facebook declared in a statement that it wasn't "focused on acquiring the rights to conventional TV programs" like The Walking Dead or Game of Thrones.

Which social network will rule live TV?
Not much else is known about Facebook and Twitter's TV ambitions, but if push comes to shove, Facebook will definitely have the upper hand for three simple reasons. First, its user base of 1.6 billion monthly active users is nearly five times larger than Twitter's. Second, Facebook has been aggressively expanding its video ecosystem with hosted videos, live videos, and video ads. In January, it reported that 500 million people watched Facebook videos every day. As of last year, Twitter's Periscope had just 10 million active users, while 100 million people were watching its Vine videos monthly.

Lastly, connecting with Facebook can help TV networks compare viewer statistics with social profiles with bulk analytics. Since Facebook profiles contain much more information than Twitter's, Facebook can leverage its users' data as the ultimate bargaining chip with TV networks.

The video war is just beginning ...
Over the past year, Facebook has turned up the heat on YouTube with its video expansion, targeted Periscope with Facebook Live, and attacked Twitter's domination of live sports coverage with Sports Stadium.

By working with TV networks, Facebook might carve out a niche market in streaming video which Netflix has failed to touch. If Facebook can work with those networks to create compelling bundles of live programs, it could generate a whole new stream of video-based revenue.

Leo Sun has no position in any stocks mentioned. The Motley Fool owns shares of and recommends Facebook, Netflix, and Twitter. We Fools may not all hold the same opinions, but we all believe that considering a diverse range of insights makes us better investors. The Motley Fool has a disclosure policy.