The stock could be a dividend trap.

The best way to understand Stage Stores (SSI) may be to look at the stock's recent performance. 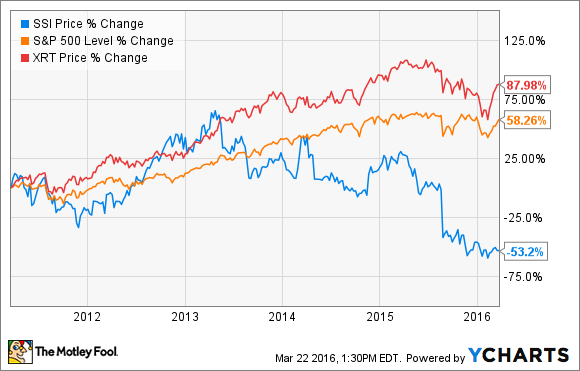 Over the last five years, shares have fallen 53%, while the broad-market S&P 500 has gained 58% and the SPDR S&P Retail ETF has jumped 88%. The disparity only increases when shortening the window to 2013. In other words, the current picture for Stage Stores stock is not a pretty one. The stock sits at a five-year low, and the company has badly missed earnings estimates in its last three quarters. What gives?

The company seems to have the misfortune of operating in a struggling industry -- department store retail -- and owns stores in oil-rich parts of the country that have been affected by the slide in oil prices. In its recent earnings report, CEO Michael Glazer said, "Our holiday results were pressured by low oil prices, the devalued peso and record warm temperatures. Stores in the oil patch and along the Mexican border account for more than 40% of our sales, and the economic uncertainty in those areas negatively affected our comp sales by 240 basis points during the fourth quarter."

The Houston-based company is particularly vulnerable to oil sector weakness, as comparable sales fell 3.4% in the quarter and 2% in the year, leading to substantial declines in profit. For the year, free cash flow was also -$50 million, another warning sign as the company invests in its e-commerce platform and improving store appearance.

Like many of its rivals, the company plans to close  stores. Over the summer, Stage said it would shutter 90 of its 832 stores and plans to close 30 stores this year, while opening none. It forecast a decline in comparable sales of -3% to -1% for the current year and flat profit growth.

So how safe is it?
The best reason for investing in Stage is probably its 7% dividend yield, a product of management's aggressive capital return policy, which also included repurchasing $41.2 million in stock, or approximately 20% of the company's market cap in the fourth quarter. While such a move will boost the company's per-share earnings, the business is not generating the cash flow necessary to pay for such a buyback, nor can it sustain the 7% dividend payout purely out of cash flow at its current profitability level.

If its performance continues to decline, the dividend could get cut or scrapped altogether, making Stage stock especially risky. With a track record of missed earnings estimates and declining comparable sales, and its correlation with oil prices, the stock cannot be considered safe. If oil prices turn around, shares could rebound, but otherwise its outlook seems bleak. The department store industry is struggling with the emergence of fast fashion and e-commerce, and the currency and commodity conditions that have weighed on Stage seem unlikely to change in the near future. Therefore, investors seeking a safe investment should look somewhere else.

A better bet in the department store industry may be J.C. Penney (JCPN.Q). The once-ailing chain is on its way back to profitability and posting strong comparable sales growth. The company has also beaten estimates solidly for the last four quarters, and that's a trend you want to get behind.

The past year has seen Stage's shares shed more than 60% of their value, and it's clear why. For investors looking for safety, that should be a red flag.

Why Stage Stores Stock Was Cut in Half Today

3 Retail Dividends That Could Disappear