Understanding an automaker's financials is important, but so is understanding the quality of its relationship with retail consumers.

When researching investments in my portfolio, or those that I'm considering purchasing, doing grassroots research is at the top of the list. For instance, there could be a huge discrepancy between a stock price of an auto company and what's going on at the companies' dealerships. The stock could be hot, but are its latest vehicle designs popular? The stock price could be down, but is customer satisfaction at its dealerships better than at its competitors? Sure, it's important to stay abreast of a company's financials, but it's just as important to understand how it's doing in the trenches with consumers.

Obviously, as a retail investor, it can be difficult to gather data on such grassroots topics. That's why glancing over reports such as J.D. Power's 2016 U.S. Customer Service Index (CSI) Study, can be hugely beneficial. Let's take a look at what J.D. Power's study covers, and which automakers it shows are performing well.

Recalls had a direct impact
This year's study was based on more than 72,000 responses from owners and lessees of 2011 to 2015 model-year vehicles; it measured consumer satisfaction while vehicles were being serviced or repaired. Further, the study was based solely on consumers' first three years of ownership.

The view from the top shows that overall customer satisfaction averaged 854 in the luxury segment, on a 1,000 point scale, and 797 in the mass market segment. Both of those results were slight improvements compared to the 852 and 792 scores, respectively, from 2015's study. However, as more than 51 million vehicles were recalled in 2015 -- a record year -- customer satisfaction dropped from 789 to 781 year-over-year. The satisfaction level among customers whose service call was unrelated to a recall was 809.

What's interesting to me, though, is that while General Motors (GM -0.10%) powered the industry's recall numbers in recent years with its huge ignition key issue, the automaker still scored well in the study. 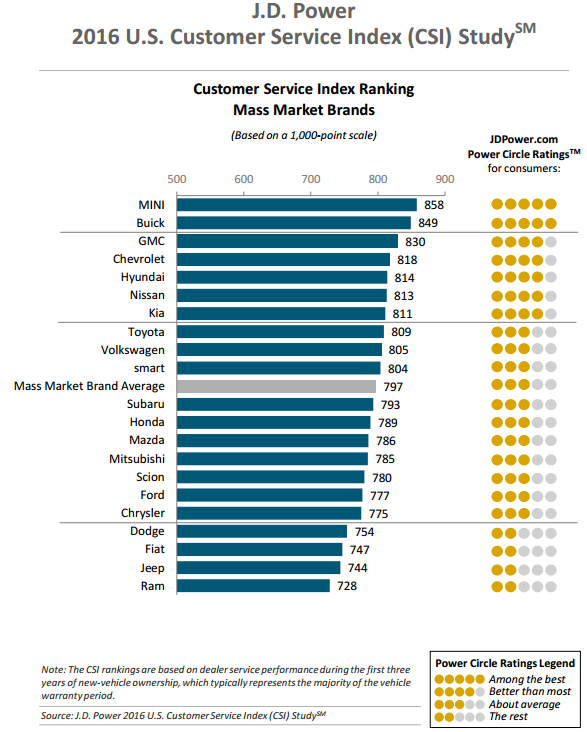 Despite having recalls into the tens of millions during the scope of the study's three-year ownership timeline, GM's three mainstream brands landed at second, third, and fourth place, which is very impressive. Its luxury Cadillac brand took third place in the luxury segment, behind only Lexus and Audi, but well ahead of Mercedes-Benz, Jaguar and Lincoln, which were the only other brands to come in above average. 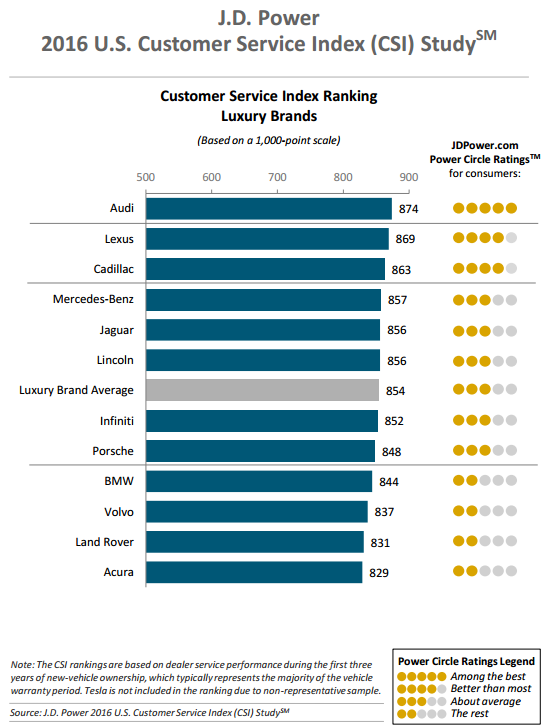 Other surprises
Sadly for Fiat Chrysler Automobiles (FCAU), the company has struggled on many fronts with quality issues, and now apparently, it's got customer service issues too. Not only did FCA's mass market brands check in at the last five available spots, it held the entire bottom tier to itself with only Chrysler checking in at "about average", in terms of J.D. Power's circle ratings – despite being more than 20 points below the mass-market average.

Another surprise was that 17% of consumers are willing wait less than an hour or not at all for service, which is a big chunk of the respondents. That means, if you're an investor, you'll want to know if your automaker's dealerships often offer loaner vehicles or shuttle service. But even the small things make a difference: J.D. Power notes that scores improve by about 44 points when a service advisor greets customers within two minutes of their arrival, but surprisingly, 27% of customers noted they had to wait longer.

"There is a need for consistency in the service experience, regardless of the reason for the visit," Said Chris Sutton, vice president of U.S. automotive retail practice at J.D. Power. "A lack of consistency, particularly for recall work, can damage customers' perceptions of the brand and negatively impact their likelihood to recommend and repurchase the brand."

At a time when auto recalls have been a common theme in the news, especially for GM, it's interesting for investors to note that GM brands posted some of the best scores, while FCA's posted some of the worst. These results are definitely something to consider if you're thinking about investing, as end consumers' experiences with dealerships, as well as their experiences with the vehicles in general, are almost as important as an automakers most recent financial data.