Chesapeake Energy, Freeport-McMoRan, and Seadrill have effectively doubled off their bottom.

After taking a beating for more than a year, energy stocks have been on a tear over the past month and a half after crude oil surged off its bottom and recently rebounded to over $40 a barrel. It's a rally that's fueled some of the most beaten-down names to more than double off their bottom in the just past few weeks, including well-known names such as Chesapeake Energy (CHKA.Q), Freeport-McMoRan (FCX -0.77%), and Seadrill (SDRL): 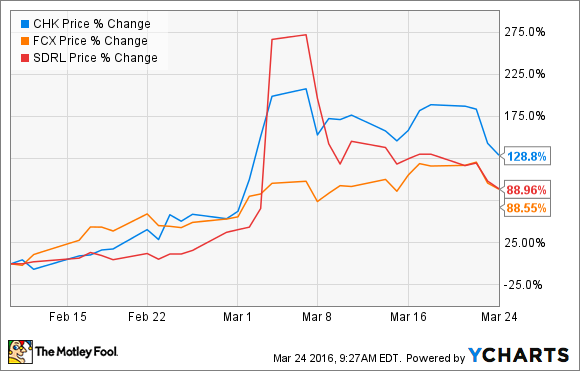 This rally has investors wondering if the worst is over and if now is the time to dive back into these stocks to catch the next wave higher.

Debt: The weight of the world
Aside from slumping oil prices, the reason these three energy stocks in particular have slumped so badly over the past year, with each still down more than 50%, is that all three have very hefty debt loads. Each amassed more than $10 billion in debt over the past decade, which has been used to fund their growth. 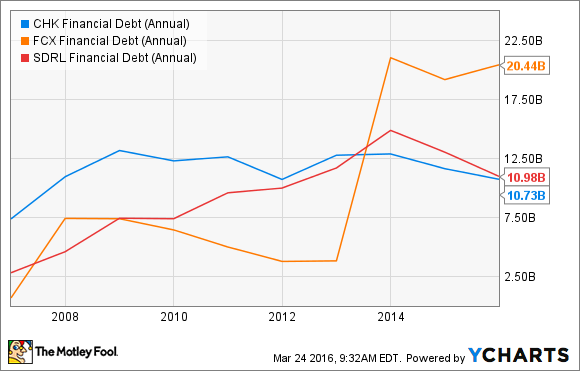 It's debt that was manageable when oil was over triple digits, but has become a heavy burden now that crude is a fraction of that price.

That's forced each company to take a variety of actions to repair their beleaguered balance sheets. All three companies have stopped paying dividends to shareholders in an effort to retain that cash flow and use it to support their borrowings. In addition, most have sold assets to bring in much needed cash to pay down debt with Chesapeake selling a bevy of non-core assets this year, while Freeport-McMoRan has had to part with minority stakes in some of its core copper mines. However, most of these cash infusions have been relatively minor compared to the vast amount each still owes.

Holding out hope
It's the promise that all three will do more than just chip away at their debt that's behind the recent rise in their stock prices. Chesapeake Energy, for example, is exploring a whole host of options to address its balance sheet woes, including parting with an emerging asset and attempting another debt exchange. Meanwhile, Freeport-McMoRan has been telling investors for more than a year that's its looking at all the strategic options for its oil and gas business. Even Seadrill has told its investors that it's working on a funding plan. It's a plan that has fueled rumors that its chairman and leading investor will bail the company out by leading an equity infusion, especially after he sold a large stake in another of his holdings this year, netting more than a half-billion in cash.

Having said all that, as of this moment all of these reports and rumors are just that. So far, none of these companies have made meaningful progress in addressing their debt. Instead, these stocks are rising on both the hope of higher commodity prices as well as the hope that these companies will do something to address their balance sheet woes. It's really anyone's guess whether or not either will actually happen.

Oil might not keep going higher because there's still so much of it in storage. While global energy producers are getting serious about putting an end to growing that glut by freezing production, such an output freeze might not happen. Not to mention the fact that simply freezing production still doesn't solve the supply glut, which could take a long time to be worked off, keeping a lid on the price of crude.

Turning to more company specific actions, Chesapeake Energy might not be able to sell assets for as much as it had hoped because every single other beleaguered oil and gas driller is trying to do the same right now. It also might not have any better luck with another debt exchange offer as it had with its last attempt. Freeport-McMoRan, meanwhile, has been talking about doing something with its oil and gas business for over a year. In the meantime, the value of that business has plummeted along with oil prices. Finally, Seadrill's management team is the same one that said it was "increasingly comfortable that this period [of dividend stability] can be extended well into 2016 without any significant recovery in the market" and then completely suspend that payout 90 days later. So, it's ability to develop a sustainable funding plan isn't a sure thing. Worse yet, even if oil prices rallied to the level needed to make offshore drilling an economic option for oil companies, Seadrill's CEO warned that it could be 12 to 18 months before that trickles down into improved offshore drilling dayrates for Seadrill.

Investor takeaway
Not one of these three companies have made meaningful progress in addressing their debt situations. Because of that the worst might not be over. If oil takes another turn for the worse, it could sink these companies before they can enact a plan. Worse yet, all three have talked a good game over the past year and a half, but not one of them have taken the meaningful action to address the situation. Instead, they've watched conditions grow worse. Bottom line, its best watching these three energy stocks from the sidelines until they actually make some real progress that puts them on a path toward long-term sustainability.