Is one of these retail REITs a better choice right now?

When it comes to REITs, some of the biggest and best in the business focus on retail real estate. Two big players in the retail space are Realty Income Corporation (O 0.21%) and Regency Centers (REG -0.91%), although they have slightly different business models. Let's take a look at these two retail REITs, and see if we can determine which one might be the better buy right now.

Two different kinds of retail REITs
The biggest difference between the two REITs is the types of properties they buy. Realty Income focuses on freestanding retail properties, while Regency Centers focuses on shopping centers anchored by grocery stores.

Realty Income owns more than 4,500 properties spread throughout the U.S., and the vast majority of them are freestanding retail. The company's business model is fairly simple -- acquire well-located, single-tenant retail properties, and lease them back to high-quality tenants for long periods of time, thereby generating a growing, predictable stream of income.

On the other hand, Regency Centers owns 318 shopping centers in targeted metropolitan areas, 85% of which are anchored by grocery stores such as Kroger, Albertsons, and Publix. Both have been publicly traded REITs for about the same amount of time -- Realty Income and Regency Centers issued IPOs in 1994 and 1993, respectively.

Growth strategies
One of the biggest differences in growth strategy between the two is that Realty Income isn't really engaged in development, whereas development and redevelopments are cornerstones of Regency's strategy to deliver attractive returns.

Realty Income likes to acquire properties that already exist. The company conducts a thorough analysis of the property, tenant, and underlying business, and selects properties that meet its objectives.

Regency Centers is actively involved in development, and it's easy to see why. Since 2012, the company has spent more than $450 million on development, which has produced an estimated $200 million in value creation. By developing its own properties, Regency can hand-select its properties' locations in its target markets. In fact, the average Regency property is located in an area with average household incomes of more than $100,000.

What are the risks?
Although I wouldn't characterize either of these REITs as "risky," there is no such thing as a risk-free stock. So, here's what you should know before investing in either company.

More than 90% of the company's retail tenants fall into one or more of these categories. The point here is that these business types are resistant to competition from e-commerce and tend to hold up well during tough times. This is evident in Realty Income's 98.4% occupancy rate, which has never fallen below 96%, no matter what the economy or real estate market was doing.

However, Realty Income isn't without risk. Like most REITs, the company is susceptible to rising interest rates, which can make acquisitions more expensive. While I consider it unlikely, it's entirely possible that one of the company's major tenants could go bankrupt. There are currently 14 tenants that make up more than 2% of Realty Income revenue, so this could have a significant effect.

Similarly, Regency Centers also aims to invest in Internet-resistant retail, although not quite as much as Realty Income. Internet-resistant businesses make up 69% of Regency's portfolio, but it does have a significant amount of tenants in electronics retail, financial services, sporting goods, and several other types of retail that could see their market share stolen by online competitors. So, it's fair to say that Regency's portfolio is somewhat riskier.

We can see this in Regency's 95.8% occupancy rate -- still impressive, but not quite as high as Realty Income's. And, this dipped to as low as 92% in 2011 in the aftermath of the financial crisis.

Capital
Another important factor is how much debt these REITs take on in order to finance their purchases.

Realty Income has a pretty conservative capital structure, with just 27% of its capitalization in the form of debt, and another 2% as preferred stock. Most of the debt is fixed-rate, and its average interest rate is 4.4%. In all, Realty Income has an impressive four-times fixed-charge coverage, which means that for every $1 in interest payments and preferred stock dividends, the company brings in $4. And, the company has great access to capital with a $2 billion revolving credit facility.

Regency has a similar capital structure, with debt representing about 29% of its capitalization. However, the fixed-charge coverage of 2.8-times is significantly lower, which means that the company's ability to pay its debts in tough times isn't quite as solid -- although this is still a good coverage ratio. This is mainly due to Regency's higher-interest debt -- the company pays an average of 5.5%, more than a full percentage point higher than Realty Income's.

Performance history and dividends
It's tough to find a stock with a stronger dividend history than Realty Income. The company has paid 546 consecutive monthly dividends, and has increased the payout for 74 consecutive quarters by an average rate of 5% per year. As of this writing, the current monthly payment translates to a 3.89% annual yield.

On the other hand, Regency pays a quarterly dividend of $0.50 per share (2.73% yield), but the path has not been as consistent, as you can see in the chart below. 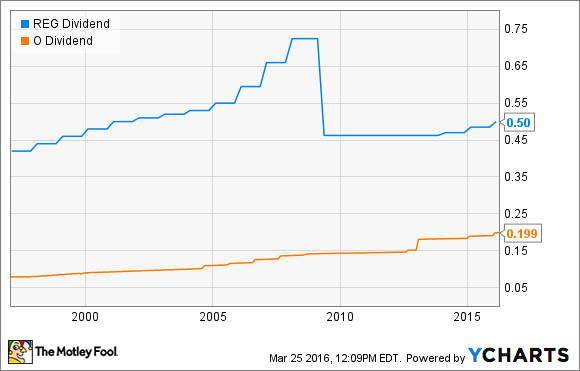 Valuation
One potential wild card is valuation -- after all, a stock with slightly more risk and lower performance could potentially be the better investment if the price is right.

When valuing REITs, it's important to use funds from operations (FFO), not earnings per share. Because of how REITs account for certain items, FFO is the more accurate way of assessing a REIT's profitability. Realty Income produced adjusted FFO of $2.74 in 2015, so it trades for 22.4 times TTM FFO as of this writing. Regency's 2015 FFO of $3.04 an even higher price-to-FFO multiple of 24.1.

So, which is the better buy?
I feel like this one is a no-brainer. Realty Income has the less-risky business model, lower-interest debt, and has a far superior dividend and performance history. And surprisingly, it actually trades for a lower valuation than Regency Centers. To be completely clear: Regency Centers isn't a bad stock -- far from it, actually. It's just not Realty Income. While past performance doesn't guarantee future investment gains, all of the information here points to Realty Income as the better buy.

This Dividend Stock Wants To Supersize Its Growth Prospects

These 3 Stocks Have Already Doubled in 2023 -- Could They Keep Rising?

Here's Why the Worst Is Over for AGNC Investment Stock
413%