It was a good week for healthcare ETFs, but this one fund put up a stellar performance.

It has been a rough couple of days to be an investor, as the markets ended the short trading week a bit lower than they started. However, healthcare-focused investors didn't really feel a lot of pain this week as several of the largest exchange-traded funds that focus on the space put up positive weekly returns. One fund in particular -- the SPowerShares Dynamic Pharmaceuticals ETF (PJP 0.98%) -- was this week's top performing, gaining 1.90% during the period, which was well ahead of the -0.62% return of the S&P 500. 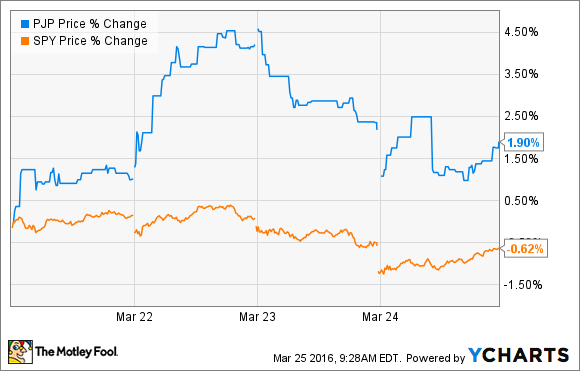 So, what is this ETF doing right that allowed it to sidestep the market's carnage this week? Let's take a closer look.

What sets the PowerShares Dynamic Pharmaceuticals Portfolio ETF apart from other healthcare ETF is that it invests the majority of its capital in the pharmaceutical sector, and it does so in a fairly concentrated manner. This ETF currently holds a position in 23 different companies, so if a handful of those holdings have a good or bad week, so does this fund.

That might sound like a risky strategy, but it's not as crazy as it sounds. In order to help keep the fund's volatility in check, it tends to buy positions in the biggest players in the industry, as its current average market cap is north of $70 billion.

Take a look at the current list of this fund's top 10 holdings to see what I mean.

What went right this week?
The majority of this fund's top 10 holdings ended the week in the green, but two companies in particular -- Allergan PLC (AGN) and Amgen (AMGN 0.32%) -- put up terrific performances, making them two of this fund's biggest winners this week. 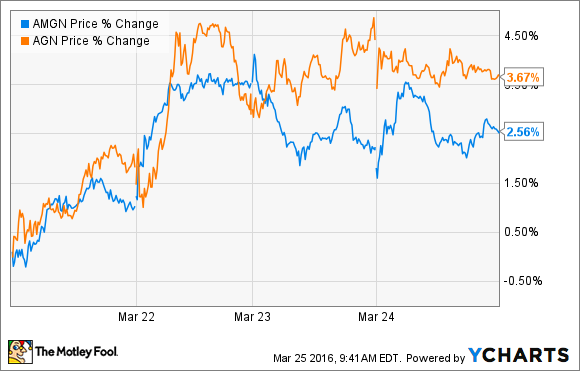 Allergan was in the news a handful of times this week as the company and its partner Perrigo announced they would be launching a generic, over-the-counter version of the hit drug Mucinex for sales in the U.S. this week. Mucinex, which is used to break up mucus and relieve chest congestion, is marketed by Reckitt Benckiser, and sales of this drug were about $71 million in 2015. While that's a small number compared to Allergan and Perrigo's massive size, it still looks like it could be a nice opportunity for the two companies to continue to build out their generic drug division.

In a separate release, Allergan announced its "double chin" treatment Belkyra has been approved for sale in Canada. Known as Kybella in the U.S., this facial aesthetic treatment is expected to generate peak sales of $400 million in the U.S. alone, so adding another wealthy country to the list appears like it could be a nice win for investors.

Amgen also had a few news items hit the wire this week that put investors in a good mood. First off, it announced positive top-line results from a phase 3 trial for its experimental osteoporosis drug Romosozumab. The trial showed that men with osteoporosis who used Romosozumab demonstrated a statistically significant increase in their bone mineral density at the lumbar spine versus those who took placebo. That allowed the drug to meet both its primary and secondary endpoints. The company and its development partner UCB plan to present the data at future medical conferences and will be discussing the results with regulators to get next steps for a submission.

In other news, a court hearing involving Amgen got under way this week. Amgen has gone on the offensive against Sanofi and Regeneron Pharmaceuticals as it is trying to prevent the companies from selling their new cholesterol-lowering drug Praluent, a PCSK9 inhibitor. Amgen is doing so because last week, a jury upheld two of the company's patents on its own PCSK9 inhibitor, Repatha, from a lawsuit filed in 2014.

It's unclear whether or not Amgen will be successful in its endeavor, but since the market for PCSK9 inhibitors looks like it could be huge, keeping a competitor off the market would be a major win for the company.

Can the PJP continue to win?
This ETF offers investors an easy way to gain exposure to the biggest players in the pharma space, which is a formula that has worked out beautifully so far. That could make this fund an easy and low-cost way for investors to bulk up their exposure to the healthcare sector.