After being forced to lower its dividend, ConocoPhillips can’t be considered an ultra-safe stock.

The word safe can be defined as "protected from or not exposed to danger or risk; not likely to be harmed or lost." If we were to apply that definition to a stock, it would suggest a company that is protected against an extreme outside risk factor that could cause the stock price or its dividend to fall dramatically. Given what has happened to ConocoPhillips' (COP 1.90%) stock and dividend over the past year, it's appropriate to say that it doesn't exactly fit the definition of a safe stock: 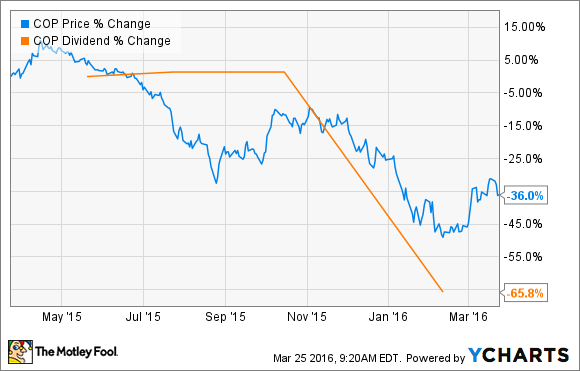 Having said that, while investors hoping for safety have been disappointed after both their investment in ConocoPhillips and its income stream have declined sharply over the past year, it is still among the safer oil stocks.

Exposed to risk
As an oil producer, ConocoPhillips is exposed to a number of risks, not the least of which is the volatility of oil prices. In fact, when looking at the risk factors in its annual report, this is the first one listed, with the company warning that "[o]ur operating results, our future rate of growth and the carrying value of our assets are exposed to the effects of changing commodity prices." As the company goes on to note:

This decline in prices has a direct impact on its cash flow, which affects not just its ability to maintain and grow its production but its dividend as well. It's because prices have been so weak that it has been forced to eliminate growth-focused spending and reduce its dividend in order to better balance cash flow with those two outflows: 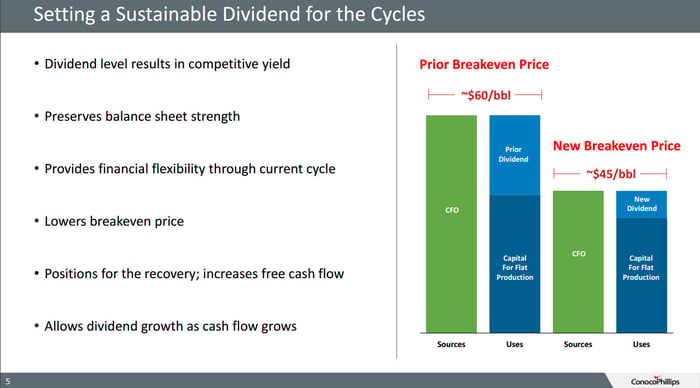 Still, the company has been much better able to deal with lower oil prices than many of its weaker competitors, as evidenced by its continuing to pay a dividend while at least maintaining its current production rate. That's partially due to its geographic and asset diversity, as well as its relatively strong balance sheet.

All is not lost
It's that balance sheet strength that should prevent the company from getting anywhere close to the brink of bankruptcy, which is where we find a growing number of oil and gas producers these days. Instead, ConocoPhillips boasts of an investment grade credit rating, though that was recently downgraded from A1 to Baa2 based on the assumption that its debt levels would rise over the next two years above the targets for an A1 rating.

That said, a Baa2 rating implies easier access to credit and better borrowing rates than companies with lower ratings. That makes it a safer bet than Anadarko Petroleum (APC), which just had its credit rating downgraded below investment grade due to its already higher relative debt levels. That elevated debt led its rating agency to assume that the company's financial flexibility would be diminished to the point where it could no longer maintain production. In fact, the only reason Anadarko Petroleum will be able to maintain its production in 2016 is by selling assets, resulting in flat adjusted production. Furthermore, in having its credit rating downgraded from Baa2 to Ba1, it suggests that Anadarko Petroleum faces major uncertainty about its ability to meet its financial obligations should industry conditions worsen whereas ConocoPhillips credit rating implies that it is less vulnerable in that situation.

Investor takeaway
ConocoPhillips isn't as safe as most other large-cap stocks because it is directly exposed to volatile commodity prices. That being said, compared to a lot of other oil stocks, it is a much safer investment because of its strong balance sheet, which earns it a much higher credit rating. That strength should protect investors from the potential of losing their entire investment, something that can't be said for some other other oil stocks right now.