Please ensure Javascript is enabled for purposes of website accessibility
Log In Help Join The Motley Fool
Free Article Join Over 1 Million Premium Members And Get More In-Depth Stock Guidance and Research
By Timothy Green - Mar 29, 2016 at 12:32AM

Both JetBlue and Alaska Air have reportedly made bids for the airline, and a deal could be announced as soon as next week.

So what: On March 23, Bloomberg reported that Virgin America was reaching out to potential buyers after receiving takeover interest. The airline, with just $1.53 billion of revenue during 2015, is one of the smaller airlines operating in North America. The company currently operates a fleet of 58 Airbus A320 aircraft, and expects to bring this number up to 63 by mid-2016. JetBlue generated $6.4 billion of revenue in 2015, while Alaska Air generated $5.6 billion.

According to Bloomberg, both JetBlue and Alaska Air have made takeover offers, and discussions between Virgin America and both companies are still ongoing. Bloomberg's sources stated that a deal could be announced as early as next week. There's still time for another bidder to potentially emerge, driving up the deal price, and there's always the chance that Virgin ultimately decides to remain independent.

Now what: Shares of Virgin America are now up about 21% since the March 23 report that the company was considering offers, bringing the stock back up to late 2015 levels. Virgin America went public in late 2014, debuting at $23 per share, and the stock reached an all-time high of around $44 per share soon after. 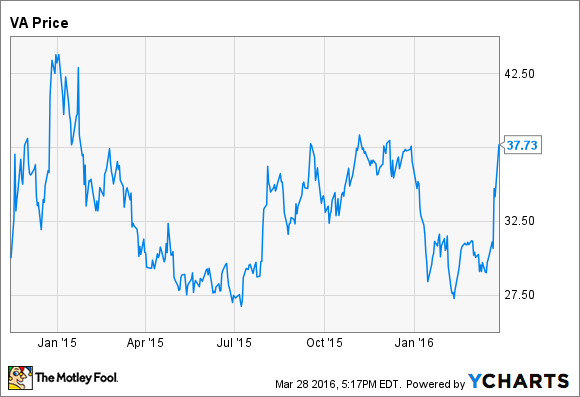 There's no guarantee that Virgin America will agree to a buyout, and buying a stock solely based on the hopes of an acquisition is generally not a great idea. Virgin America is coming off of its most profitable year to date, so the company certainly doesn't need to sell itself. If a deal does take place, a hefty premium seems likely.

2 Stocks to Look at for the Post-Pandemic Travel Boom

Why Travel Stocks Are Dropping Today