The ailing department store chain is coming back, but there are still better picks out there in the retail sector.

J.C. Penney (JCPN.Q) may finally be back from the dead after reporting a profit over the holiday quarter, but the company still faces plenty of challenges ahead.

With $4.7 billion in debt, the department-store chain is hamstrung when it comes to making major capital improvements, and it still operates in an industry -- department stores -- that is quickly losing ground to e-commerce and fast fashion rivals. Many of J.C. Penney's rivals posted awful fourth quarters, and Penney seems to have gained mostly because it had so much room for improvement following Ron Johnson's reign. Many of its locations are also found in "B" and "C" malls that are losing traffic, meaning there may be little the company can ultimately do to salvage those stores.

While the stock seems to have some short-term upside, over a longer horizon, the challenges may be too great for it to return to its former profitability levels. If you're looking for a more promising retail stock, here are three other alternatives to consider.

1. TJX Companies (TJX -0.68%)
The parent of T.J. Maxx, Marshall's, and HomeGoods has ruled retail lately. TJX posted 6% comparable sales growth over the holiday quarter, lapping a 4% jump the year before, numbers that are essentially unheard of in apparel retail these days. 2015 was also the company's 20th consecutive year of increasing comparable sales and EPS, showing that as its department store rivals falter, it continues to gain market share.

TJX's combination of value, convenience, and assortment is winning over shoppers. Unlike department store chains, TJX locations are often located in strip malls where customers can simply park outside and walk right in, or pair a visit to TJ Maxx with a trip to the grocery store.

The retailer's model also takes advantage of scarcity, as the off-price nature of the business means that items rotate quickly, incentivizing frequent visits and the need to purchase something you like when you find it.

Finally, the company's off-price model and "treasure hunt" experience have been hard to replicate online, insulating it from one growing competitive threat.

2. Ross Stores (ROST -1.33%)
Ross Stores have found success with much the same model as TJX Companies. It's therefore no surprise that both stocks have more than tripled in the last five years, tracking nearly in unison. 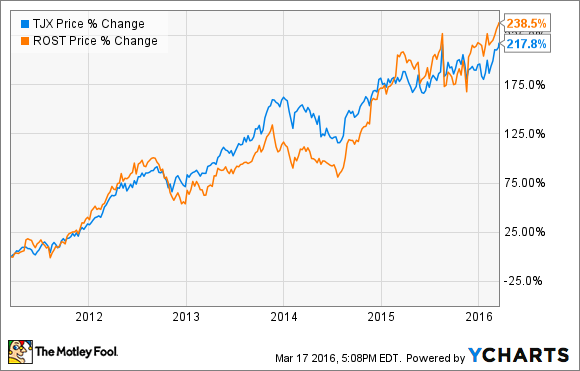 Like TJX, Ross has thrived largely because of Americans' taste for bargain-hunting and the off-price fashion retail model. While TJX has more stores than Ross, Ross actually has more under a single banner, as TJX's are divided into TJ Maxx, Marshall's, and HomeGoods.

Ross also has a higher operating margin than TJ Maxx, and no exposure to international markets, which is a strength in today's strong dollar environment. Ross saw comparable sales rise 4% in its most recent quarter, on top of a 6% increase in the prior quarter, capping off a year that saw 14% growth in EPS. Results also beat Wall Street expectations.

Recent developments, namely the growth of e-commerce and the rise of fast fashion, have upset the retail sector, but TJX and Ross have shown they have the right formula to meet the needs of today's customers. That trend is likely to continue, as there are no signs of it abating.

3. Dollar General (DG 1.43%)
Finally, Dollar General is a different kind of retailer that has bucked the negative trend in the industry. Like TJX and Ross, the company seems protected from the threat of e-commerce. As a convenience and value chain with more than 12,000 locations, its customers aren't searching online for merchandise like food, cigarettes, and household products, giving it an advantage over other physical retailers. It's also found a neglected niche with low-income Americans, who are a growing demographic in this era of income inequality and have more money to spend thanks to low gas prices. In its recent quarter, the company noted that additional purchases of candy, snacks, and cigarettes helped drive higher sales, which are all categories that would benefit from increases in discretionary income.

Dollar General just completed its 26th straight year of comparable sales growth as EPS improved 13%. The company set a long-term goal of 11%-17% EPS growth, and also plans to open 900 new stores next year. Like TJX and Ross, the stock has soared over the past five years, nearly tripling, and with aggressive growth plans ahead and the right retail formula for the current macroeconomic environment, Dollar General should continue moving higher.