Please ensure Javascript is enabled for purposes of website accessibility
Log In Help Join The Motley Fool
Free Article Join Over 1 Million Premium Members And Get More In-Depth Stock Guidance and Research
By Reuben Gregg Brewer - Apr 1, 2016 at 9:15AM

You probably don't think about your tap water too often, but you should -- it could be a huge investment opportunity.

American Water Works Company (AWK 1.98%) isn't a household name. And while it's a utility, this water company seems to get hidden under all of the electric providers that hog the utility spotlight. But that shouldn't stop you from paying close attention to its stock, because it wouldn't take much for it to soar even higher that it has. Here are three things to watch.

1. Costly fixes
American Water Works is a utility. It has monopoly power, but it has to get its rates approved by the government. That's a trade-off that works reasonably well and creates a stable business. Only there's something different in the water space: neglect. Our water infrastructure is old and needs huge upgrades. Putting a number on this, American Water Works explains that by 2020 over $1 trillion will need to be spent to upgrade U.S. water systems. 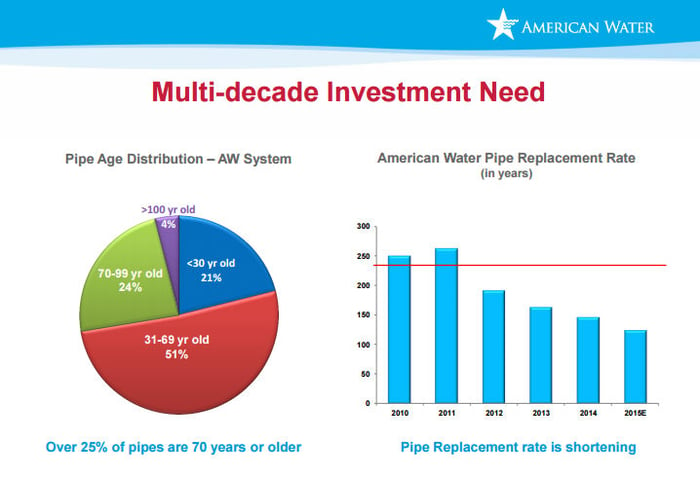 Because water is a basic necessity, these investments really aren't optional. And that plays right into a water utility's hands, since regulators provide rate increases for spending on improvements like the ones that really have to be made. That's a core reason American Water expects to generate growth of around 4% to 6% from its regulated business between 2016 and 2020. The growth that goes along with this spending should help to attract more investors to the American Water Works story. Oh, just for reference, the company spent more on capital projects last year than it ever has before.

2. That's a lot of money
But there's more to watch here. Roughly 85% of water systems and nearly 100% of wastewater systems are owned by municipalities or some other non-public entity. That's an opportunity for a large, diversified water player like American Water Works to add new water systems to the over 370 it currently runs.

Take a step back and think about that. American Water Works owns around 370 water systems, and there are other big players in the industry, such as Suez Environmental and United Utilities Group. And still only 15% or so of the U.S. water business rests in the hands of public companies, and virtually none of the waste water business.

Now look at the finances of local towns and cities and compare that to the bills they are likely to face to upgrade their water systems. American Water Works and its peers are likely to become increasingly desirable partners for cash strapped towns. And not just because selling a water system will raise revenue today, but because it will save the municipalities from huge bills (or worse) down the line. 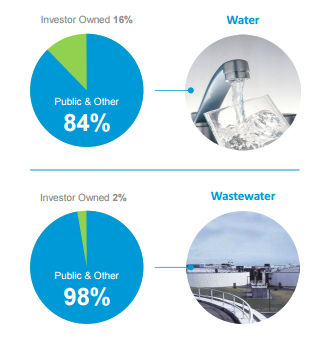 Acquisitions, then, should be a huge opportunity for American Water Works to keep growing its business. But that will also keep its capital spending high, which regulators should reward with rate increases. As all of this unfolds, investors are likely to continue to push the shares higher.

3. Dividend growth
At this point, you could get drawn into a discussion of American Water Works' other businesses, such as dealing with the water used for drilling for oil and gas. That's an interesting sideline that could lead to higher growth, but focusing on it would miss a key point. You see, American Water Works isn't just a utility; it's a utility that's managed to increase its dividend at an annualized rate of over 9% for the past five years. Last year it jumped that payout by nearly 9.7%.

You could counter that investors already know this story, which is why the shares yield just 2% or so today. But some of the largest electricity companies, such as Southern Company (SO 1.04%) and Duke Energy (DUK 1.03%), managed only low-single-digit dividend growth over that span. Southern's dividend growth of 3.6% annualized over the past five years only managed to squeak by the historical pace of inflation (around 3%), while Duke's 2.2% fell short of that mark. American Water Works' dividend, on the other hand, grew three times as fast! 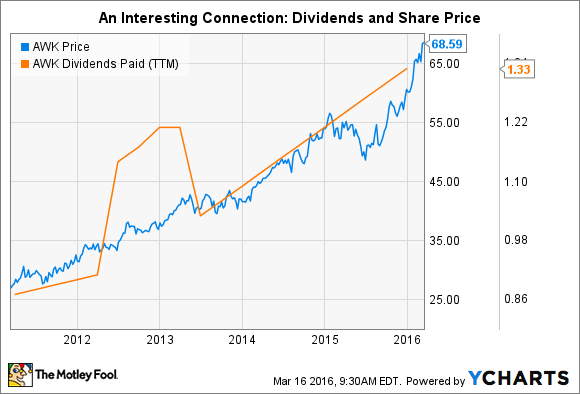 You might look at all of this and think back to other acquisition-led growth areas like pipeline MLPs that haven't worked out so well. First, American Water Works has a reasonable amount of debt for a utility, at around 55% of the capital structure. And while the pipelines MLPs own are regulated, the need for transporting oil and gas is materially different than the (biological) need for water--and proper care and upgrading of an ageing U.S. water system. That's not to suggest that you shouldn't keep an eye on American Water Works' finances, but oil pipelines and water utilities are very different industries.

Opportunity for a higher price
Add it all up, and it looks like the stars are aligned for a higher stock price at American Water Works over the long term. First, it has built-in growth from the spending that it has to do and that regulators, frankly, want it to do. Second, as municipalities look at the bills to fix their own systems, a lot are going to look to partner up with a company like American Water Works -- which will further boost growth at the company. And third, all of this should lead to robust dividend growth, which investors love. Forget adding another boring old electric utility to your portfolio -- American Water Works' shares look like they could continue to soar and pay you well along the way, too.