Please ensure Javascript is enabled for purposes of website accessibility
Log In Help Join The Motley Fool
Free Article Join Over 1 Million Premium Members And Get More In-Depth Stock Guidance and Research
By Matthew DiLallo - Apr 1, 2016 at 10:32AM

While the bankruptcy risk is low at the moment, this isn’t a safe oil stock.

Oil stocks are much riskier than most other stocks because of their direct exposure to volatile commodity prices, which as we've seen over the past two years can change on a dime. That said, some oil producers do a much better job of managing this risk, thanks to their larger scale and stronger balance sheets. Unfortunately, none of those things describes Pengrowth Energy (NYSE: PGH), which is not as safe as its larger peers. That's quite evident when we look at some of the austere measures the company has had to take over the past year in an effort to stay afloat.

Say goodbye to growth and income
For most investors, a safe stock is one that can deliver rather stable growth and income. That's a path Pengrowth Energy tried to follow in the past, but it hit a roadblock after oil prices crashed.

Given that the company used a lot of debt to fund its growth in prior years, the significant drop in oil forced it to change course so that it could better manage its balance sheet. That resulted in its dividend being reduced and then suspended in order to save the company about $250 million in cash flow.

In addition to that lost income, growth has also gone by the wayside. After keeping its production roughly flat last year and at the high end of its guidance range and despite spending 80% less than the prior year and selling assets accounting for 13% of its production, Pengrowth sees its production slumping 16% in 2016. That's partially due to its inability to invest enough capital to overcome the natural decline rate of legacy wells and the shut-in of production from uneconomic wells.

Pengrowth has been forced to sell assets, shut production, slash investment, and cut its dividend because its balance sheet is weighed down by debt. Currently, the company owes about $1.8 billion, which is a lot for a $2.3 billion company. Also, more than $500 million of that debt is maturing next year, which is a problem because the credit markets have seized up, making it nearly impossible to roll over that debt. 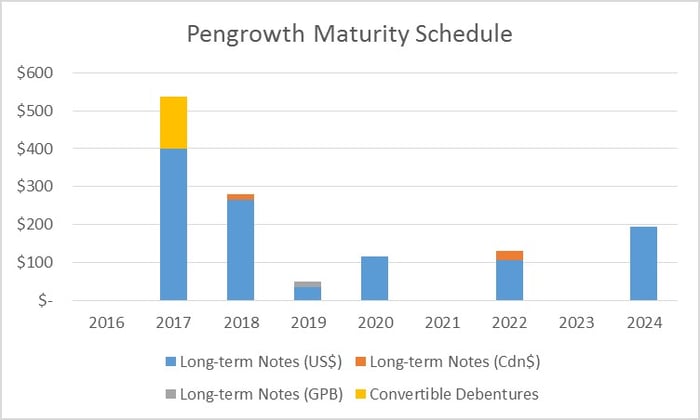 The company hopes to address the bulk of that debt by generating $280 million in excess cash flow this year and another $300 million from non-core asset sales. Since those two sources would fully cover its 2017 maturities, bankruptcy isn't much of a concern.

Little room for error
What is a concern is the fact that the company is projected to get awfully close to the leverage convents it has set with creditors. As the following slide shows, it is expected to nearly bump right up against its bank and noteholder limits by the fourth quarter of this year, though that is assuming oil averages $30 a barrel this year: 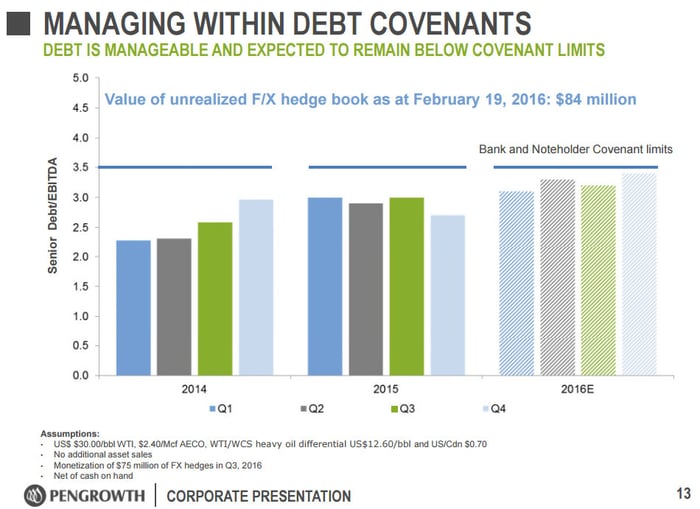 That's playing with fire for a lot of investors. That said, at least Pengrowth is projected to stay below the line and at a much lower oil price than the current price. That's much better than rival Penn West Petroleum (NYSE: PWE), which has already said that it expects to breach its debt covenants by the end of the second quarter. Worse yet, Penn West's covenants are set at a much higher 5.0 times debt-to-EBITDA ratio after its creditors raised its limits a year ago to give it more breathing room. Because of its deep balance sheet woes Penn West recently was forced to part with its core Slave Point assets, after agreeing to sell them for a mere $148 million in order to increase its financial flexibility.

Pengrowth is in a bit of a better position because it doesn't have to part with core assets in order to stay afloat. Furthermore, given its sub-3.5 times EBITDA ratio and the fact it's not projected to breach its covenants this year, Pengrowth is at least a safer oil stock than Penn West is right now. So, while it has little room for error, it still has a bit more breathing room than some of its other peers.

Investor takeaway
Pengrowth might not be teetering on the brink of bankruptcy like some of its peers, but it's still hard to call this a safe stock. Due to a large debt load, the company has had to stop growing and cease paying a dividend in order to divert every bit of excess cash flow it has to reducing its debt. That's still not projected to be enough, with the company likely needing to sell additional non-core assets to pay back looming debt maturities. Because of that, investors looking for safety need to look elsewhere until the company has cleaned up its balance sheet.