Evaluating the risks involved for investors in owning this cable titan.

After more than two years of regulatory review, Time Warner Cable (NYSE: TWC) appears to be close to winning approval of its proposed merger with Charter Communications (CHTR -0.87%). Reflecting that optimism, shares recently passed $200 to set a new all-time high.

Anything can still happen, of course, including more delays or an outright denial of the merger.

In the meantime, TWC remains an independent entity that's subject to a unique set of operating and financial risks that shareholders should understand. With that in mind, let's take a look at the main risks of owning this cable giant's stock

High-cost, high-debt business
Time Warner Cable operates in an industry that requires heavy capital spending and, as a result, tends to saddle participants with gobs of debt. The company spent $4.4 billion on asset investments last year, up 10% over 2014. The spending was mainly on projects to improve availability, reliability, and access to its cable and high-speed data networks. Other key costs include content programming, which is critical to keeping those cable subscribers happy, that also spiked 10% higher last year. The cable giant's debt burden sits at $23 billion as of Dec. 31, representing just over 40% of its current market capitalization. That's a large burden, but interest payments on those liabilities has been manageable. At about $1.5 billion per year, they represent just less than one third of TWC's annual operating profit.

Flat operating trends
Baring a huge, quick disruption in its business, Time Warner Cable investors won't have to worry about debt sinking their company. The more pressing risk is that operating results turn lower over the long term.

That's been the case in the past few years as the company has suffered from defections in its cable subscriber base that powers about 80% of sales. The cable segment has shrunk from a high of 13 million paying customers in 2008 to less than 11 million now.

There's good news to report on that trend, as 2015 marked the first year of cable subscriber growth for TWC out of the last nine. However, the company had to spend more money per user to achieve that result, and so its segment operating margin has slipped from 37% of sales to 35%. Management hopes to reverse that trend by passing along higher costs through price increases, but only after raising customer satisfaction levels through service improvements.

Meanwhile, sharp gains in the high-speed data segment of the business have helped cushion the blow from a declining cable division. That success illustrates how TWC's revenue stream, while not diverse as rival Comcast's, can protect earnings and revenue even through rough times.

Cash returns
Direct cash returns can also serve to protect shareholders' investment through a downturn in the business, and in TWC's case, that cushion mainly comes from dividend payments. The company sends about $800 million per year to shareholders in dividends, representing a solid, but not too high 48% of annual profits. Share repurchase spending has dried up in advance of the Charter merger, but that healthy cash generation could fund more buybacks in the future. 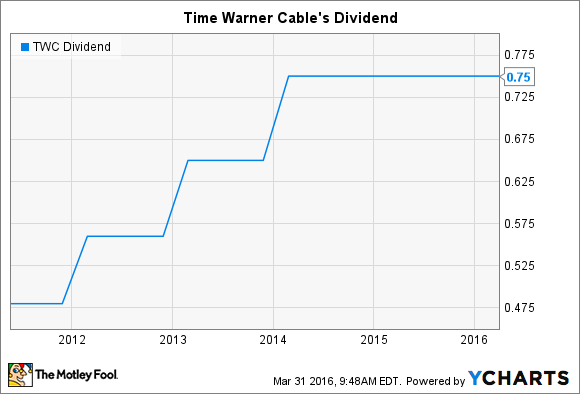 With its base of 15.1 million subscribers across cable, high-speed data, and phone services (up 4% year over year), Time Warner's business is infused with plenty of stability. Still, when judging the risk they're taking on, investors have to balance that rock-solid revenue base against the company's high debt, rising costs, and mixed outlook for growth.