Please ensure Javascript is enabled for purposes of website accessibility
Log In Help Join The Motley Fool
Free Article Join Over 1 Million Premium Members And Get More In-Depth Stock Guidance and Research
By Cory Renauer - Apr 4, 2016 at 10:01AM

Can the quick growing maker of Eylea beat an aging biotech behemoth?

The past year has been a bumpy ride for Regeneron (REGN 1.48%) shareholders. Although the stock has provided fantastic gains over the past several years, it's roughly 40% off peaks seen several months ago.

While Amgen (AMGN 0.38%) stock has given up more than 7% in 2016, the biotech behemoth is outperforming its peers. It is the largest holding in the iShares Nasdaq Biotechnology ETF which is down more than 23% this year.

If you're having trouble deciding between the recently returned astronaut, Regeneron, or slower but more diverse Amgen, you're not alone. Let's take a closer look at the Regeneron stock beat-down and a handful of Amgen developments to figure out which is the better buy.

Recent issues
Regeneron's top and bottom lines have exploded over the past several years, as it deftly earned several label expansions for Eylea. Regeneron has a partnership on with Bayer AG (BAYR.Y 2.92%) to handle ex-U.S. commercialization of Eylea, and the German pharma boosted annual ex-U.S. Eylea sales 36% to $1.4 billion last year. That led to a net profit for Regeneron of $466.7 million, or about 37% of Regeneron's annual operating profit last year.

Stateside, annual sales of the eyeball injection grew by an even healthier 54% to $2.68 billion, boosting Regeneron's total revenue to $4.1 billion last year. 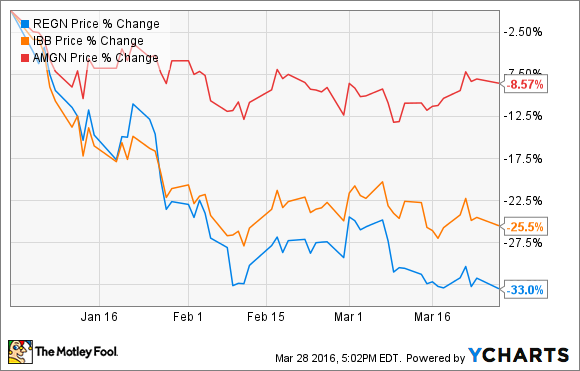 Regeneron didn't break down exactly what percentage of U.S. Eylea sales filtered down to operating profits, but it's clearly the company's biggest growth driver, and the market is watching it closely. To begin the year, Regeneron stock fell in line with the rest of its industry. However, since issuing upfront guidance predicting annual U.S. sales of Eylea to decelerate from 54% growth over 2014 to "approximately" 20% growth over 2015 in the earnings report issued Feb. 9, 2016, it's fallen even harder than its peers.

Amgen, meanwhile, isn't putting up growth figures anywhere near Regeneron's. What is has done is maximize profits from an aging line of biologics that should begin feeling pressure from biosimilars soon. Sales of its leading product Enbrel rose 14% to $5.36 billion based on price increases, rather than a boost in popularity.

The company ended 2015 with $31.4 in cash and marketable securities and generated a whopping $8.5 billion in annual free-cash-flow, nearly 9% more than it generated last year.

Looking ahead
Pricing pressure from biosimilar competition for Amgen's aging product line will pressure sales growth in the quarters ahead, but to what extent is unclear. What is clear is that Amgen has enough cash to potentially continue growing through acquisitions and to keep its bottom line steadily rising in the years ahead.

Beyond Eylea, Regeneron is expecting a partnership with Sanofi (SNY 0.65%) to round out its revenue stream with a new class of injected cholesterol lowering therapies called PCSK9 inhibitors. There might be some trouble ahead on this front. Sanofi and Regeneron's Praluent was approved by the FDA last July, and sales reached just $10.5 million through the end of 2015.

Amgen also has an FDA-approved PCSK9 inhibitor named Repatha. Both drugs are expected to reach peak annual sales of $3 billion, or share a market expected to peak at about $8 billion annually. Not so long ago during litigation proceedings, Sanofi and Regeneron acknowledged infringement of some of Amgen's Repatha patents, under the assumption the patents were invalid. On March 16 a federal judge ruled the patents were not invalid, and a hearing on a permanent injunction to remove Praluent from the U.S. market was scheduled to begin on March 23. So far none of the companies involved have commented one way or the other.

If an injunction doesn't give Amgen's Repatha an advantage over Regeneron and Sanofi's Praluent, recent results showing it superior to Zetia (a drug that blocks cholesterol absorption in the small intestine) among statin-intolerant patients could. Investors will want to watch out for Amgen's slew of Repatha presentations slated for April 2-4 at the American College of Cardiology's annual meeting.

At the moment, both PCSK9 therapies are limited to patients with a rare genetic condition that results in abnormally high cholesterol levels. If Amgen can be first to expand its label to all patients intolerant to statins, it will have the upper hand. If an injunction to keep Praluent of the U.S. market is enforced, Amgen would be positioned to dominate this space.

Beyond cholesterol, Amgen also has an FDA application pending for ABP 501, a biosimilar that showed clinical equivalence to Humira in treating psoriasis and rheumatoid arthritis. AbbVie recorded over $14 billion in Humira sales last year, including $8.4 billion in the U.S. alone. ABP 501 could begin competing with the megablockbuster by the end of September.

Value focus
With Eylea and Praluent, Regeneron investors were (and still are) expecting some pretty amazing years ahead. Even after taking a beating, the stock is trading at about 66 times trailing earnings. At a multiple this high, Regeneron needs to convince the market it can continue producing double-digit growth for many years to come. If investors get a whiff of doubt, the recent stock plunge will seem minor in comparison.

At just 16 times trailing earnings, the market is expecting far less growth from Amgen than the average company in the S&P 500. Biosimilar competition for its best selling drugs are coming, but 28% of its market cap is in cash and equivalents. Even if it treads water for a few years, it's still a stock I wouldn't mind holding in my portfolio. 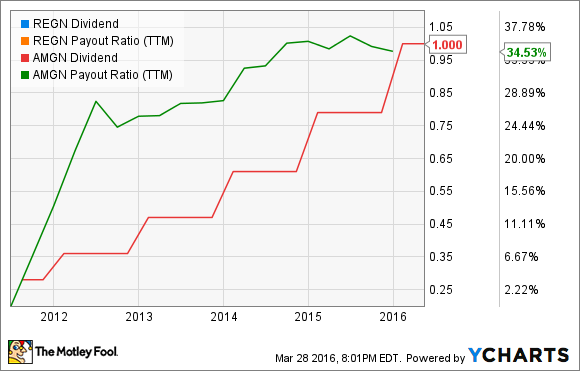 One of its more endearing qualities is a juicy 2.7% yield. Over the past few years it's raised the dividend at a rate of nearly 30% annually, and with a payout ratio of just 34.5% there's plenty of runway to continue increasing it even if its top line stagnates for several years.

I'll admit Amgen can't offer the type of growth that Regeneron might, but I'm getting too old to take on that level of risk. A fast-paced dividend and lots of free cash flow make Amgen the better buy.