Please ensure Javascript is enabled for purposes of website accessibility
Log In Help Join The Motley Fool
Free Article Join Over 1 Million Premium Members And Get More In-Depth Stock Guidance and Research
By Timothy Green - Apr 4, 2016 at 9:09AM

Big Blue continues the long process of reinventing itself. Here are three charts that fill in the details.

Shares of International Business Machines (IBM 0.44%) have started to come back to life, rebounding strongly from a multiyear low reached in February. The company is still in the middle of transforming itself, shifting toward areas like business analytics and cloud computing, and its financial results have been largely negative for quite some time. Pessimism may not be as high as it was a few months ago, but IBM is still not a very well-liked stock. 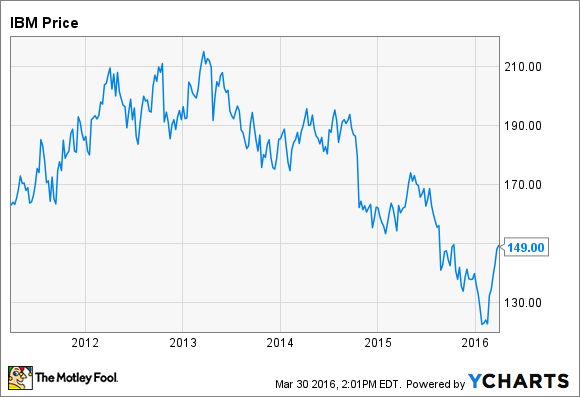 To better understand what's going on at IBM, here are three charts that investors need to see.

About those revenue declines
IBM has reported year-over-year revenue declines for 15 consecutive quarters. In 2015, revenue of $81.7 billion was down a whopping 23.6% compared to 2011. These numbers paint a pretty dire picture, and investors have sent shares of IBM tumbling over the past few years, largely due to these revenue declines. But the headline numbers don't tell the whole story. 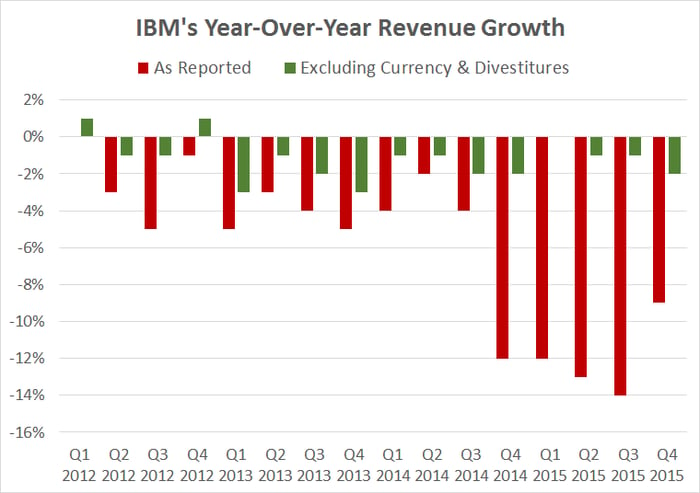 The past year and a half has been particularly rough for IBM, with double-digit revenue declines becoming the norm. But much of these declines have had little to do with the business itself. Instead, divestitures of underperforming businesses, like the x86 server business, and a strengthening U.S. dollar, have ravaged IBM's revenue. Adjusted for these items, revenue declines have ranged from 0% to 3%. That's still not great, but it's a far cry from double-digit declines.

Going forward, IBM expects currency to continue to have a negative effect throughout 2016. Profits are expected to take an even bigger hit compared to 2015, with IBM guiding for a $1.3 billion impact on pre-tax profits, due to both translation effects and the roll-off of hedges. The good news is that this is mostly just noise, albeit substantial noise, and eventually these currency issues will subside.

The long-term strategy
IBM has been shifting resources away from legacy businesses toward high-growth, high-value businesses -- what it calls strategic imperatives. These include cloud, analytics, mobile, social, and security, and they're the cornerstone of IBM's long-term strategy. Overall, IBM's adjusted revenue is declining slightly, but internally, the strategic imperatives are exploding. 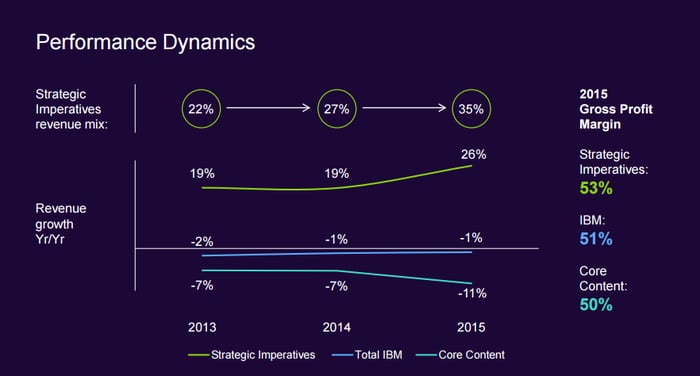 The growing contribution from the strategic imperatives opens up a path to profit growth, since gross margins are higher in these fast-growing businesses compared to the rest of the company. The strategic imperatives are more software heavy than the company as a whole, and with software being the most profitable part of IBM, there's the potential for profits to grow faster than revenue in the long run.

Impressive cloud growth
In 2015, IBM reported $10.2 billion of cloud revenue, up 57% on an adjusted basis. This number isn't directly comparable to those of other cloud infrastructure providers like Amazon and Microsoft, because IBM's cloud revenue includes hardware, software, and services. A more comparable number is IBM's cloud delivered as a service annual run rate, which reached $5.3 billion at the end of 2015. 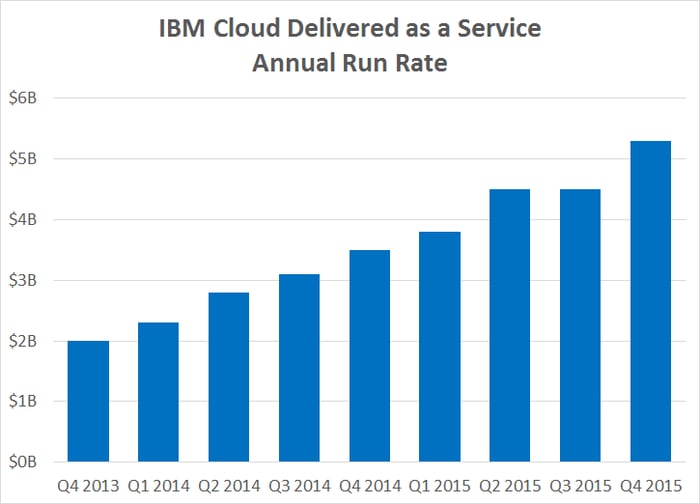 This as-a-service number includes SoftLayer, IBM's infrastructure-as-a-service offering, Bluemix, the company's platform-as-a-service, and all of the software that IBM now sells and delivers through the cloud. Amazon currently dominates the market for infrastructure-as-a service, and Microsoft is a strong no. 2, but IBM's strategy doesn't involve being the biggest cloud infrastructure provider. As CEO Virginia Rometty said at a conference last year, "What's important is that we grow in the right areas. Tech is littered with areas that you can have high growth and make no money. That's not us."

IBM's cloud strategy involves offering high-value solutions, like its Watson cognitive computing system, which is being used in industries ranging from finance to healthcare. One could argue that IBM was late to the cloud game, allowing its rivals to build up big leads. But IBM is focusing on areas where it can build and maintain competitive advantages, and while the company's transformation is proving to be a long process, the cloud growth speaks for itself.