A promising earnings report and outlook pushed the bookseller's stock higher in March.

What: Shares of Barnes & Noble (BKS) were moving to the next level last month, finishing up 27%, according to data from S&P Global Market Intelligence.

A strong earnings report at the beginning of the month helped propel the stock higher, as the chart below shows. 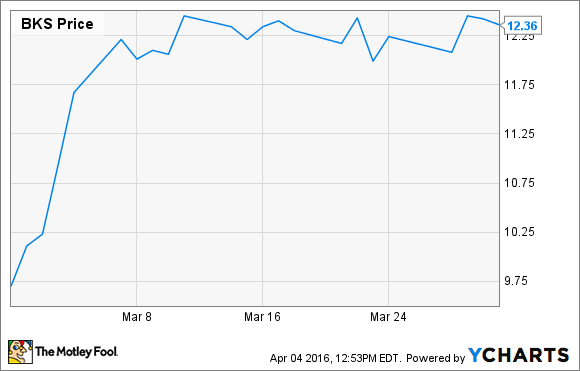 So what: The bookstore chain's stock entered the month with momentum, having gained 11% in February and soared in the first week as its earnings report showed the company's business stabilizing. Management said it would only close six stores in fiscal 2016, the lowest number since 2000, and reported a same-store sales increase of 1.3%, excluding its Nook division. Those figures show the retail business looks stronger than it's been at any time since the recession, and the company plans to open four "prototype" stores this year, its first new store openings in more than two years. Details about the new stores are scarce.

Barnes & Noble per-share profit over the holiday quarter also improved from $0.96 to $1.04, and the company forecast core comparable sales growth of 1% for fiscal 2016.

Now what: With the company finding modest growth in its retail business and Amazon.com opening flagship bookstores in Seattle and San Diego, it's becoming clear that the bookstore is not disappearing as many thought it would just a few years ago. Ironically, B&N's greatest problem is the Nook division, which looked like its savior not too long ago.

With persistent pressure from Amazon, the bookseller's comeback is far from guaranteed, but the company seems to be taking the right steps for long-term stability and viability. The success of its prototype stores should go a long way toward determining the stock's future prospects.