What: Shares of Starwood Hotels & Resorts Worldwide (NYSE: HOT) jumped 21% last month, according to data from S&P Global Market Intelligence. The owner of properties such as the W Hotel spiked on a bidding war between Marriott International (MAR 1.96%) and Chinese insurance firm Anbang. As you can see from the chart below, the battle intensified in the middle of the month. 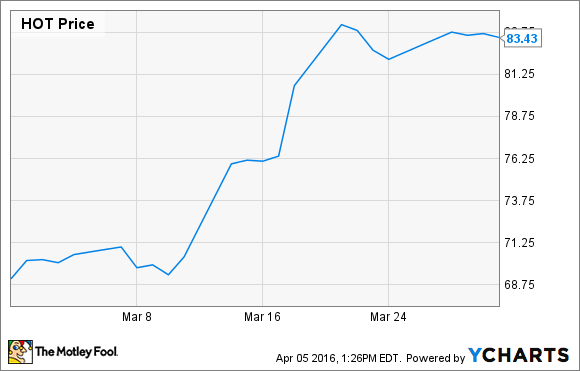 So what: Starwood had agreed to sell itself to Marriott late last year, creating the world's largest hotel chain, but Anbang jumped into the mix on March 14, sending the stock upward. The mysterious Chinese insurance company -- which, in separate deals, recently acquired New York's Waldorf Astoria, and a portfolio of luxury hotels previously owned by Blackstone Group -- offered $76 a share for Starwood, about 2% better than Marriott's offer at the time. This pushed Starwood's stock up 8%. Marriott's offer was tied to its own stock price, which fell after Anbang made its all-cash proposal, rendering the Anbang offer even more appealing. Starwood said at the end of that week that it planned to accept Anbang's offer, which had been raised to $78 a share, but Marriott swept in with a counter on March 21 of $13.6 billion, worth $79.53 a share.

Now what: Shares of the Sheraton-parent spiked as high as $84 on that news as investors anticipated another bid from Anbang. It came the following week; the insurer offered $14 billion for Starwood, but pulled the bid without explanation after the market closed on March 31. Starwood's stock promptly fell 5% on April 1, and should continue to trade in tandem with Marriott's, as the hotelier's offer is closely tied to the value of its own stock.  The next step will be for shareholders to vote on the new buyout offer. Both  chains will hold shareholder meetings on April 8 for that purpose.