Given its exploration focus, this gold stock’s outperformance is likely to continue. 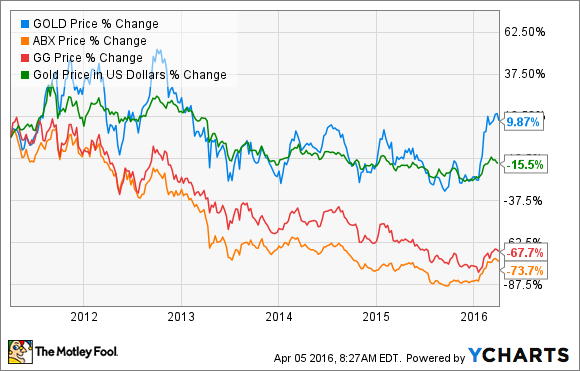 It has done so because of two things: its exploration focus and avoidance of debt. As long as it can continue down this same path, it should be able to continue to swim against the tide and keep outperforming. 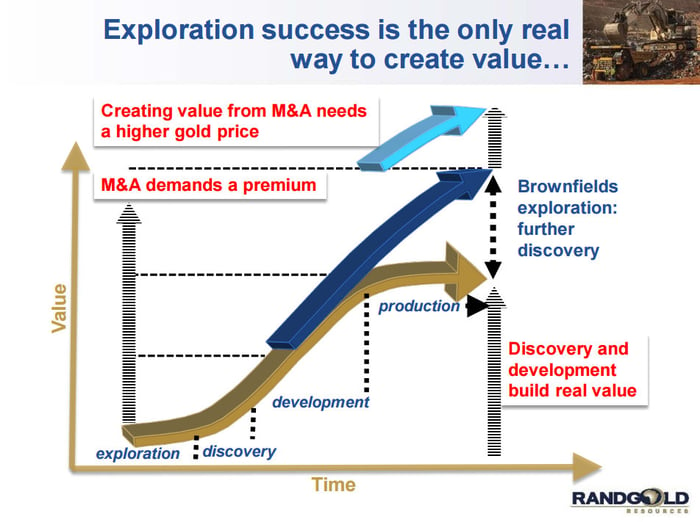 As that slide notes, it thinks exploration wins out over M&A because it can deliver value at a lower gold price, given that it doesn't require the premium that M&A does. That's largely due to the fact that acquisitions are based on a premium to the value already created as well as value expected to be created in the future. In other words, sellers want to be paid handsomely for the work they've already done to get the value creation ball rolling.

The problem with that is that it then increases the cost of producing gold in the future because this acquisition premium needs to be factored into the equation. That leads to thinner profit margins when gold prices weaken.

Furthermore, by focusing on exploration, Randgold has also avoided another problem that's plagued its larger peers: massive impairment charges. Barrick Gold, for example, recorded more than $3 billion in impairment charges last year, of which roughly $1.8 billion was the writedown of goodwill. That implies that the company vastly overpaid for prior acquisitions given that goodwill is recorded as the result of the premium paid for an acquisition's intangible assets.

Operating a cash business
Along that same vein, M&A often requires a lot of debt, which has proven to be problematic for its peers when gold prices fall. Randgold has completely avoided debt, operating in a net cash position, while rivals Goldcorp and Barrick Gold have been weighed down with billions in debt: 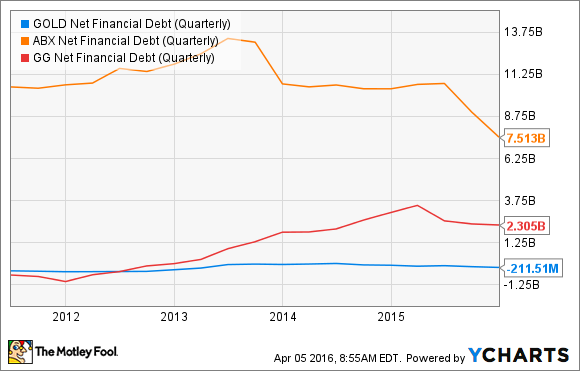 This debt is costly for two reasons. First, is the obvious interest payments that sop up precious cash flow when gold prices weaken. The other issue is the fact that if gold falls too far, it can diminish a producer's cash flow to the point where its financial flexibility is compromised. This could cause them to start selling assets in order to increase their flexibility.

Barrick Gold, for example, has been selling off some of its gold mines in order to whittle down its debt. Under the pressure of a whopping $12.9 million in total debt, it pledged last year to sell at least $3 billion in assets to help alleviate some of that pressure. In a few short months, it was able to sign $3.2 billion in asset sales, joint ventures, and partnerships, which helped it increase its financial flexibility while turning its focus on mines that were driving free cash flow. Goldcorp, likewise, has engaged in a number of non-core asset sales in recent years in order to bolster its financial flexibility. Last year, for example, Goldcorp sold $890 million in assets to help bolster its liquidity position, which was much needed after its free cash flow of $335 million didn't even cover its dividend outlay of $370 million.

Investor takeaway
Randgold's focus on exploration over acquisitions while also avoiding debt has paid off handsomely in the past, enabling it to create value for investors at a time when its peers have obliterated value. That puts it in a much better position to continue to create value in the future even if gold prices remain weak. In other words, this gold stock should swim even if gold prices remain low.