Please ensure Javascript is enabled for purposes of website accessibility
Log In Help Join The Motley Fool
Free Article Join Over 1 Million Premium Members And Get More In-Depth Stock Guidance and Research
By Matthew DiLallo - Apr 7, 2016 at 10:15AM

The oil and gas company took investors on a wild ride despite not having a shred of news last month.

What: To say March was a wild month for California Resources' (CRC) stock would be an understatement: 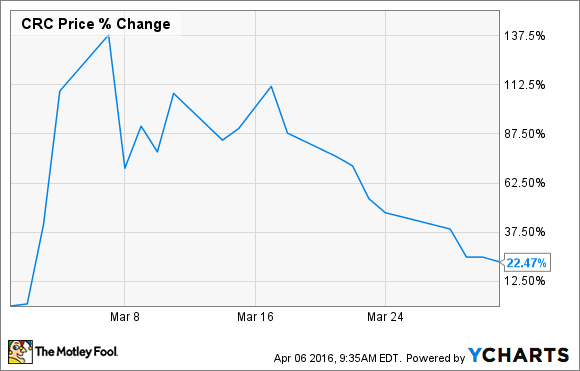 As that chart shows, the stock skyrocketed to start the month, doubling within a few days. That rally, however, would soon fade because the fuel driving it, mainly short covering, wasn't sustainable.

So what: There was not one lick of company-specific news even remotely relating to California Resources last month. No company press releases, no analyst reports, not even a bullish buy by a well-known investor. Instead, what fueled last month's move was an oil price-inspired short squeeze.

In fact, crude oil enjoyed its best month in nearly a year, rallying 14% in March on news that OPEC and Russia were making progress on a production freeze. That initial news halted crude's slide in February, with that rally carrying through into March.

It also made short-sellers nervous that OPEC might do something more than just freeze its production in order to boost oil prices. Such a move could cause crude oil to surge, potentially obliterating all the profit they made on the way down shorting weaker oil stocks. That caused a heavy buying spree as short-sellers ran to exit their positions. In fact, from Feb. 15 to March 15, short-sellers in California Resources bought to cover over 1 million shares to close their short bets, sending it screaming higher in a matter of days.

While all that buying created a huge initial spike in the company's stock, that uptick didn't last because nothing fundamental changed last month. In fact, the OPEC/Russia production freeze was rumored to be falling apart by the end of the month while California Resources still had a mountain of debt that needed to be addressed. That's why the stock gave back a large portion of its gains by the end of the month.

Now what: California Resources needs two things to happen in order to put itself into a much more sustainable position. First, oil needs to rise to a much more meaningful level and stabilize so that the company can have a bit more certainty on future cash flow. Second, it needs to make even more progress on debt reduction by either making another debt exchange or selling assets to pay down debt. Until both of these things happen, this stock will continue to be very volatile because the risk is real that low oil prices and too much debt could still be its undoing, which is what short-sellers had been betting on.