Please ensure Javascript is enabled for purposes of website accessibility
Log In Help Join The Motley Fool
Free Article Join Over 1 Million Premium Members And Get More In-Depth Stock Guidance and Research
By Daniel Sparks - Apr 7, 2016 at 11:40AM

After racking up 325,000 reservations, the electric-car maker is upping its production plans for the important vehicle.

It was no secret that electric-car maker Tesla Motors (TSLA 7.33%) had big aspirations for its $35,000 Model 3. With a starting price at half of its Model S, the young automaker was betting the new vehicle would help Tesla significantly boost its vehicle sales in the coming year. But the initial reception to the vehicle's unveiling was more than management -- or anyone, for that matter -- expected. This has management looking to ways to give its Model 3 production plans a boost. 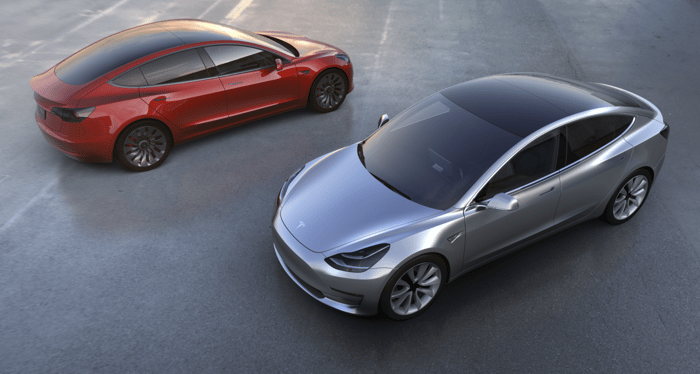 The biggest product launch ever
One week ago, Tesla began accepting deposit-backed reservations for its Model 3. It was clear right away that there was a good chance we had all underestimated the pent-up demand for the vehicle.

Lines at Tesla stores had hundreds of customers. One line I visited in Colorado had around 500 people in it before the store opened. Most surprising of all, these customers were waiting in line without even having seen the vehicle yet; the company wasn't scheduled to unveil the vehicle until later than night.

On Thursday morning, Tesla has updated investors with how many Model 3 reservations it garnered during the first week: Over 325,000.

This translates to "about $14 billion in implied future sales," Tesla noted in its blog post about the important milestone, "making this the single biggest one-week launch of any product ever."

The company's calculation to arrive at "about $14 billion in implied future sales," multiplies total reservations by the company's estimated average transaction price for Model 3 of $42,000.

To conclude the vehicle is the biggest product launch ever, the company is likely comparing the Model 3 launch to Apple's product launches in new categories, e.g. the iPod, iPhone, iPad, or Apple Watch.

Tesla is particularly proud of the demand it was able to generate without any advertising.

Unlike other major product launches, we haven't advertised or paid for any endorsements. Instead, this has been a true grassroots effort driven by the passion of the Tesla team that's worked so hard to get to this point and our current and future customers who believe so strongly in what we are trying to achieve.

No doubt, the initial demand demonstrated by Model 3 reservations highlights the interest in fully electric vehicles when they are compelling alternatives to their comparably priced gas-powered alternatives. Model 3 is arguably the first fully electric vehicle with a reasonable price tag that also sports meaningful range and comparable -- or even superior -- performance and specs than similarly priced vehicles.

Setting higher production goals
In response to the optimistic market reaction to Tesla's Model 3, the company is looking to boost its production plans.

"We would write more, but we need to get back to increasing our Model 3 production plans!" Tesla said as it wrapped up the short blog post detailing the important milestone.

This year, Tesla plans to deliver 80,000 to 90,000 Model S and Model X combined. While this represents significant growth compared to the company's approximately 50,600 deliveries in 2015, it's still far behind its aspiration deliver 500,000 vehicles per year by 2020 -- a feat the company will rely heavily on demand for its Model 3 to achieve.