Please ensure Javascript is enabled for purposes of website accessibility
Log In Help Join The Motley Fool
Free Article Join Over 1 Million Premium Members And Get More In-Depth Stock Guidance and Research
By Brian Feroldi - Apr 8, 2016 at 8:04AM

When your lead compound gets the thumbs up from a panel of experts, good things tend to happen.

What: Shares of Acadia Pharmaceuticals (ACAD 1.66%), a biopharma focused on diseases of the central nervous system, soared 46% higher during the month of March, according to data from S&P Global Market Intelligence. 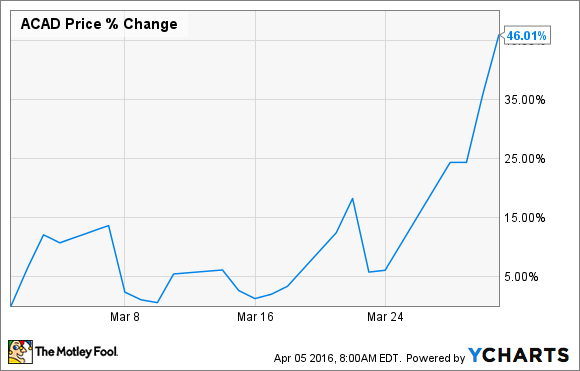 So what: The huge surge was caused by news that the FDA's advisory committee of outside experts voted in favor of giving Nuplazid the green light by a 12 to 2 margin. The committee stated that they believed the potential benefits of using Nuplazid as a treatment for Parkinson's disease psychosis outweighed the compound's potential risks.

The news was so huge that trading on the company's stock was temporarily halted. When it resumed, shares immediately jumped more than 21% in a single day. Shares have even continued to rally into April as investors digested the news.

Now what: Even though Acadia's stock was able to roar higher during the month, it still hasn't fully recovered from the drubbing that it took to start the year. Just like the iShares Nasdaq Biotechnology ETF, shares plunged when the calendar turned to January 1st. 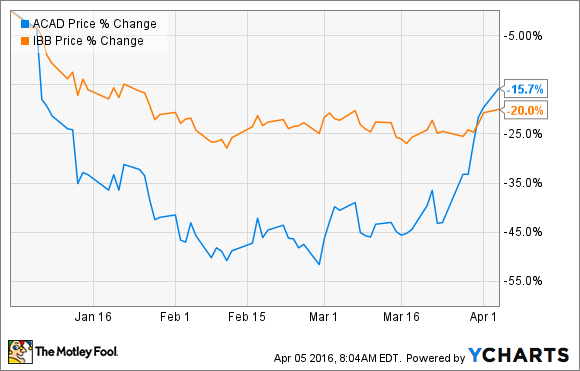 That large drop is likely owed to the fact that short interest in the company jumped from 13 million shares on December 31st to more than 17 million by mid-March. These traders seem to believe that regulators would reject Nuplazid since its clinical data wasn't perfect. When news broke that the panel of FDA advisers had recommended the drug's approval, many short-sellers were forced to cover at the same time, creating a short squeeze which sent shares screaming higher.

The next catalyst that investors can look forward to is Nuplazid's PDUFA date which is scheduled for May 1. While the FDA is not obligated to follow the recommendation of its external panel of experts, more often than not it does.

With analysts predicting peak sales as high as $3 billion for Nuplazid, even after March's monster move there still could be plenty of room left for Acadia's stock to run -- assuming, of course, that everything goes according to plan.