Please ensure Javascript is enabled for purposes of website accessibility
Log In Help Join The Motley Fool
Free Article Join Over 1 Million Premium Members And Get More In-Depth Stock Guidance and Research
By Daniel B. Kline - Apr 8, 2016 at 4:47PM

The company continues to benefit from a strong Q4 and full-year earnings report.

A strong fourth quarter where the company met its stated growth goals has caused Nordstrom (JWN 1.76%) stock to move steadily higher since it reported earnings on Feb. 18.

What: Sometimes simply doing what it says it will do can bring a company the market's confidence. In this case, Nordstrom reported fourth-quarter net sales growth of 5.2% and same-store sales growth of 1%, both of which were in line with its projections. The retailer also reported a full-year net sales increase of 7.5%, along with a comparable stores sales increase of 2.7%, in line with the company's outlook of 2.5% to 3%.

That was enough to send its shares on a steady climb that continued throughout March. Nordstrom shares closed on Feb. 29 at $51.32 but finished March at $57.21, an 11.5% jump, according to data provided by S&P Global Market Intelligence. 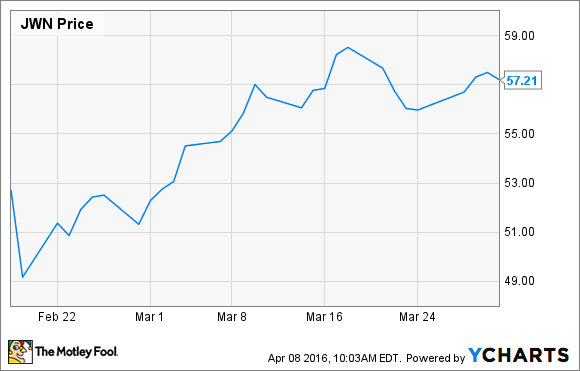 So what: Nordstrom had set multiple goals heading into the year and it made good progress on them. This included gaining market share in both its full-price and off-price businesses, grown its Nordstromrack.com/HauteLook brands by approximately 50%, and opening a third fulfillment center in Elizabethtown, Pennsylvania, located within two-day delivery of approximately half the population in the United States.

The company also opened its first international flagship store in Vancouver, B.C., and returned $2.4 billion to shareholders through share repurchase and dividends.

Now what: The high-end retail chain has changed its strategies to better match the market. Going forward it has plans to continue to reduce operating expenses and capital expenditures. But it will not be sitting still, as the company plans to open a number of new stores this year. These include three new full-line stores, 20 new Nordstrom Rack stores, one full-line store relocation, and two Nordstrom Rack store relocations.

Because of these moves the company expects full-year 2016 net sales to increase by 3.5% to 5.5%, while it has more modest goals of 0%-2% same-store sales gains.

All things considered, the past year showed that the company could adapt its model to savvier shoppers, heavier online competition, and increasing pressure from rival retailers.