The company has been posting some encouraging fundamentals, but other aspects of its operations aren't so impressive.

Select Income REIT (NYSE: SIR) has a somewhat atypical portfolio and a very tempting dividend yield (10% as of this writing). And the latter follows a sustained period of share price appreciation, which says something about how generously the company pays out.

An intriguing lineup of real estate and a generous dividend are not the only considerations when investors size up a REIT, however. There are several concerns with Select Income REIT that mitigate these factors. Let's see if they indicate whether the company's shares will surge over time or keep bobbing along on the surface.

Wide selection
Select Income REIT is a commercial real-estate investment trust that has a notable presence in the Hawaiian market, which is not typically an area of concentration for REITs. All told, it controls nearly 18 million square feet of space in the state, and most of its 11 properties there are fully let.

The company has plenty of assets in the Lower 48, from California to Massachusetts, but these are fairly scattered. In total, at the end of 2015 Select Income held 119 properties across America totaling just under 44 million rentable square feet. Occupancy at many of these is full; all told, at the end of last year, the REIT's overall occupancy rate was just shy of 98%.

Properties stuffed with tenants are good for the finances. For its fiscal 2015, the company's funds from operations -- the most important profitability metric for REITs -- came in at $197 million (or $250 million on a "normalized," i.e. adjusted, basis) on total revenue of $428 million.

Zooming in on the most recent quarter, normalized FFO of almost $68 million comfortably exceeded analyst expectations.

An unloved manager
That quarterly result has helped lift Select Income REIT's stock price, which was quite some time in coming. Over the one-year period prior to that, the stock had dropped by nearly 24%. That 12-month stretch wasn't particularly kind to equity REITs, but Select Income REIT had one perceived negative factor in particular dragging it down: its external management company (and major shareholder), The RMR Group (RMR -0.78%).

Once upon a time, The RMR Group managed CommonWealth REIT. This was a larger REIT from which Select Income REIT was spun out of, in addition to self-descriptive specialty REITs Government Properties Income Trust, Hospitality Properties Trust, and Senior Housing Properties.

Following a rebellion by a pair of activist investors in CommonWealth REIT, The RMR Group ultimately lost its position as manager of the company (which has since been renamed Equity Commonwealth). But it retained that job in Select Income REIT and its fellow spinoffs, in addition to managing a clutch of other REITs and real-estate-related companies.

That's a concern for many investors. First, an external manager is expensive. Second, in Select Income REIT's case, its management fee is based on assets, so the more property it holds, the higher the fee it pays. That, of course, incentivizes the manager to load up on assets; the potential conflict of interest is obvious.

Third, The RMR Group has a habit of funding the investments of the REITs it manages by paying for them with shares, meaning that it frequently creates new stock for its companies. The problem, of course, is dilution: With each fresh stock issue, the value of an existing share falls.

The amounts are concerning. Here's a look at how shares outstanding have risen for Select Income REIT and how this has affected the company's FFO per share. Share count has risen steeply, while trailing 12-month FFO per share has dived by almost 43%. 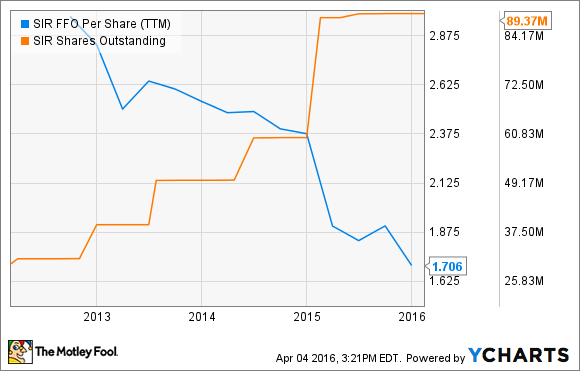 For the most part the other REITs managed by The RMR Group have maintained per-share FFO a bit better, but all could have seen much more meaningful growth if it weren't for share count inflation. This is clearly a go-to strategy for their manager, and it's worrying.

Better sources of income
It's usually hard to argue against success, but not in this case. Select Income REIT's occupancy numbers are admirable, particularly considering the dispersion of the company's assets. The RMR Group clearly knows how to pick properties and fill them with good tenants.

The very big catch is that for years it has funded this strategy by essentially making shareholders pay for it. If it keeps that up -- and there's no reason to think it won't -- when the REIT has a down quarter or several, that FFO number really has the potential to plunge. That's overly risky to me, particularly considering the wealth of other good equity REITs that do perfectly well keeping management in-house.

All that considered, I'd say Select Income REIT has a better chance of sinking than swimming in the coming years.