Alcoa (NYSE: AA) reported earnings of zero cents a share in the first quarter of 2016. Take out one-time items, however, and the bottom line was actually $0.07 a share, above the $0.02 a share that analysts had been expecting. Revenue, meanwhile, was $4.9 billion, notably below the roughly $5.1 billion analysts had been calling for. There was a lot going on in these numbers, not to mention beyond them. Here's a deeper dive.

A new name
One of the biggest pieces of news from the quarter was that Alcoa's Value Add business, which makes specialty parts, finally got a name: Arconic. The upstream business, which makes aluminum, will retain the Alcoa name. For now, Alcoa is attaching the word "new" to Alcoa to distinguish between Alcoa today and the spinoff.

The broad top-line decline was largely due to falling commodity prices. In fact, organic growth and acquisitions added nearly 6% to the top line, but a more than 20% decline in aluminum prices left the top line 15% lower year over year. The impact was felt on both sides of the business, with Arconic's revenue down about 2% because of metals pricing that more than offset a roughly 6.5% increase in revenue because of acquisitions.

The new Alcoa business, meanwhile, took exactly the kind of hit you'd expect when the commodities it sells fell 19% since the start of the year. Add in revenue lost from closed operations and it's pretty clear that new Alcoa is still in retrench mode. But to the company's credit, the division generated positive after-tax operating income. So, despite the rough market, all of the cost-cutting and asset sales appear to be pushing the division in the right direction.

More good news?
That's really the good news here. Alcoa is facing a harsh market as it gets closer to breaking apart, but it's holding up relatively well. On the new Alcoa side, the company is closing or selling noncore assets, which is freeing up capital for debt reduction. But these moves are also rightsizing the business to the current market.

This isn't just about shrinking, though: It's about doing the right things for new Alcoa's future. For example, the company won a $350 million bauxite supply contract in the quarter. And its Ma'aden-Alcoa joint venture refinery is operating at 80 percent of its expected capacity. So there's business growth that's being hidden by the rightsizing actions.

On the Arconic side of things, the news is much brighter. CEO Klaus Kleinfeld summed it up: "Profits grew in all of the Arconic segments, led by automotive and aerospace." This division got a supply agreement for 3D-printed titanium fuselage and engine pylon parts and signed a $1 billion multiyear contract to deliver advanced industrial gas turbine components, the largest such deal that Alcoa has inked so far. So, really, both businesses are doing pretty well despite the tough conditions. 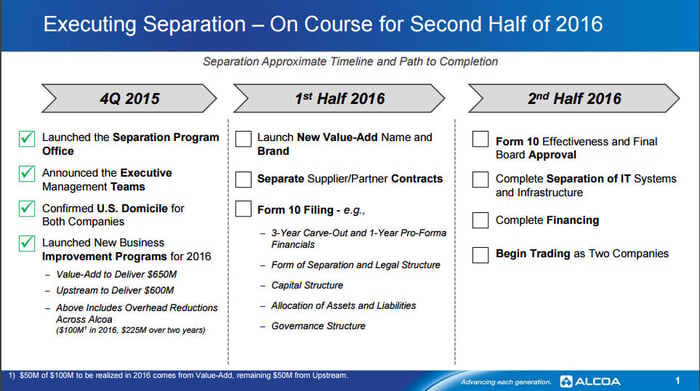 Moving toward the breakup
That said, the big news remains the company's pending breakup. That's still expected to take place later this year. Alcoa, however, is looking to provide more regulatory information on the pending separation before the end of the second quarter. So investors should keep their eyes open for that update.

The big question you'll want to answer if you are watching or own Alcoa today is what piece do you want to own. Despite weak commodity prices and a slowdown in some key markets, Arconic continues to post impressive business results. This is going to be a more growth-oriented business offering high-tech products for which Arconic can charge more money than it would for commodity items. On the surface, that sounds like the best bit of the company.

However, some would argue that investors are pricing the company based only on the Arconic business. Which means that new Alcoa, which will remain highly dependent on commodity prices, is almost a free add-on to the deal. And while it looks like it's in a tough spot today, Alcoa has been working hard to rightsize the business as much as it can before the split. So when the de-merger is consummated, new Alcoa should be in pretty good shape operationally. It could be the dark horse in this race, particularly since Alcoa still sees the world consuming more aluminum than it produces.

In the end, the first quarter provided a mixed picture of Alcoa and its separated future. The aluminum market is still tough, and that's certainly hurting the company. But beyond that, there are a lot of positives taking shape as Alcoa moves toward its future as two independent companies. You'll want to keep watching for more updates on the breakup, however, because there are still a lot of moving parts.