Find out why Kinder Morgan's share price collapse can serve as a warning to dividend investors. More importantly, learn why you should avoid it and choose these superior alternatives.

Dividend growth investing has been shown to be the best long-term strategy to grow wealth over time. However, thanks to the worst oil crash in over 50 years, many energy dividend stocks have ended up doing very poorly. 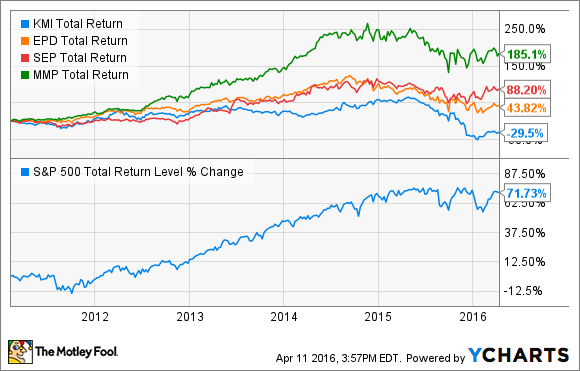 Kinder Morgan (KMI 1.31%) has not only underperformed the overall market over the past five years, but even when dividend reinvestment is factored in (total returns) it's actually lost investors money. Yet competitors such as Enterprise Products Partners (EPD 1.07%), Spectra Energy Partners (SEP), and Magellan Midstream Partners (MMP 0.88%) have done much better.

The reason for Kinder's poor performance over the past half-decade can teach investors a vital lesson needed to avoid a similar fate. More importantly, it illustrates why Enterprise, Spectra, and Magellan will probably continue to be superior dividend growth investments over the coming years.

What went wrong at Kinder Morgan
There's nothing inherently wrong with Kinder Morgan's assets. In fact, they generated $4.7 billion in distributable cash flow in 2015 and are expected to generate $4.9 billion of DCF this year.

Kinder's problem was management's focus on excessive dividend growth at the expense of retaining enough cash flow to decrease reliance on external capital markets for growth.

Until the end of 2015, Kinder was able to continue borrowing debt cheaply, but eventually its balance sheet became so overleveraged that rating agencies threatened to cut its rating to "junk." Doing so would've made future borrowing and refinancing costs for $43.2 billion in debt skyrocket.

Kinder was then forced to finally do what Enterprise, Spectra, and Magellan had been doing all along; become more conservative with its approach to debt, and rely more on its internally generated cash flow to fund growth. For investors this meant a brutal 80% dividend cut, which the market had been anticipating for months and caused the share price to collapse.

The most important lesson dividend investors need to learn

For a little comparison here, this table shows Kinder's yield and 2015 coverage ratio had it maintained its dividend.

Kinder's maximum $0.51-per-share quarterly dividend was simply not sustainable, given the low coverage and lack of ongoing access to sufficiently cheap capital markets. Had management chosen to maintain this payout in 2016, even this year's projected 4.3% increase in cash flow would have resulted in a DCR of 1.08 and probably a credit downgrade that could have permanently hurt future dividend growth.

It was also a result of their more conservative managements, which, understanding the inherent cycle nature of energy prices, wisely chose to focus on two other vitally important metrics over the years that make up the cornerstone of long-term distribution sustainability.

Kinder Morgan's years of reliance on external capital not only resulted in a highly leveraged balance sheet that was the primary reason for the dividend cut, but it also hurt the company's long-term ability to grow shareholder value.

That's because it reduced the company's return on invested capital below its cost of capital, meaning that while new projects coming online will increase cash flow, they might not generate capital long term.

In an industry that's continually raising outside capital, it can be hard to know whether a company or MLP is really growing profitably or just using new capital to grow cash flows at any price.

That's why net ROIC is one metric you should keep a close eye on. Understand that net ROIC isn't a perfect metric for judging profitability because it relies partly on share volatility, which doesn't directly affect the returns on projects. In addition net income doesn't show an asset's cash flow generating potential, which is something investors should care about since it's what funds the quarterly payouts. However, as a rule of thumb it's a good way to ensure that management's using investor money wisely.

Bottom line
Yield and dividend growth are often the first two things income investors focus on. Yet payout sustainability is the most important factor. That's the reason all dividend investors need to pay attention to the three pillars of long-term dividend sustainability: coverage ratio, a strong balance sheet, and returns on capital in excess of its cost of capital.