Please ensure Javascript is enabled for purposes of website accessibility
Log In Help Join The Motley Fool
Free Article Join Over 1 Million Premium Members And Get More In-Depth Stock Guidance and Research
By Selena Maranjian, Dan Caplinger, and Brian Feroldi - Apr 16, 2016 at 8:46AM

There are some things you can do to decrease your chances of being audited even further. Learn about them, so you can avoid doing them.

If you're desperately hoping to avoid having to undergo a tax audit, take heart -- the odds are in your favor. Relatively few tax returns get audited. Even better, there are some things you can do to decrease your chances of being audited even further. Below are three things the IRS could audit you for doing -- so try not to do them.

Brian Feroldi: One big red flag that trips up a lot of filers is that they fail to report all of their income to the government. The IRS will know that this happens since any institution that issues you an income -- an employer, a broker, the Social Security administration -- will directly notify the IRS about how much they paid out to you. Thus, if you forget to include one of these income sources on your filing, your reported income won't line up with what the IRS is expecting, causing your return to be flagged and greatly increasing your chance of being audited.

Tax payers should pay particular attention to any Form 1099s they receive since they can come from a variety of sources. Did you get paid dividends from owning a stock? Take a distribution from an annuity? Have any debt forgiven? Any transaction, big or small, will likely generate a 1099 that is automatically reported to the IRS -- and it's all too easy to forget to include them all on your return. That's especially true if the issuer of the 1099 accidentally sends the form to one of your former addresses.

For that reason, filers need to be diligent about collecting all of their paperwork and should pay particular attention to any 1099 forms that need to come their way. 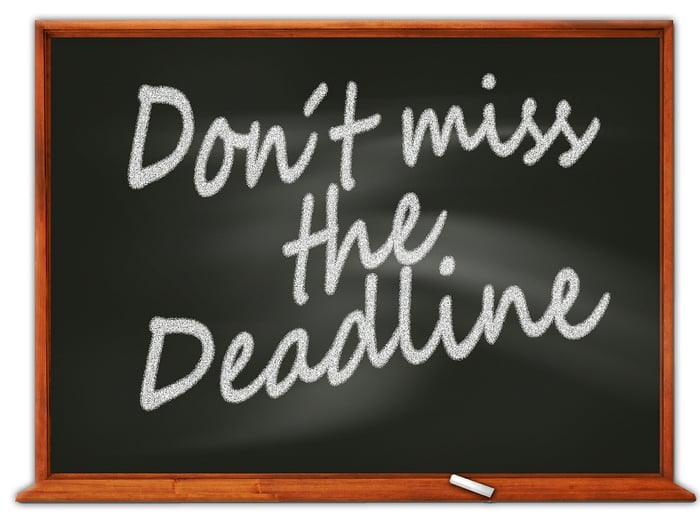 Don't fail to file your tax return by the deadline. Image source: Pixabay

Dan Caplinger: One mistake many people make around the tax deadline is thinking that if they can't afford to pay their tax bill, they just shouldn't file at all. Their rationale is that filing a return puts the fact that you didn't pay on the IRS's radar, and it's easier to hope the IRS just won't notice if you don't file.

However, nothing could be further from the truth. As Brian mentioned, the IRS receives W-2s, 1099s, and other tax forms from employers and financial institutions that have details on your taxable income. IRS computers are waiting for your return in order to crosscheck those figures and make sure they match up. Even if you don't file a return, the IRS has enough information to know that you should have filed.

Moreover, the penalties for not filing a return are huge compared to those for not paying your bill. For every month or portion of a month you're late in filing, you'll owe a penalty of 5% of your unpaid taxes. That compares to just half a percent per month if you file but aren't able to pay on time.

So, don't think you can escape the notice of the IRS by not filing. Go ahead and get your return ready -- or at least file for an extension -- and avoid the nasty consequences of failing to file.

Selena Maranjian: One way to catch the attention of the IRS and possibly set yourself up for an audit is to be a bit extreme in your return. You might, for example, deduct much more in charitable contributions than others with similar financial profiles. Alternatively, your business expense deductions might be significantly higher than others with similar and similar-sized businesses. (Those might include business travel, meals, entertainment, and home office deductions.) The IRS also watches out for extremes in categories such as medical expenses, debt expenses, and casualty losses.

You see, the IRS processes a lot of tax returns each year and has a lot of information. It knows what typical deductions look like for people at all kinds of income levels. Thus, it knows when certain numbers look fishy.

Here's the good news, though: If your tax return features some outsize numbers, and they do trigger an audit, you'll just have to justify your claims. Have you given much more to charity than others at your income level? Simply have the receipts ready. Have you deducted lots of business travel expenses? Be ready to justify the trips and expenses.