While its credit rating might have been cut to junk, this Canadian oil company is sitting on a boatload of cash.

Canadian oil producer Cenovus Energy (CVE 2.81%) has been hard hit by the downturn in oil prices. Those prices have cut deeply into the company's cash flow, which has forced it to cut deeply into its outflows, slashing its capex, its dividend, and its workforce. Meanwhile, its stock price has been pulverized and is down 65% over the past few years. Clearly, it's not the safest of oil stocks. However, there is one thing that investors can't overlook that really bolsters the company's safety position right now.

So many cuts
After reporting a much steeper-than-expected loss last quarter, Cenovus Energy undertook another round of cuts earlier this year. The dividend, which had already been cut 40% in 2015 was slashed another 69%. Meanwhile, capex, which was cut 59% last year, was sliced by another 27% for 2016 to a range of $1.2 billion to $1.3 billion. Finally, its workforce, which was reduced 24% last year, is currently undergoing another workforce reduction. All this to try to keep the company's head above water amid one of the worst downturns to hit the energy sector in years.

Despite making significant spending reductions, Cenovus Energy still had its credit rating downgraded below investment grade. In cutting its credit rating to junk the credit rating agency cited its belief that Cenovus Energy would see a "material decline in its cash flow and significantly weakened leverage and interest coverage metrics in the current oil price environment in which its cost of production is above its realized prices." In other words, after seeing its cash flow fall 51% last year to just $1.7 billion, the credit rating agency sees an even deeper decline in 2016 because oil and gas prices are currently below the company's cost of production, meaning it's running in the red. That's a big problem for a company that has $4.7 billion in debt to support.

The downgrade of Cenovus Energy's credit from Baa2 to Ba2 is a big change. A Baa2 rating implies that the company has adequate financial capacity to meet its financial commitments, though there's still a risk that it could struggle if economic conditions worsened. On the other hand, a Ba2 rating suggests that the company currently faces major ongoing uncertainties and it might not have the financial capacity to meet its needs if conditions deteriorate any further. It's a credit rating that suggests Cenovus isn't on the safer end of the spectrum.

The safety net
While Cenovus' weakening cash flow has significant potential ramifications given its lofty debt level, the company does have a huge safety net that can't be overlooked. It's sitting on $4.1 billion in cash, which is the largest cash pile in the Canadian energy patch, just ahead of Suncor Energy's (SU 2.60%) $4.05 billion bank account. When that cash is factored into the equation, it gives Cenovus Energy the lowest net debt-to-capitalization ratio in the sector, putting it above even Suncor Energy: 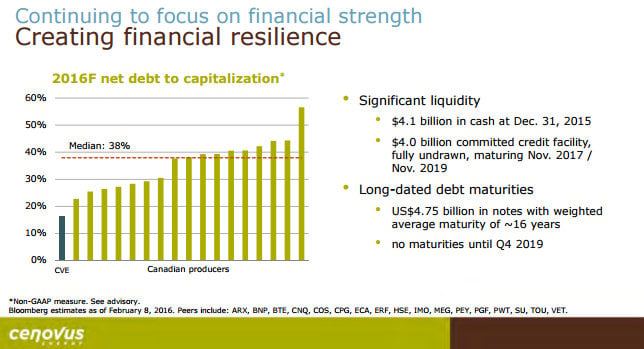 After roughly matching capex with cash flow last year and selling its royalty assets for a pretty penny, Cenovus Energy has been able to build up a huge cash cushion to get it through the teeth of this downturn. Further, with plans to spend just $1.3 billion in 2016, the company has more than enough cash to cover that outlay for a few years even if oil went to zero. So, while its credit rating might have been cut to junk, the company is not in any near-term danger of being unable to pay its bills. Instead, like Suncor Energy it has more than enough cash to continue to invest in its business, and even consider investing in growth projects to position itself for the eventual upturn.

Investor takeaway
Clearly, Cenovus Energy is being challenged by the deep drop in oil prices, which has cut deeply into its cash flow. As such, its's not as safe as a company like Suncor Energy, which has maintained its investment grade credit rating and only experienced a 24.5% drop in cash flow compared to the 51% drop Cenovus endured. Having said that, Cenovus Energy's cash resources put an end to any questions that it won't survive the downturn. So, while it's clearly not as safe as Suncor Energy, which has actually increased its dividend during the downturn, Cenovus isn't anywhere near the bottom either.