Is Merck the right stock to lead your portfolio to riches? These 16 points might suggest so.

The goal of every investor should be to find high-quality stocks that they can hold over the long-term. Of course, with more than 7,000 stocks traded on major U.S. exchanges, finding great stocks to buy and hold isn't always an easy task.

When looking for great companies, we're often after business models that have staying power, offer shareholders incentives (i.e., dividends and/or share repurchases), present with competitive advantages, and remain innovative. This isn't always easy to find, but looking through the healthcare sector, drug giant Merck (MRK 0.30%) might fit the bill.

1. History: One telltale sign of a great business model is its ability to stand the test of time. Merck can trace its history back more than 300 years, with Jacob Friedrick Merck acquiring Angel Pharmacy all the way back in 1668. Things have changed in a big way since then, but today Merck remains one of the largest drug developers in the world.

2. Innovative pipeline: Buying Merck gives investors access to possible game-changing medicines that could improve patients' quality of life, as well as an opportunity to reap the rewards of these innovative medicines. Currently, Merck's pipeline boasts 11 midstage programs, including cancer and diabetes drugs, 25 late-stage development programs, including HIV, multiple myeloma, and roughly a half-dozen cancer types, and five drugs under review by regulatory agencies.

4. Licensing opportunities: Being an industry giant with deep pockets, Merck is also active with licensing and collaboration opportunities. For example, Merck and NewLink Genetics have advanced rVSV-ZEBOV, an Ebola vaccine, into late-stage studies, and appeabe the first drug developers to submit an Ebola vaccine for approval.

5. Product inelasticity: Having products that sell well regardless of how well or poorly the U.S. or global economy is performing is always a positive. Since consumers have no control over when they get sick, or what type of illness they'll contract, Merck's products are likely to remain in constant demand. This helps secure the company's drug pricing power.

7. Dividend yield: Dividends are the foundation upon which great retirement portfolios are often built, and Merck's 3.3% dividend yield can go a long way to boosting your long-term gains. Its yield is about one full percentage point above the average yield of the S&P 500. 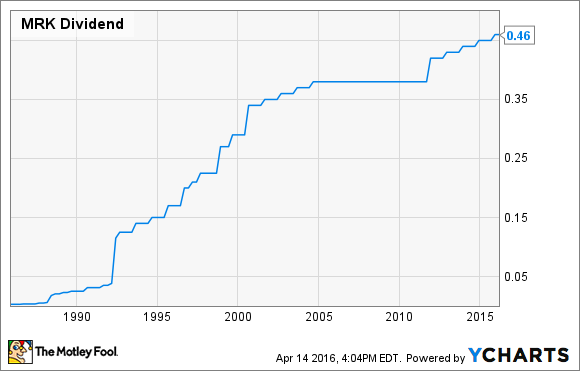 8. Payout ratio: Merck's dividend works out to $1.84 per share per year, yet it's slated to generate a full-year 2016 profit of $3.72 per share according to Wall Street estimates. This works out to an estimated payout ratio of just below 50%. This reasonable payout ratio demonstrates Merck's commitment to rewarding its investors while also signifying that additional dividend growth seems justified.

10. Cost-cutting ability: One way Merck's improved its operating margin is by cutting out some of its overhead. Since 2010, Merck has cut 36,450 jobs, according to FiercePharma this past August. Further, the company estimated it had another 3,800 job cuts still to come. The fact that Merck is delivering operating sales growth while cutting nearly half of its workforce in a five-year span is a testament to Merck's ability to improve its efficiency in order to drive results.

11. Bolt-on growth: Another selling point for Merck is that it supplements its in-house research with inorganic growth. In 2015, Merck closed its $9.5 billion deal to buy acute hospital care company Cubist Pharmaceuticals, and in 2014 Merck gobbled up clinical-stage drug developer Idenix Pharmaceuticals for $3.85 billion to complement its own hepatitis C pipeline. Acquisitions provide a quick way for Merck to expand its therapeutic reach.

12. Keytruda: If there's a single drug to be excited about in Merck's product portfolio, it's cancer immunotherapy Keytruda. Keytruda has already been approved to treat metastatic melanoma and second-line metastatic non-small cell lung cancer in patients with high PD-L1 expression. What's more amazing is that Merck is conducting more than 200 clinical studies and 80 combination studies across 30 tumor types for its thus far wildly successful cancer immunotherapy.

13. Zepatier: Also exciting is the fact that Merck's hepatitis C double therapy known as Zepatier was recently approved by the Food and Drug Administration. Even if it fails to unseat Harvoni as the primary HCV treatment, there are some 180 million people worldwide suffering from HCV according to the World Health Organization, giving Zepatier a long-tail opportunity to make a difference.

14. Biosimilars: Merck also has a growing portfolio of biosimilars, or biologic drugs designed to be copycats of innovative therapies. While presenting at the Cowen Healthcare Conference in early March, Merck highlighted five biosimilars that are slated for regulatory submission between 2016 and 2017. These biosimilars would be going after products with more than $30 billion in combined annual sales.

15. Animal health: It might be Merck's forgotten program, but its animal health segment appears poised to benefit from two major trends. First, medicines to keep livestock healthy should see increasing demand over time as food demand grows in step with the global population. Secondly, we continue to see companion animals viewed more and more as members of the family, and people are willing to pay hefty amounts to ensure the health and comfort of their pets.

16. Valuation: Last, but not least, Merck offers investors an attractive valuation relative to the broad-based S&P 500. Merck's forward P/E is currently just below 15 compared to the forward P/E of the S&P 500, which is about 17.4.

What factor stands out to you as Merck's most attractive selling point?