Its plan to survive to thrive will only work if oil and gas prices cooperate.

While we all look at risk through different lenses, most of us would agree that, when a company is reliant on outside factors for its success or survival, it becomes a riskier bet. For example, when a company is dependent on higher oil prices just to survive, or new natural gas export projects to be built to drive growth, it's a much riskier company than one that can both survive and thrive in the current weak environment. Pengrowth Energy (NYSE: PGH), which needs both higher oil prices and Canadian natural gas export projects to drive its future, is at the higher-end of the risk spectrum.

Survive to thrive
Pengrowth Energy's current catch phrase is "survive to thrive." In order to survive, the company is doing everything in its power to make sure it has the cash to get through the current downturn so that it can catch the next wave higher. Unfortunately, no one knows when, or even if, that upturn will ever occur.

Pengrowth, however, is mainly concerned with just making it through next year, which is when it faces a maturity wall, as more than $500 million of its $1.8 billion in outstanding debt comes due. As the slide below shows, the biggest tranche of debt on the company's books is coming due next year, which is a bad time considering that we're still in the middle of the deepest downturn the energy sector has experienced in decades. 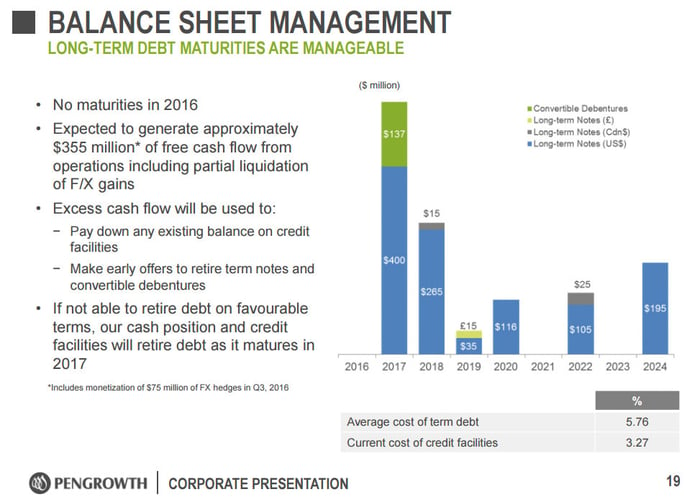 As that slide notes, the company's plan is to use $355 million of internally generated cash flow to address the bulk of this looming maturity. The company is able to generate this cash flow because it has gone into survival mode.

It cut its capex budget from the $184 million it spent last year to just $60 million to $70 million this year, which isn't even enough money to maintain its production rate. In fact, the company isn't drilling a single new well this year; instead, it's allocating a little bit of capital to advance some of its long-term projects, as well as on asset integrity and maintenance programs.

That's not a spending rate it can maintain over the long term. That's evident when looking at the company's production, which will slump from last year's average of 71,409 barrels of oil equivalent per day, or BOE/d, to just 60,000 BOE/d in 2016. While some of that decline is due to asset sales and the shut-in of uneconomic production, the bottom line is that Pengrowth needs higher oil prices just to supply it with the cash flow to keep its production flat, let alone grow.

Contrast this with the much-larger Suncor Energy (SU -1.67%), which has the cash on hand, plus the cash flow to not only invest what's needed to maintain its current production rate, but to invest heavily into future growth. In fact, 55% of the capital Suncor Energy plans to spend this year is earmarked as growth capital, primarily being invested in projects that won't deliver a drop of oil until the end of next year. Once complete, both projects will deliver low-cost oil supplies for years, if not decades, to come.

Growth is out of its own hands
Pengrowth's hope is that, by focusing on survival during the next year, it will be in a position to thrive when conditions improve. However, if conditions don't improve, the company will remain at risk because higher oil prices are a must in order to provide it with the cash flow it needs to develop its thermal oil upside at Lindbergh. In fact, the company estimates that it would require $6.6 billion of investment to develop these oil resources alone. However, that's growth it can't tap if oil stays low for the long term.

Its other long-term growth asset, the Montney shale gas field, also requires billions in future capital investments, as well as access to global markets. However, unlike oil that can be sent via pipeline or train to the coast, and then exported overseas via tanker, natural gas requires a specialized liquefaction facility in order to prepare it to be shipped overseas.

To date, not one of the 20 proposed liquefaction plants along Canada's West Coast has even started construction. That means Pengrowth's natural-gas growth potential in the Montney might never be fully realized because its gas won't be able to get to the more-lucrative Asian markets.

Investor takeaway
Pengrowth Energy is a pretty-risky energy stock because its sole focus right now is on survival, due to a wall of debt maturities to overcome next year. Further, if oil prices don't improve, it won't have the cash flow it needs just to maintain its production in the future, nor to develop Lindbergh.

On top of that, it's relying on others to build the LNG export facilities that need to be in place so it can develop its gas assets in the Montney. Bottom line, this is a pretty high-risk oil stock right now.