Med-tech, mining, and oil are quietly emerging as important investing trends in 2016. 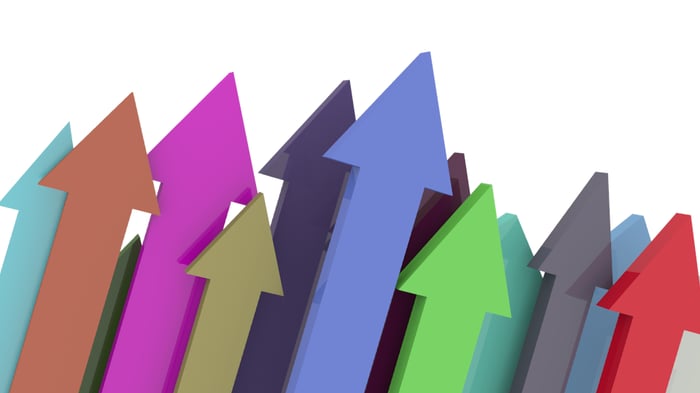 These trends appear to be on the upswing. Image source: Flickr user FutUndBeidl.

While more than a quarter of 2016 is now complete, there are still opportunities to cash in on a number of stock market trends that have emerged since the calendar flipped. In fact, now might just be the best time to buy into these trends because most investors don't yet see their potential.

Here are three stock market trends that have caught our eye, and the best way to bet on each one.

Todd Campbell: One of this year's most interesting -- and perhaps overlooked -- stock market trends is the widespread embrace of medical device stocks. While the Nasdaq Biotechnology ETF (IBB 2.16%) has fallen 24% since last June and the Healthcare Select Sector SPDR ETF (XLV 1.12%) has slipped 2.4% in 2016, the iShares US Medical Devices ETF (IHI 1.88%) has returned 7.7% since June and 4.2% this year. That's some pretty impressive outperformance, especially when you realize the S&P 500 ETF (SPY 1.06%) is only up 2.4% in 2016.

The growing interest in med-tech is tied primarily to two things. First, these stocks were largely ignored in the biotech-fueled healthcare run-up the past few years because they're slow growers that don't have the same cache. Second, medical device stocks have been unfairly weighed down by the institution of a 2.3% tax since Obamacare's passage, but in December, the tax was suspended for two years.

Of course, no one knows when the run-up in medical device stocks will stall, but with an aging and increasingly insured American population requiring more procedures every year, tailwinds supporting sales and profit shouldn't end anytime soon, and that means investors might want to put a bit of the money they've earmarked for healthcare into them. If you're not sure what individual medical device stocks to buy, then the US Medical Devices ETF might be the best way to go.

Sean Williams: I can only imagine this is one of the last industry trends you'd expect any of us to suggest, but I'd encourage investors to give some credence to the mining sector, which is benefiting from gold and silver prices finally finding some support.

Gold was the standout in the first quarter, rising 16.5% for its best single-quarter performance in 30 years! A number of factors have been fueling gold. We have global uncertainties tied to China's slowing growth rate and sluggish GDP growth in the United States; there's also an increase in physical demand for gold, especially by central banks. But most important is that negative interest rate policies, as well as low-yield environments in developed countries like Germany and the U.S., make gold, a non-interest-bearing asset, seem all the more attractive.

What's particularly notable among miners is that they've learned an important lesson about willy-nilly expansion. After a decade-long rise in gold prices, miners were expanding with no regard for cost, and since 2011, miners have paid for that choice dearly. Metal miners coping with falling prices have learned to control expenses and improve production efficiencies while modestly expanding production over the past four-plus years. The result is some fairly attractive investment opportunities in the metal mining industry.

Sometimes the best examples of this can be seen in junior miners like Richmont Mines (NYSEMKT: RIC). Richmont's crown jewel is its Island Gold Mine, which has seen production grow from nearly 9,000 gold ounces in Q4 2014 to 26,589 ounces in Q1 2016. All the while, total cash costs at Island Gold have plunged from $1,151 an ounce in Q4 2014 to $491 an ounce in Q1 2016. Richmont has consistently been exceeding its production goals and coming in well under its expense expectations. If that's not enough, it's carrying a healthy $61 million in cash as of the end of Q1, giving it plenty of flexibility. Even after its incredible run higher this year, a forward P/E of 15 could still prove inexpensive if gold rises further, or if Richmont Mines' expenses fall further.

Matt DiLallo: The oil market is currently in the midst of one of its worst downturns in decades. A battle for market share between OPEC and non-members created a gusher of oil hitting the market at a time when demand has been a bit weaker than expected. There's so much crude oil floating around the market right now that the world is running out of places to store it, with 538.6 million barrels of crude sitting in storage in the U.S. alone. Not only is that a historically high inventory level for this time of year, but at our current consumption rate of 19.4 million barrels per day, it would take the country nearly a month to use all of that oil if we completely turned off all supply.

Turning off the country's oil pumps as well as its imports isn't going to happen. That said, what is happening is a significant drop in investments in new wells, which is expected to lead to a big drop-off in U.S. oil production later this year. In fact, the International Energy Agency sees the biggest non-OPEC production drop in 25 years just around the corner, estimating that we'll see upwards of 700,000 barrels per day of production declines by the end of this year, most of which will come from U.S. shale plays. That should help rebalance the oil market by the end of the year, leading to a meaningful improvement in the oil price.

Higher oil prices would push energy-focused ETFs like Energy Select Sector SPDR ETF (XLE 1.50%) or the more U.S.-focused iShares US Energy (IYE 1.31%) to even bigger gains than the double-digit rebounds they've enjoyed so far this year: 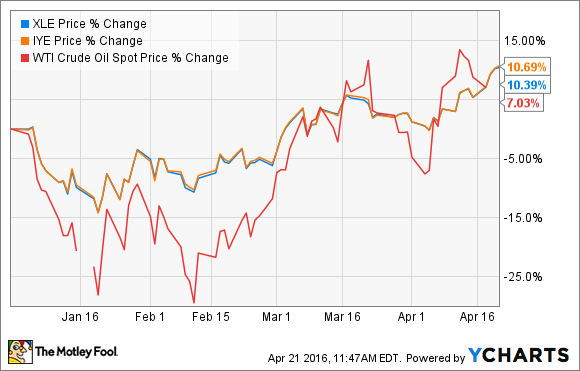 For investors willing to look past the current oil market and see the rebalancing trend that's starting to play out, there's a lot of money to potentially be made by taking a bet on the broad industry exposure of an energy ETF like Energy Select Sector SPDR ETF or iShares US Energy.