Please ensure Javascript is enabled for purposes of website accessibility
Log In Help Join The Motley Fool
Free Article Join Over 1 Million Premium Members And Get More In-Depth Stock Guidance and Research
By Reuben Gregg Brewer - Apr 23, 2016 at 10:14AM

The coal industry is on the outs, but if you're adventurous, you may still want to play the space. Here are two options.

In 2015, Alliance Resource Partners LP's (ARLP -0.26%) business started to feel some of the coal industry pain that's pushed many of its peers into bankruptcy. That said, it's still one of the best positioned miners in the space. But is it the best way to play in the coal arena? Competitor Westmoreland Coal (WLB) has a vastly different business approach, but one that may, in the end, have longer legs.

It's worth pitting the two against each other if you are examining the moribund coal industry for a contrarian turnaround play.

Location, location, location
Leading up to 2015, Alliance Resource Partners was increasing its coal production and sales even while competitors were going the other way. The reason was location. Alliance's coal comes predominantly out of the Illinois Basin region. This area produces desirable coal that was able to take market share from other regions. Thus, Alliance was able to keep producing and selling more and increasing its distribution every quarter along the way.

However, the bad coal market finally started to catch up to Alliance last year. In the third quarter, it stopped increasing its distribution. And when it announced fourth-quarter results, it said production and sales were heading lower in 2016. The shares have sold off, hard, over the past year or so. That said, assuming things don't get any worse, Alliance expects to cover its massive 20%-plus distribution by 1.1 times this year.

If you are an adventurous sort with a contrarian bent, that could be a pretty enticing story. The problem, of course, is that it assumes nothing changes in the coal industry. Since the bad news is starting to catch up to even the Illinois Basin miners, that's a lot of uncertainty to take on. What if there were a different model?

The mouth
Alliance's biggest customers are utilities. Westmoreland serves those same customers, but it focuses on owning what are known as mine mouth coal mines. That means they're located right next to the utilities plants they serve. This changes the equation in a big way. 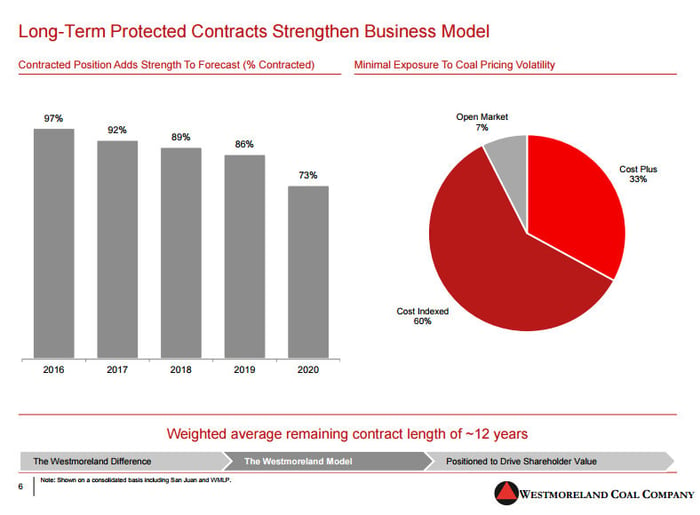 Oh, and there's one more big difference, here. Alliance has coal supply contracts that last a couple of years at most. Westmoreland's average contract has another 12 years or so to run. That gives the miner a lot of breathing room, and it allows it to avoid the storm of falling demand that's even started to overtake Alliance.

Which is better?
Trying to decide if Alliance or Westmoreland is the better coal investment is a tough call to make. For example, if you're looking for income, Westmoreland is a bad choice because it doesn't pay dividends. And even though Alliance's unit price appears to be factoring in a dividend cut, a 50% haircut would still leave you with a hefty 10% distribution yield. The big risk, however, is now that Alliance is starting to feel the pain of the coal market, how bad could it actually get before it starts to get better? There's no good answer for that as a coal miner trading in the commodity markets.

However, if you are looking for a beaten-down coal miner that looks like it will be able to survive this deep and long downturn, Westmoreland's unique business model looks like it might be better situated than Alliance's approach. It's true that the other side of this downturn is hard to see today, but as supply and demand balance out, coal prices will stabilize. And coal is still expected to play an important role in power production for decades into the future. In fact, even taking into account new clean power rules, the industry is expected to sell 800,000 million tons of coal as far out as 2040 according to the U.S. Energy Information Administration. So coal isn't dead, even though it looks that way today.

Now, you could argue that Westmoreland is dependent on the power plants it serves remaining operational, but you could also argue that the power plants are just as dependent on Westmoreland's coal. As long as those plants keep running, Westmoreland has a happy customer consuming its low-cost fuel. So, for the contrarian who doesn't care about distributions, Westmoreland is a niche player that could end up being the best protected coal miner around. And, if things go as planned, the company will use the downturn to pick up mines that fit nicely within its niche (it just did a deal in February). That will allow it to grow its business and come out a stronger company when the coal market finally stabilizes.

At the end of the day, both are risky but both have appeal in different ways. Just make sure you're willing to take on the uncertainty of a still-volatile coal industry before you take the plunge with either of these miners.