During the recent downturn, investors have found renewed appreciation for Exxon's chemicals business.

Its upstream and downstream segments typically get all the attention, but if it were a stand-alone business, ExxonMobil (NYSE: XOM) Chemical would be the world's fifth largest chemical company. With its upstream segment struggling from collapsing oil prices, the chemicals segment grew from 12% of earnings to 24% in just one year. Unless oil quickly rebounds, this long-forgotten segment will remain an important driver of positive earnings.

What can investors expect from Exxon's chemicals division?

Last year, Exxon's earnings were down 48%. Without its chemicals or downstream segments, profits would have collapsed 74%. While it tends to be underappreciated whenever oil prices hit triple digits, the company's integrated approach is what allows it to invest billions in new projects across the entire business cycle. Exxon's model also gives it the rare opportunity to invest with decades in mind, not months.

Both its downstream and chemicals segments helped Exxon maintain profitability as oil prices collapsed. However, chemicals may have even more to contribute if prices remain lower for longer.

Chemicals could become critical
Every day that oil fails to stage a meaningful rebound, Exxon's other segments become less valuable.

According to the US Energy Information Administration, global oil production is roughly 2 million barrels per day above consumption. According to Giovanni Serio, global head of research at Noble Group, "[w]e are in a bearish market, but oversupply in crude creates an incentive to do something with that" . Lately, downstream margins have increasingly come under pressure as more refining capacity is brought online in response to elevated industry profitability.

Downstream isn't the only segment facing mounting pressure. Despite oil's average of $50 a barrel in 2015, upstream earnings fell roughly 75%. With earnings per barrel approaching breakeven levels, the segment's profitability could be completely wiped out with oil below $40. 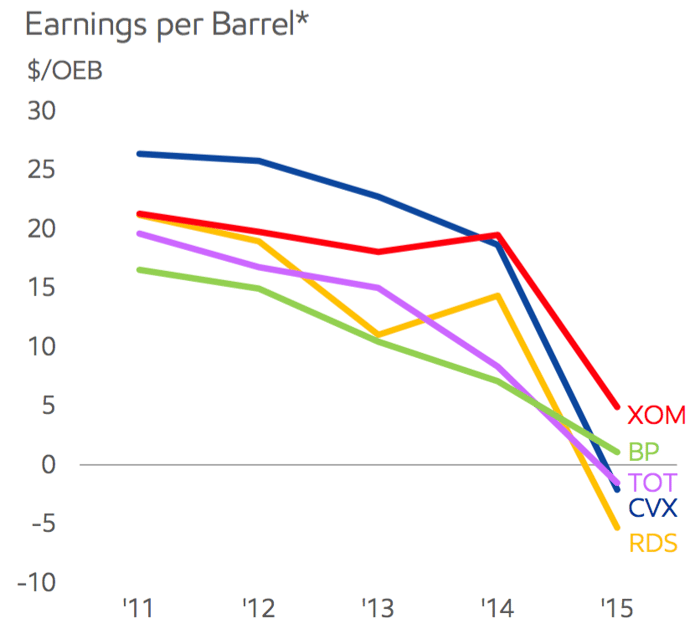 The good news is that positive earnings growth should continue at Exxon's chemicals division regardless of oil prices.

A new report from analytics company IHS found that ExxonMobil is ramping up investment in its chemicals division to help ensure it can thrive in a low-oil-price environment. "ExxonMobil chemical has significant opportunities and competitive advantages in terms of its proprietary technology, global scale, and an integrated system that allows unique operational efficiencies," said Dave Witte, senior vice president of IHS. "The company is expanding its Baytown, Texas, and Mont Belvieu, Texas, complexes, which are scheduled for completion in 2017. In addition, the company started its second Singapore petrochemical complex in 2013 to target the high-growth Asian market and is strategically investing in new elastomer capacity in both Singapore and the Middle East."

As with Exxon's other segments, economies of scale should ensure the company's chemicals division remains profitable even if competitors scale up their own facilities. Its refineries, which produce most of its chemicals, are 70% larger than the industry average. With 35 million tons of chemicals production, Exxon's cost advantage isn't going away anytime soon.

In world with low, stagnant oil prices, Exxon's chemicals division has the potential to contribute more than 50% of earnings. While that's a bit misleading considering the company's other segments would probably be experiencing dramatically depressed profits, it's yet another testament to Exxon's diversified business model.

So no, chemicals won't completely save the company, but it should provide an additional level of stability should oil fail to sustainably rebound this year.