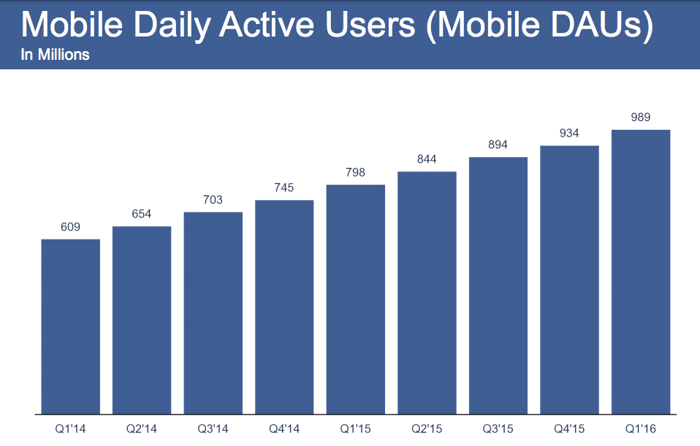 Facebook (FB -1.73%) reported earnings for the first quarter of 2016 on Wednesday, April 27. The company has delivered impressive performance over the past several quarters, and expectations were already quite high for Facebook leading to the report. However, the company still managed to beat those demanding expectations, and Facebook stock was rising by an explosive 9% on Wednesday after the closing bell.

A big and profitable network
Facebook ended the third quarter of 2016 with 1.65 billion monthly active users, a healthy 15% increase versus the same period in 2015. Daily active users grew 16% year over year, amounting to 1.09 billion. Daily users represent 66% of all monthly users, a small increase from 65% in the first quarter of 2015. Even if Facebook has already reached a gargantuan scale, the user base keeps growing at a nice rate, and activity levels show that engagement remains on the rise.

The company is also reporting impressive performance in mobile, a crucial growth segment in the industry. Mobile monthly users stand at 1.51 billion, growing by 21% versus the same period last year. Daily active users in mobile platforms grew 24%, ending the quarter at 989 million.

The numbers look even better when compared against Twitter (TWTR -0.89%) and its user statistics for the same period. The short-message social network ended the first quarter of 2016 with 310 million monthly users, and the user base grew only 3% year over year. Even worse, Twitter is completely stagnant in terms of user growth in the United States. Twitter is just no match to Facebook in terms of size or growth, showing that not every company in the social network industry is enjoying the same kind of performance as Facebook.

Importantly, Facebook is also making huge progress in terms of monetization. Average revenue per user was $3.32 last quarter, a 33% increase versus $2.50 per user during the first quarter of 2015.

Booming sales and earnings
Total revenue during the quarter grew 52%, reaching $5.38 billion. Excluding the unfavorable impact from currency fluctuations, the increase in constant currency revenue would have been an even stronger 58%. Advertising revenue amounted to $5.2 billion, growing by 57% in U.S. dollars and by 63% on a constant currency basis. Mobile advertising was a major driver during the quarter, accounting for 82% of advertising revenue. That's up from 73% in the first quarter of 2015.

Facebook is investing tons of money in technology and all kinds of growth projects, so total expenses increased 41%. Nevertheless, revenue still outgrew costs, so the operating margin jumped from 26% of revenue to a much bigger 37%.

Booming sales and expanding profit margins was a powerful combination for Facebook during the quarter, and earnings per share grew by a staggering 189%, from $0.18 to $0.52 per share.

Mark Zuckerberg's company
Facebook also announced that it will create a new class C stock, which will have the same economic rights as the current class A and class B shares but will have no voting rights. Facebook currently has a dual-class structure: Class A shares trade in the stock market and have one vote per share, and class B shares are mostly owned by insiders, don't trade in the stock market, and have 10 votes per share.

If the proposal is approved, Facebook will issue two shares of class C stock as a one-time stock dividend for every outstanding share of class A and class B common stock. The main idea behind this move is making sure Mark Zuckerberg's voting rights won't get diluted in the future, so that the company's founder and CEO will keep calling the shots even if his economic ownership is diluted away via new stock issuance in the coming years.

According to the press release: "This proposal is designed to create a capital structure that will, among other things, allow us to remain focused on Mr. Zuckerberg's long-term vision for our company and encourage Mr. Zuckerberg to remain in an active leadership role at Facebook."

In all, it was quite a strong earnings report from Facebook, as the company delivered impressive performance in key areas such as users, revenue, and profits. As long as the company continues producing this kind of growth, investors in Facebook will probably sleep well at night knowing that Zuckerberg is holding the reins.