Please ensure Javascript is enabled for purposes of website accessibility
Log In Help Join The Motley Fool
Free Article Join Over 1 Million Premium Members And Get More In-Depth Stock Guidance and Research
By Reuben Gregg Brewer - Apr 28, 2016 at 10:38AM

Ritchie Bros. is doing pretty well right now, but here's one important number to keep an eye on.

When you think of online auctions, names like eBay are probably at the top of your mind. In fact, you might think that the construction equipment Ritchie Bros. Auctioneers (NYSE: RBA) sells is safe from online competition because they are gigantic machines. You'd be wrong. And that's why 50% is the number to watch at Ritchie Bros.

Around the world
Ritchie Bros.' business is to sell gigantic equipment -- the types of things used to build stuff like houses, skyscrapers, and roads. In fact, with the oil and gas industry in the dumps, Ritchie Bros. is looking to see if there's a bigger role for it to play in that space, too. The takeaway is that these are expensive and often highly specialized machines that are sold to a limited set of discerning buyers.

That's why Ritchie Bros. was able to generate $4.25 billion in sales last year with just 44 locations. Despite the scale of the equipment, that kind of money is attracting competition from what may seem an unlikely source, the Internet. If you can buy groceries over the Internet, why not a backhoe?

Owning it
That's why 50% is such an important number. Roughly half of Ritchie Bros.' winning bids come from locations that are outside the region in which an auction takes place. Those bids are coming through the company's Internet operations. So Ritchie Bros. isn't some old-line business. It's made sure to keep up with the online competition.

While Ritchie Bros. isn't surprised by the success of the online heavy equipment business, some industry watchers might be. According to Karl Werner, one of Ritchie Bros.' top-ranking officers, "When we launched it, there were estimates that online proceeds would never exceed $10 million per year." That was a statement made in early 2014, after an auction where online sales totaled $54 million -- for a single auction. Clearly, Ritchie Bros.' business goes hand in hand with the Internet.

While it's great that Ritchie Bros. has been so proactive online, it can't stop now. Why? The company estimates that it controls less than 2% of the global market for used equipment. To be fair, the business is highly fragmented, so acquisitions are likely to play a big part in Ritchie Bros.' growth. But this is exactly the type of inefficient market that Internet companies love to disrupt. 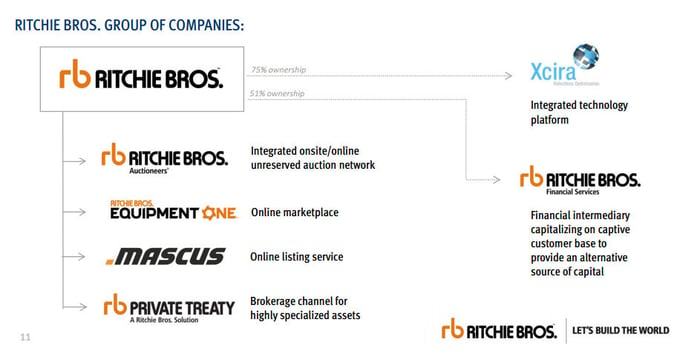 The bits and pieces that make up Ritchie Bros.: Online gets three spots on the list. Image source: Ritchie Bros.

An acquisition example
So Ritchie Bros. needs to focus not just on its brick and mortar business, but also on ensuring that it also properly supports its Internet platform. Take, for example, the company's nearly $27 million purchase of Mascus in February. Mascus is a leading European online listing service for heavy equipment and trucks.

This deal, however, is about more than just expanding the company's online community. Mascus provides access to a new set of tools and allows Ritchie Bros. to offer another service to existing customers, deepening relationships. CEO Ravi Saligram explained, "Combining Ritchie Bros.' current capabilities with Mascus' solutions will enhance the end-to-end services that we can provide to OEMs, dealers, and private equipment sellers."

Not-so-foolish takeaway
When you look at Ritchie Bros. don't get stuck on the idea that large equipment can't be sold online. It can, and it increasingly is. And while Ritchie Bros. has done a great job to ensure that its business grows to include the online space, Internet communities are fast changing. While I can't tell you that 50% is the right or wrong number for Ritchie Bros., what I can tell you is that any big change in that figure is something to pay close attention to. Ritchie Bros. simply can't afford to let its Internet business slide, so make sure to keep an online eye on this heavy-equipment auctioneer.