Enterprise Products Partners' (EPD 2.02%) business model is the same as the moral of the story of the tortoise and the hare: Slow and steady wins the race. This most-recent quarter was another example of this approach, as the company was able to stave off the threat of lower oil and gas prices by continually investing in its pipeline and logistics network through the cycles of the industry.

Let's take a quick look at the numbers for Enterprise's recent quarter, and learn how the company tries to maintain this kind of performance while the energy market remains downtrodden.

Overall, Enterprise's results weren't what you would call a blow-out quarter, as weak commodity prices had some minor effects on earnings. At the same time, though, they have held up relatively well considering price declines in both oil and gas.

The largest reason why results have remained steady during the past several quarters has been that completed projects have offset any declines related to lower volumes and lower commodity prices in its existing system. Here's how Enterprise's business performed by segment. 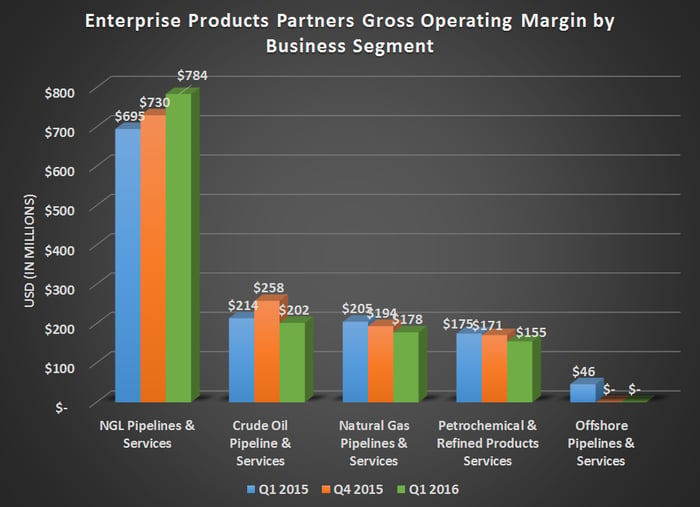 It should be noted that Enterprise sold all of its offshore pipeline assets in the third quarter of 2015; in the coming quarters, this business segment will no longer be reported.

What happened with Enterprise this quarter?

What management had to say
Very rarely does Enterprise's CEO give anything more than a matter-of-fact statement at the earnings release, and James A. Teague's comments about this past quarter were no different. He did give some indications about the company's capital spending plans during the next couple of years that should give investors some clarity about possible future distribution increases

We successfully completed $300 million of organic growth projects in the first quarter of 2016 and are on schedule to complete and begin commercial service on another $2.2 billion of growth projects during the remainder of 2016. This includes two natural gas processing plants and related infrastructure serving the Permian basin; our ethane export terminal on the Houston Ship Channel; and additional crude oil storage infrastructure in the Houston and Beaumont areas. We have a total of $4.2 billion of growth projects scheduled to be completed in 2017 and 2018. Our commercial team continues to progress on several projects that are still in the development phase.

With its investment-grade rating still intact, and the ability to generate a decent amount of cash internally to support growth, Enterprise should be well positioned to execute on these projects, even during this downturn. That bodes well when we start to see an eventual recovery in the oil and gas space.

Enterprise Products Partners has been able to weather the storms in the energy market much better than others. Much of that has to do with its more-conservative approach prior to the crash, as management kept a pretty-large cushion between the amount of cash coming in the door, and how much it paid to shareholders. This quarter was further evidence that this approach is working rather well for the company, and should position it to do even better once oil and gas activity across the U.S. picks back up again.