CEO Chip Perry has made quick work of his promise to begin mending the relationship between TrueCar and its dealership network.

Shares of TrueCar (TRUE 3.65%) have been volatile during the past 12 months, and that's putting it mildly. It's had multiple pops of 10% or more, and plenty of staggering drops two or even three times as steep. On Friday, though, TrueCar's stock popped another 10% higher, except this time, the news driving it could give investors hope that a turnaround is possible – and perhaps sooner rather than later. Let's dig in. 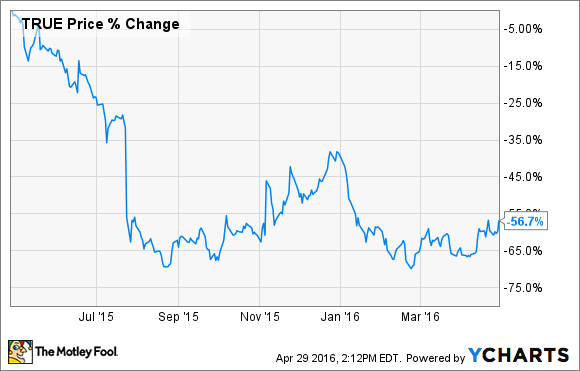 What happened?
Investors in TrueCar surely remember last summer when AutoNation (AN 2.87%) and TrueCar had a pretty messy split with disagreements over data sharing. The disagreement was largely over TrueCar wanting all of the dealer group's transactions so it could search its own database for a matching consumer, and thus properly -- or improperly, depending on which side you ask -- charge AutoNation for a completed sales lead.

However, looking at it from AutoNation's perspective, what if a consumer was already planning to purchase a vehicle, and once on a dealership lot, decided to check a price on TrueCar at the last second? It's this vast grey area that has made the relationship between TrueCar and its dealership network rocky.

Now, according to Automotive News, almost a year after the split, AutoNation will begin using TrueCar again at 55 of its dealerships in a testing situation starting as soon as this weekend. "We had a complete breach in the summer of 2015 on very substantive issues with no way forward," AutoNation CEO Mike Jackson told Automotive News today. "We wouldn't be sitting here speaking today if TrueCar hadn't brought in a leader with the integrity and stature of Chip Perry."

Looking at the details, this test will last between 30 to 60 days at dealerships. At the end of the second quarter, the ball will be in AutoNation's court to decide what path the two will continue to take.

So what?
This might seem like only a small test, considering it's only 55 stores out of AutoNation's roughly 375 dealerships, but it's a huge statement and validation of the recent strategy TrueCar dished to investors and dealerships alike. Not only that, but if the two decide to revive the full relationship, AutoNation would again become TrueCar's largest client.

Investors are probably more optimistic that this development speaks to the validity of TrueCar's recent "Dealer Pledge," which set forth a multitude of strategies to better serve consumers, as well as dealerships.

Dealership pages will be much more friendly and effective. Image source: TrueCar.

Further, it will commission a third-party entity to verify its adherence to the data policies. TrueCar will also make its website promote dealerships in new ways, a process that, in the past, left dealerships commoditized competing on price alone, and left them essentially faceless.

This attempt at mending the relationship between TrueCar and its dealership network extends beyond AutoNation, but the fact that this is taking place so quickly after newly appointed CEO Chip Perry hit the pavement to fix things, is a very good sign for things to come.

Daniel Miller owns shares of TrueCar. The Motley Fool recommends TrueCar. We Fools may not all hold the same opinions, but we all believe that considering a diverse range of insights makes us better investors. The Motley Fool has a disclosure policy.