While Suncor was able to lower costs and make some aggressive acquisitions for a better future, its recent strong results were from a revaluation of its U.S.-denominated debt.

As oil and gas prices have declined, one of the assumptions Wall Street has made about oil and gas companies is that those with exposure to oil sands will be some of the most deeply affected. Based on Suncor Energy's (SU 0.37%) recent results, though, it would seem that this isn't necessarily the case. Sure, cheap oil has taken its toll on earnings, but beneficial factors such as foreign exchange rates and improving performance at Suncor's oil sands facilities has helped mitigate some of the pain.

Let's take a quick look at the numbers for this past quarter, and check in on some of the company's most-recent moves to see what investors can look forward to in the future.

As you might expect, lower oil prices had an impact on the company's business, but there were some things that were working in Suncor's favor that helped to generate profits this quarter. A large part of it had to do with an $885 million non-cash gain on the revaluation of its debt denominated in U.S. dollars. That gain was in the company's corporate, energy trading, and eliminations segment, so it didn't really change the earnings performance of the individual segments. Here's how those segments did. 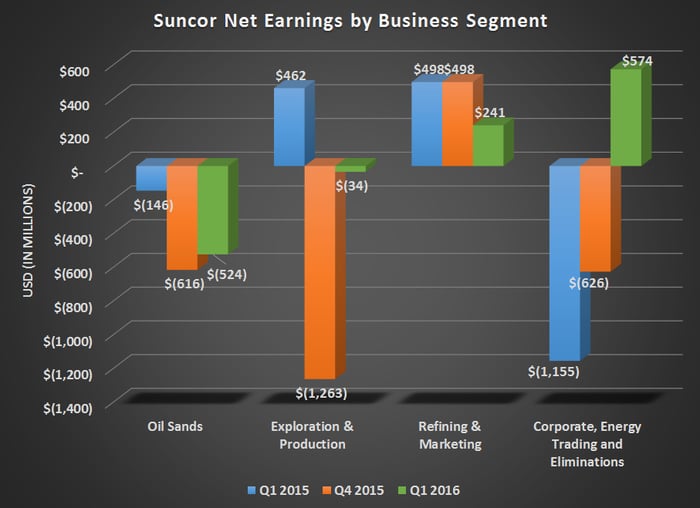 With so many charges related to foreign currencies and asset writedowns, Suncor's earnings can look pretty skewed from a quarter-to-quarter basis, but it's much harder to skew figures like operational cash. For the quarter, the company's operational cash flow declined 53%, to $682 million. This decline in cash is a rather inopportune time for Suncor, as it is just now ramping up construction of its Fort Hills oil sands project that is expected to be operational by 2017.

Straight from management
Like other oil and gas companies that have assets across the value chain in oil, Suncor CEO Steve Williams was quick to point out in his statement that the company has been able to keep from suffering deep losses thanks to its more-diversified business model:

Suncor's ability to generate cash flow from operations, combined with the strength of our balance sheet, allowed us to maintain our dividend and continue investing in long-term profitable growth projects, even in the poor price environment we saw in the first quarter. We continue to capitalize on opportunities, such as increasing our investment in the Syncrude asset, to generate long-term value for our shareholders.

One thing that you have to give Suncor credit for is going out and making some moves while oil prices remain disastrously low. By acquiring a much-larger stake in Syncrude through both the Murphy Oil and Canadian Oil Sands Limited acquisitions without stretching itself too far with debt, the company should be able to reap strong rewards from this move when oil and gas prices rebound.

Outlook
The increased stake in Syncrude, and the development of the Fort Hills project, will fuel some pretty significant increases in production for Suncor. Management expects these two projects and other smaller additions will generate 6% production growth annually until 2019.

On top of that, Suncor expects to reduce its operating costs by $500 million this year, and that's on top of the $900 million in savings the company realized between 2014 and 2015. These moves aren't leading to large profits today, but they will do wonders for the income statement as oil and gas prices rise.