Investors aren't too happy about the biotech changing its clinical trial design.

What: ImmunoGen (IMGN 0.71%) reported its fiscal third-quarter earnings on Friday, and fell as much as 22%, but it wasn't the biotech's revenue or loss that has investors hitting the sell button.

So what: For the record, ImmunoGen reported revenue of $19.7 million, up from $11.4 million in the year-ago quarter, thanks to a $10 million milestone earned from its partner Bayer. And the biotech lost $31.9 million, more than the $21.6 million it lost a year ago -- but still completely reasonable given that ImmonGen has $182.9 million sitting in the bank. 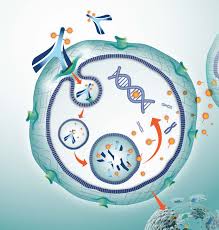 Instead of the earnings numbers, it appears that investors are concerned with ImmunoGen's disclosure of its plan to change the design of the next clinical trial for its lead-pipeline candidate, mirvetuximab soravtansine. The ovarian cancer trial, dubbed FORWARD I, was previously designed as a two-stage, phase II trial with response rate as the primary endpoint, but ImmunoGen has decided to change it to a single-stage phase 3 trial with progression-free survival as the primary endpoint.

There are a couple of changes here, so let's break it down:

If the new trial produces positive data, the changes will end up being a good move because the number of potential patients in the U.S. increases to 5,000 to 7,000 compared to 2,000 to 3,000 with the old enrollment criteria.

But there are risks associated with the change because ImmunoGen is generating a hypothesis based on a subset of the patients in the earlier trial, and testing the hypothesis in the FORWARD I trial. Investors are worried that the observed benefit by earlier-stage patients is just an artifact.

That view is confounded by management's disclosure that the response rate in the overall population of the phase 1 trial is "a little below 30%" compared to a response rate of 35% that was previously disclosed for the first set of patients enrolled in the phase 1 trial. Management hinted that the subset of phase 1 patients who would be eligible for the new phase 3 had a higher response rate; but we'll have to wait until the American Society of Clinical Oncology (ASCO) meeting in June to see the breakdown of the data.

Now what: This summer, investors will be focused on the ASCO data, while management will be working toward getting the new trial design approved by the Food and Drug Administration. Assuming the FDA signs off, ImmunoGen thinks it can start enrollment in FORWARD I by the end of the year, so it'll be awhile before we get the data, and know if investors are overreacting to the changes.

Beyond mirvetuximab soravtansine, management updated investors on the rest of the company's pipeline. The phase 1 trial for IMGN779 in patients with acute myeloid leukemia has begun enrolling patients. And the company expects to start enrolling shortly for the phase 2 trial testing IMGN529 in combination with rituximab in diffuse large B-cell lymphoma.

With no meaningful revenue, ImmunoGen remains a waiting game, albeit one that may have a little less certainty after today's announcement.